On the first drive of the afternoon, the second-year Buckeyes signal-caller began the game completing six of his first eight throws. Curl routes to tight ends. Check-down throws. Passes completed to the outside to Garrett Wilson and Jameson Williams. Miller seemed to be in control.

But on the last throw of the drive, Miller went for the end zone, forced a pass to Wilson and threw an interception directly into the hands of cornerback Ryan Watts.

The drive showed what Miller can do at the helm of the Ohio State offense. He made quick decisions and was accurate for much of the possession. But the interception visibly rattled Miller, and he wasn’t the same quarterback for the rest of the day.

And a reminder that as the quarterback battle pushes into fall camp, Miller is in the middle of it, fighting for the starting job. And it’s a battle that can’t be defined — won or lost — by just one day in April.

“You can’t go out there and win the job on one play,” Ohio State coach Ryan Day said after the spring game. “It doesn’t work that way. If you go out there and try to force the action, you’re going to get jammed up. When it’s there, you’ve got to take your shot. You have to be calculated, and when it’s there, you have to be aggressive. But a lot of times, it’s cutting your losses. 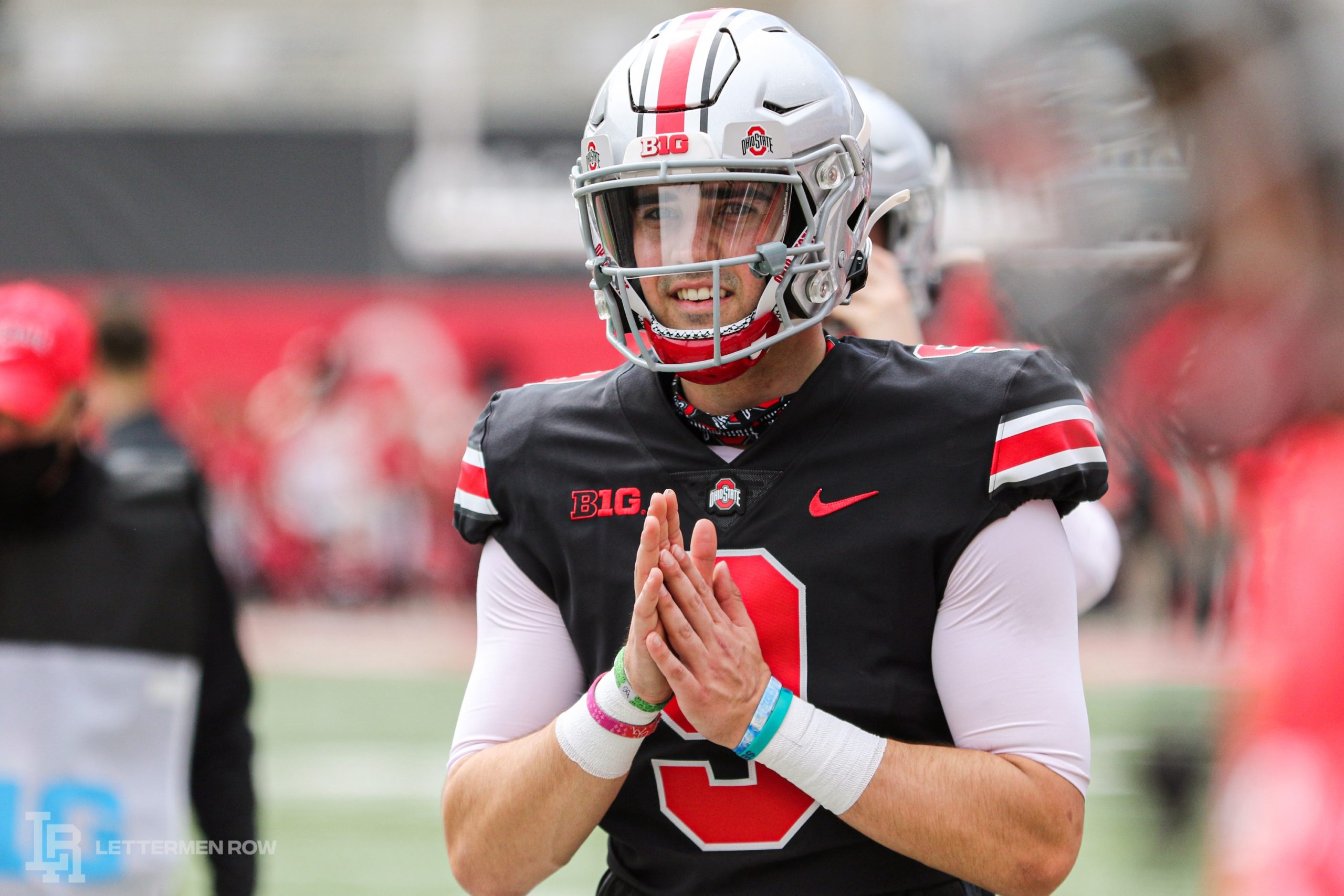 Miller just finished his first full camp in the program after last spring was canceled. He and C.J. Stroud, the frontrunner, have been in the program a year longer than fellow quarterback Kyle McCord, a freshman who arrived in January. After being committed to the Buckeyes for 18 months before signing and enrolling, Miller arrived ready to learn the playbook and go through a spring camp. Those practices were canceled due to the pandemic, setting he and Stroud behind in their development.

Now a year later, Justin Fields is off the roster and in the NFL. Ohio State needs a new quarterback. Although Stroud seems to be leading the way, the former four-star Miller has a chance to wow the Buckeyes coaching staff this fall and come from behind to earn starts.

All three quarterbacks have a chance to do that. Miller can still make up ground and become the next face of the program.

“You can see when you watch [all three quarterbacks],” Day said. “There’s flashes here and there, and then there’s just learning opportunities. The more these guys can prepare and work in the film room and just grind in the meeting rooms, the better they’re going to prepare and be ready for those moments.

“Theyâ€™ve learned a lot, but now the race is on over the next few months to see who can make the next stride so theyâ€™re further along. Spring has been good. There’s been a lot of progress made across the board, but thereâ€™s still a long way to go before Minnesota.”

Miller certainly isn’t a finished product. He makes mistakes, such as the interception in the spring game and other off-target passes that followed it. But with 99 days until kickoff against Minnesota, there’s plenty of time to come from behind and become a starting quarterback for the Buckeyes.

The job can’t be won on any of those individual days over the next three months. But with a collective impressive showing, Jack Miller has a chance to show more of what made his first drive of the spring game possible.

â€œWe talk about it all the time,” Day said. “You canâ€™t go out there and win the job on one play.â€