Ohio State football recruiting can be a wild ride full of twists and turns as recruits from all over the country maneuver their way to signing day. Lettermen Row is here to help navigate the tumultuous roads by getting to the heart of the matter with the young football players and Ohio State coaches and staff members themselves. Today we welcome in the first 2024 prospect to join the show, quarterback Jadyn Davis.

COLUMBUS — It’s not often that a young quarterback commands the type of attention that Jadyn Davis did during his visit to Ohio State last month.

The 6-foot-2, 190-pound rising-sophomore from Catawba Ridge (Fort Mill, S.C.) High School was up bright and early in Columbus on June 22. Before 8 a.m. he had completed an intense throwing workout with Ryan Day and Buckeyes quarterbacks coach Corey Dennis. Following that workout, Davis was all over Ohio State’s enormous campus, but never alone.

The coaching staff wanted to make sure he knew he was a priority.

With talent that reminds many of Justin Fields, there’s a good reason for that.

Ohio State offered Davis after another workout that Tuesday afternoon. The work he put in that day was extensive. Most of it wasn’t even physical, but mental. That’s what stood out the most for Davis about that first visit with the Buckeyes, the chance to break down film of Fields from his first loss as with the Buckeyes — the Fiesta Bowl defeat against Clemson two years ago.

â€œWe went through install, actually,” Davis said. “I feel like if we watched that game again, Iâ€™d pretty much know what the offense is about here.â€ 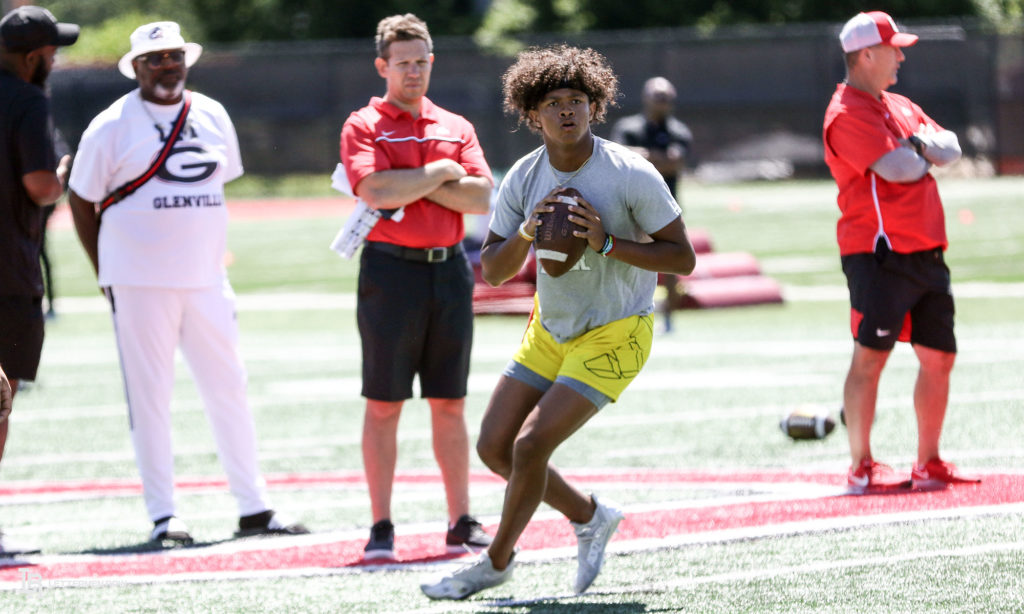 Ohio State target Jadyn Davis has begun to emerge as a top quarterback in the Class of 2024. (Birm/Lettermen Row)

Maybe Davis will get to watch that again on Thursday. The big-time quarterback prospect is heading to Ohio State for the second time in a month to attend a recruiting cookout with the Buckeyes.

What has Ohio State done to show Jadyn Davis that he’s already a top priority for the Buckeyes? What made Ryan Day unique? How did his first real attention on the recruiting trail measure up to his expectations about the process? Does he think about the Justin Fields comparisons?

The young quarterback, a potential 5-star talent in the Class of 2024, joined Birminology on Lettermen Row to talk about that stuff and much more.