The 2024 quarterback has grown sort of used to them by this point. His throwing motion is similar. His frame is reminiscent of the 2021 NFL first-round draft pick when Fields was a sophomore. He works with the same trainers and possesses a similar self-confidence.

If the performance Davis put forward on Tuesday is any indication, the expectations that followed Fields are going to be applied to the 6-foot-2, 190-pound quarterback in the near future, too. Ryan Day, who worked with Jadyn Davis early on Tuesday morning, let the future star know he saw something akin to Fields in him.

“It’s a compliment,” Davis told Lettermen Row. “I’ve heard from different coaches that we have a similar throwing motion but I don’t really hear that. [Ohio State quarterbacks] Coach [Corey] Dennis and Coach Day said I have a lot of similarities. But me and Quincy [Avery], me and Ron [Veal] don’t talk it that much really. I haven’t [spoken to Fields] but I am looking forward to it.

“That’d be a guy I want to meet and pick his brain. That’s my favorite quarterback.”

Ohio State offered Jadyn Davis following his camp performance on Tuesday. Before that, though, Day spent time with the young quarterback breaking down film of the Buckeyes offense. Unsurprisingly, it was film of Justin Fields that was shown. Unexpectedly, though, it was film from one of Fields’ two losses in Columbus. 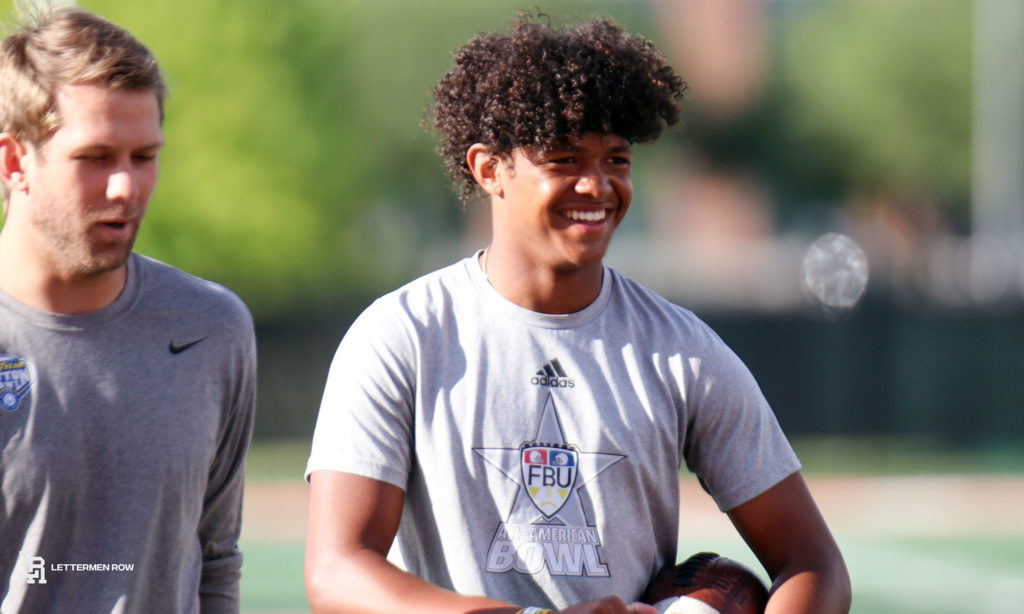 Jadyn Davis was all smiles at Ohio State during his first visit to the school. (Birm/Lettermen Row)

“We broke down the Clemson game, the one they lost,” Davis said. “We went through install, actually. I feel like if we watched that game again I’d pretty much know what the offense is about here.”

So why highlight an Ohio State loss? For Davis, and for Day, it’s simple: The losses teach lessons far greater than the wins do.

“You think about the losses,” Davis said. “Those are the games they really think about. And it wasn’t showing me all bad plays or anything like that. It was just stuff, it was just certain stuff like: ‘These are the throws, this was the read, how can you make it better?'”

Obviously Justin Fields trusted Ryan Day with his development as a quarterback. Tuesday morning gave Jadyn Davis some insight into why that is the case.

“It all transferred,” he said. “Literally every time he would draw something on the white board, he would put up a game clip right after showing how it’s used in a game situation. I love that he’s detail-oriented because that’s how they are at the NFL level, which I aspire to be at one day. I love everything about it, it’s a place I can be developed.”

Davis is originally from Georgia, but now lives outside of Charlotte in Fort Mill, S.C. He likes the city life and felt very comfortable in Columbus. That is one aspect of his first visit to Ohio that surprised him.

“I’d never been in Ohio before,” he said. “So I was thinking there is nothing here. But I like Columbus a lot.”

It’s early in the recruitment of Jadyn Davis. For a talent like him, there will be no shortage of big-time suitors. He’s visited most of them already. Davis knows what makes the nation’s elite programs elite: It’s a tangible feeling when he steps on campus.

“There’s the programs that everybody wants to be at,” he said. “The guys just have a different demeanor. Everybody is chasing their dream of playing at the next level and wants to win a national championship. These big programs, you walk into that locker room and you see why they’re as successful as they are. There’s a different kind of work ethic.”

The work is just beginning for Jadyn Davis. Maybe he’ll get a chance to talk to Justin Fields about some of what to expect next.