The speculation, debate and conversations about Ohio State never end, and Lettermen Row is always ready to dive into the discussions. All week long, senior writer Austin Ward will field topics about the Buckeyes submitted by readers and break down anything that’s on the minds of the Best Damn Fans in the Land. Have a question that needs to be tackled, like the one today about Ohio State andÂ Jaelen Gill? Send it in right here — and check back daily for the answers.

During the recruiting process I seem to remember a certain top notch recruiting analyst, @Birm, suggest that Jaelen Gill may have the potential to be a superstar DB. If it doesn’t click at WR this year is there still time for him to make the change?

The flashes of athletic brilliance have only come sporadically.

A one-handed catch in a spring practice. Catching a couple balls late in a blowout win. Unleashing his dynamic ability to slice through the Rutgers defense for an impressive 32-yard touchdown to finish the scoring in an easy road win.

Jaelen Gill certainly has not been delivering those moments as much as he anticipated since signing with Ohio State. But when they come to the surface, they can be breathtaking — and a reminder of why this offseason and the upcoming spring camp represent such a critical point in his career with the Buckeyes.

The potential has always been clear with the rising redshirt sophomore, though for a couple different reasons it’s been a challenge to tap into it as Gill has dealt with minor injuries and hasn’t quite produced as consistently on the practice field as Ohio State would like. Sometimes it just takes longer for everything to click for players, and there’s still plenty of time for that to happen for Gill as long as progress is made in winter workouts and he maximizes what could be an opportunity for a heavy dose of reps in March and April. 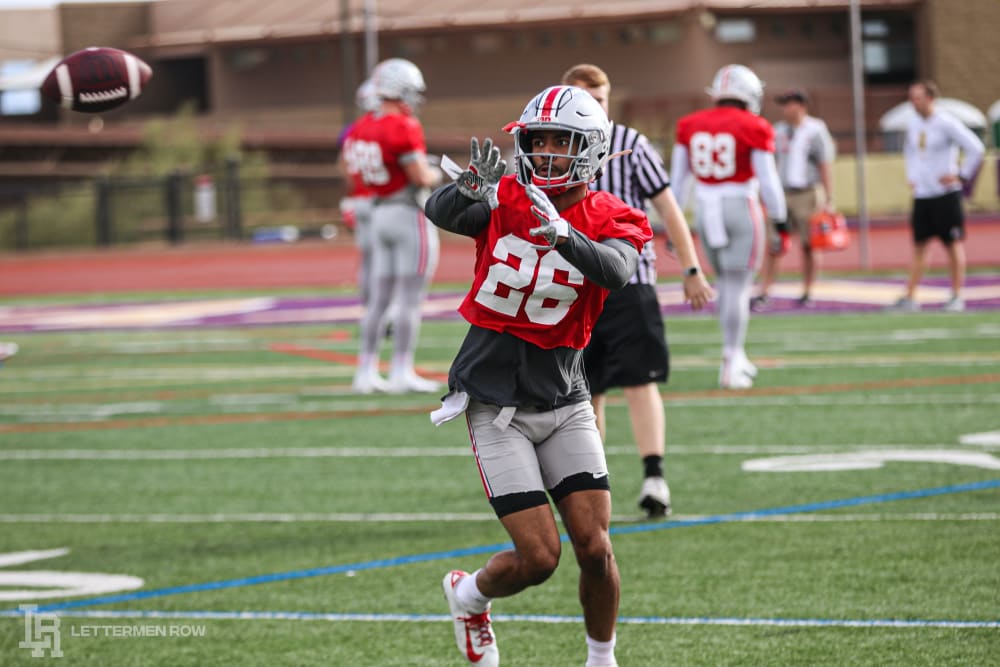 Ohio State athlete Jaelen Gill is working to carve out a role for the Buckeyes. (Birm/Lettermen Row)

“I thought Jaelen had one of his better weeks of practice [before the Rutgers game],” Buckeyes coach Ryan Day said in November. “Then, lo and behold, he makes a big run. There you go. That’s typically how it works.

That run to cap off the win over the Scarlet Knights certainly caught the attention of the Buckeyes, and it was an encouraging sign that Gill was ready when his number was called. Obviously doing that against Rutgers in the fourth quarter of a beatdown is different than handling a key role against Penn State or Michigan, but that’s all part of the growth process and learning curve — and the conversation about Gill might be quite different if he hadn’t put that effort on film.

When it comes to his position, there’s not much incentive for Ohio State to move him away from the offensive side of the ball. The Buckeyes are in better shape in the defensive secondary than they tend to get credit for right now, and that wouldn’t make a ton of sense to force Gill to start from scratch after two years of trying to become a weapon for Ryan Day’s attack. And while a debate could be had about the merits of letting him take a shot at tailback given some uncertainty there this spring, Brian Hartline has a lot invested in Gill and isn’t done trying to mold him at wide receiver while potentially finding some H-back work for him to do.

Jaelen Gill clearly hasn’t had the kind of impact he would have envisioned after two years with the Buckeyes. But there’s still time and a path forward from here — starting with this critical offseason.