It’s not just that Smith-Njigba has to navigate around campus and attend college classes. Or that he’s still learning in the middle of his first few weeks in the Ohio State weight room during offseason workouts.

Smith-Njigba, one of the five wide receivers to earn five-star status in the 247sports.com composite rankings, already preparing himself for a dip in production. The incoming freshman had more receiving yards than anyone in Texas 6A football last season. But with the talented quartet of wide receivers Brian Hartline and the Buckeyes have brought into the program in this recruiting cycle, Smith-Njigba might be able to match those stats.

Smith-Njigba doesn’t care about those stats, though. And he’s certainly fine with the idea of adapting.

“You just got to look at the bigger picture,” Smith-Njigba said. “If you want to win, you’ll do whatever it takes to win. We got threats all across the field, so coming in, of course you want to see 15 balls a game. But realistically, it’s not going to happen at any level at any school. That’s really not in my mind. However many balls I have, I’ve just got to make the opportunity and take advantage of that.” 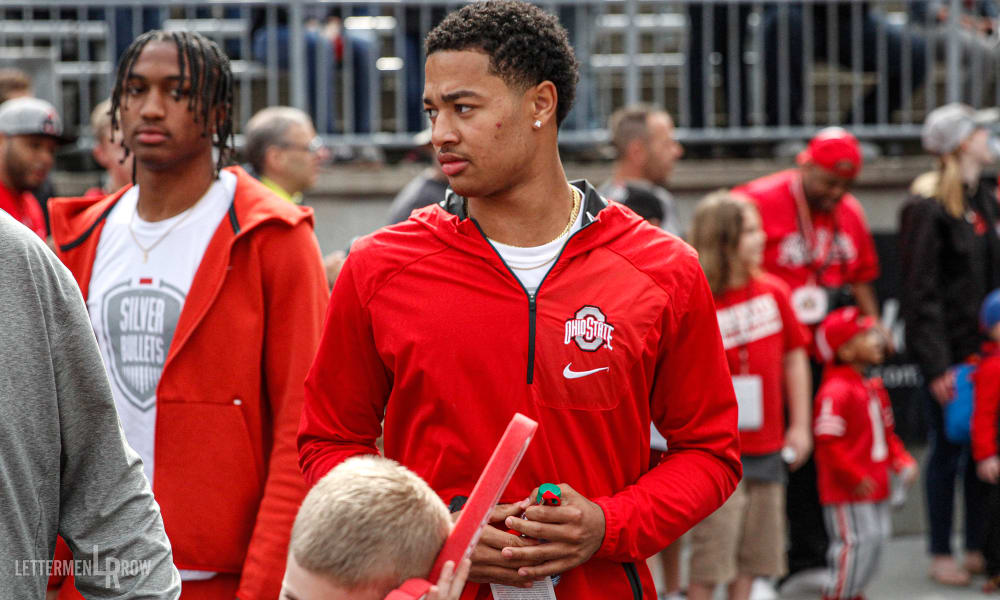 The talk surrounding Smith-Njigba’s incredible high school stat line was whether he was going to earn a fifth star when the final recruiting rankings were released. Smith-Njigba didn’t pay any attention when he finally received that prestigious fifth star, especially because he was already on campus by that point. He had already enrolled and began the de-recruitment.

Once he began workouts at Ohio State, the recruiting stars and high school stat lines are forgotten.

“It’s not that important to me, honestly,” he said of his five-star ranking. “I would say it’s more for the fans or whatever, and for the media, but you know, once you get here and once you step foot, no one matters. It’s all about me putting my head down and continuing to work hard, and that’s what I’m doing right now.”

It’s true. The high school stats don’t matter at Ohio State. But they certainly show the potential of not just Smith-Njigba, but the entire incoming wide receiver class, which is being heralded as the best receiver haul in program history.

I hope so, yeah,” Ohio State coach Ryan Day said when asked his Smith-Njigba’s high school dominance can translate to college success. “It’s exciting when you see stuff like that, when you just see the numbers, over 200 yards receiving a game, one-handed catches, releases where guys fall down on the ground. Yeah, that gets exciting.”

Smith-Njigba is beginning to show signs at Ohio State, and it’s only been a few weeks. He and the other receivers are working out on their own, running routes and catching passes, doing whatever they can to build chemistry with every quarterback on the roster.

In his limited time, he has established himself. Fellow wide receiver Mookie Cooper claimed Smith-Njigba has the best hands he has seen. Others have applauded his work ethic in the early portion of his career. Smith-Njigba is just grinding.

He might not catch as many passes, but that’s not an issue. Smith-Njigba is adapting.