When they first met, Okudah didn’t know exactly what the new co-defensive coordinator could teach him about playing cornerback. He didn’t doubt his knowledge, but he wanted to be sure.

All it took was the first time in front of a projector screen and an hour. Okudah knew what Hafley could do for not only the third-year corner from Texas, but also the entire Buckeyes secondary.

“The first thing we did was watch all my targets from last year,” Okudah said. “He gave feedback after every single rep. After listening to him for that one-hour session, it was like: ‘OK, he knows what he’s talking about.’

“And then, I listened to what he had to say, like his plan for getting me better. After that, I just bought in.”

Buying into what Hafley, who coached the San Francisco 49ers last year, has been teaching has vaulted Okudah to the top of NFL draft boards and All-America lists this season. He has become a true lock-down cornerback.

Okudah is the catalyst for the resurgence in the secondary this year. He is becoming a complete cornerback under the tutelage of Hafley. That relationship has been molded, and it all started with a meeting and one film session. Since then, Okudah seems to have found another gear.

And he’ll have plenty of time to watch even more film with Hafley this week during the Buckeyes second off week of the season.

No, the Buckeyes aren’t going back to the “Three Up, Three Forward” lists they used during the first off week before the Northwestern game. They just did that a couple weeks ago. In lieu of that, Okudah and the cornerbacks are going back to the drawing board, focusing in on perfecting the fundamentals once again.

“We want to just polish up our fundamentals,” Okudah said. “Over the course of the season, things kind of just slip away from you, so just fine-tuning all those little things and put that in the bank moving forward.” 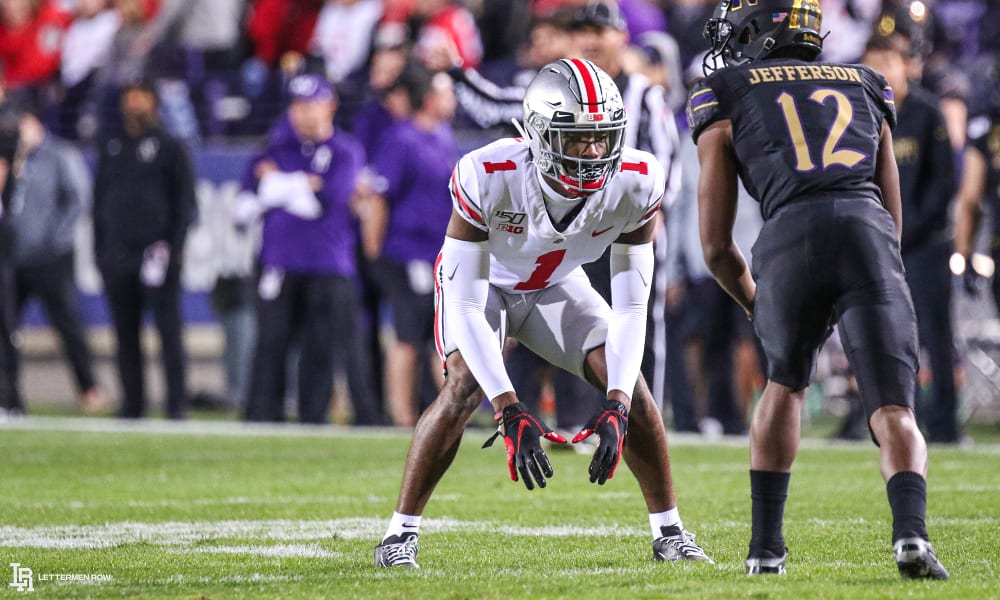 Jeff Okudah is having a big year for the Buckeyes. (Birm/Lettermen Row)

Polishing the basics should be a scary idea for the four quarterbacks remaining on Ohio State’s regular-season schedule. Through eight games, Ohio State is currently No. 1 in the country in passing yards allowed. Okudah has three of the 10 interceptions for the Buckeyes, which is just four off the national lead. The secondary is helping one of the best defenses in America shut every opponent on the schedule down.

What Okudah is doing for the defense is hard to ignore.

“I don’t think there’s one thing that he brings other than that he’s so well-rounded, he helps us day in and day out in a lot of areas,” Ohio State coach Ryan Day said. “First off, he’s a tremendous player. But he takes his job very, very serious, and this is another guy in his third year who’s matured to a level where, I mean, a lot of guys on our team look up to him and the way he approaches day in and day out.

“He’s playing at a high level, he’s playing with great energy. Just seeing the way he was running to the ball after watching the film and throwing his body in there after last week goes to show you his buy-in, and I think he’s playing at a tremendous level.”

That’s not to say Damon Arnette isn’t playing well for the Buckeyes, too. Arnette was the scapegoat for a secondary last season that never seemed to pull everything together, along with the rest of the defense. But with Okudah on one side, Chase Young applying the pressure to the quarterback and Arnette on the other receiver, it’s hard to throw the ball against the Silver Bullets this season.

Jeff Okudah is playing some of the best football of his career, just in time for a November and December dash for the College Football Playoff.

He has made sure the defense is up to a certain standard this season, and it all started with a simple hour-long film study with Jeff Hafley.