Ohio State: J.K. Dobbins gearing up to be 'The Back' for Buckeyes

The speculation, debate and conversations about Ohio State never end, and Lettermen Row is always ready to dive into the discussions. All week long, senior writer Austin Ward will field topics on Ryan Day and the Buckeyes submitted by readers and break down anything that’s on the minds of the Best Damn Fans in the Land. Have a question that needs to be tackled, like the one today about J.K. Dobbins? Send it in right here — and check back daily for the answers.

Are ryan days comments about speaking with JK Dobbins about his role leading to a possible mainly one running back system?

There will be no debates about which tailback deserves more carries at Ohio State. There won’t be any alternating series of snaps. And there is no conversation about the merits of staying fresh versus finding a rhythm.

The Buckeyes are obviously months away from putting together a real game plan, but they only needed one practice in spring before making it quite clear that the running back position finally, definitively belongs to one guy: J.K. Dobbins.

“He’s The Back now,” Ohio State coach Ryan Day said on Wednesday. ” … His carries are going to be up, and he’s going to be the lead dog.”

There were times when limiting those attempts and sharing the load between Dobbins and Mike Weber worked nicely for the Buckeyes, but it didn’t happen consistently enough to be considered a true success for the ground game. And it may have also come at the cost of getting Dobbins into a mindset that actually held him back, as he tried too hard to press the issue knowing that he wasn’t going to have as many opportunities to carry the football. 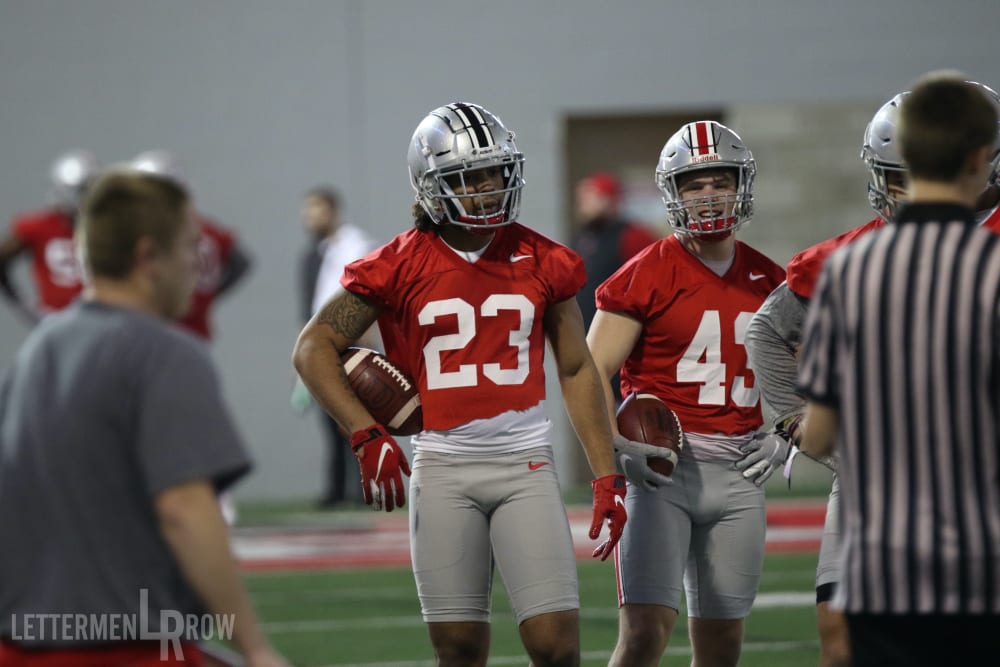 The offense as a whole was just fine. But the productivity from Dobbins wasn’t what he expects himself as his average per carry dropped nearly three full yards from his freshman to sophomore season. Given both his high upside and some relative inexperience behind him as Master Teague, Demario McCall and Marcus Crowley fight for a backup role, the Buckeyes are going into spring ball fully expecting to build the ground attack around Dobbins.

“Last year I kind of got away from that, and I’m not going to make any excuses,” Dobbins said. “It was me. I regressed last year. I didn’t have the year that I needed to have.

“So, I put that on myself, and I’ll get back to that this coming year.”

Dobbins has obviously already embraced that role, and he should personally benefit from the chance to be the primary rusher.

What does that mean for the guys behind him? There won’t be all that many touches to go around, particularly if Justin Fields wins the quarterback job and adds the possibility of a rushing threat at that position again. All three of those guys competing for the backup spot behind Dobbins have ability, there’s no question about that. And at least for true tailbacks like Teague and Crowley, they will have a chance to ascend into that top role once Dobbins moves on — which he’s already widely expected to do after his junior year.

For now, though, he needs to get ready for a heavy workload. This season will belong to J.K. Dobbins in the Ohio State backfield.