COLUMBUS — Johnnie Dixon has a knack for showing up where heâ€™s least expected.

In a seam of an opposing secondary as he streaks away for an Ohio State touchdown.

Basically anywhere on campus with the Buckeyes now qualifies heading into a fifth season with the program that never would have been anticipated him being around this long when he arrived.

Wandering around downtown Columbus or in a random park with his Canon Rebel T6 camera out snappingÂ gorgeous photos.

Finding a moment during training camp to squeeze in some Fortnite isnâ€™t all that unusual these days. But there might not be a lot of wide receivers turning off the gaming systems to unwind by doing some sketching.

Then thereâ€™s the bowling alley. 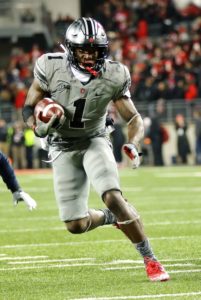 On a Friday night in July, the redshirt senior could have been anywhere. He had just wrapped up another grueling week of offseason workouts, including a team run that had left Dixon exhausted. But he strolled into High Performance Lanes, pulled out some black shoes, shined up his scarlet-and-gray ball and settled in for a couple more hours with yet another hobby.

â€œOnce my day is over, I like to find something to debrief a little bit,â€ Dixon said. â€œComing out here, you know, I have to have a little fun doing something I love doing besides football.â€

Thatâ€™s something of a long list for Dixon, who also still makes it a priority to find time to be a dedicated boyfriend, loyal family member and sounding board as an Ohio State captain for anybody who needs to talk.

Heâ€™s also been known to catch a few touchdowns. And out of all those passions, the receiving gig might have been the one that was in the most jeopardy of being cut from his rotation not too long ago.

Thatâ€™s just one reason why trying to pin down Dixon with a single label can be as difficult as trying to track him down on the way to the end zone.

‘He defines himself as being more than an athlete’ 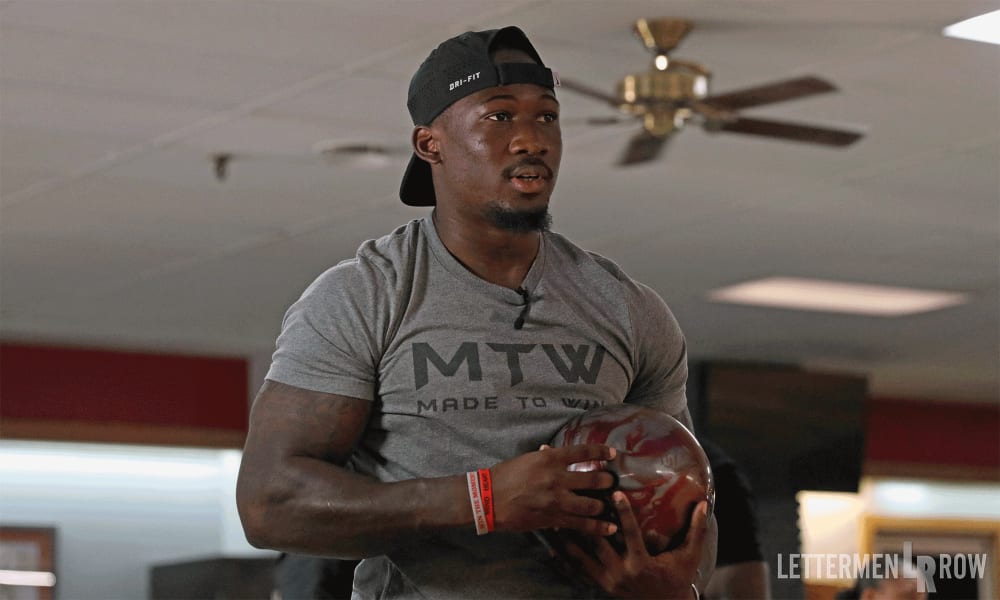 Johnnie Dixon has a personal best of 249 as a bowler. (Birm/Lettermen Row)

Johnnie Dixon is at home on the lanes.

Heâ€™s been bowling for years, with both of his parents bringing him along at an early age and giving him perhaps the first of many hobbies. Heâ€™s never taken any official lessons, but heâ€™s proud of the 249 high score heâ€™s posted and fiercely competitive against anybody — whether itâ€™s his buddy Austin Mack or a journalist tagging along for the night.

So, when he trades his Nike cleats for the all-black Strike Forces, he means business.

â€œI actually think these are ugly as s—,â€ Dixon jokes before heading to the pro shop to check about getting his other bowling ball repaired.

Maybe the shoes arenâ€™t that stylish, but Dixon still finds a way to look good on the alleys. Heâ€™s smooth and unmistakably athletic. The rhythmic footwork looks the same every time, befitting somebody who counts steps and runs routes just about every day of his life. But the delivery is just a bit off early in the evening, and Dixon eventually starts sneaking in extra reps on a different lane to get his game back in order.

Mack cracks a few jokes at his expense along with fellow Buckeyes Binjimen Victor and Malik Harrison. But Dixon always gets the last laugh, his quick wit and personality never slowing down even after a rare gutter ball.

â€œI mean, this is fun, man,â€ Mack said. â€œItâ€™s something that we can just do thatâ€™s not getting in trouble, not trying to be on the streets or playing video games all the time. We come out here and socialize and be competitive.

â€œEven with our schedules, you find your time. When Johnnie has a little extra time and no homework or anything, get in a couple games of bowling or do some photography, enjoy some nature. You really can see a person and their passions that way. Itâ€™s awesome, because he isnâ€™t defined just by being a student-athlete. He defines himself as being more than an athlete. I love how he puts his image out there as being that person.â€

Those outside interests might be one reason Dixon could at least consider what life would be like without football at all.

‘He’ll be one of the coolest grandpas’ 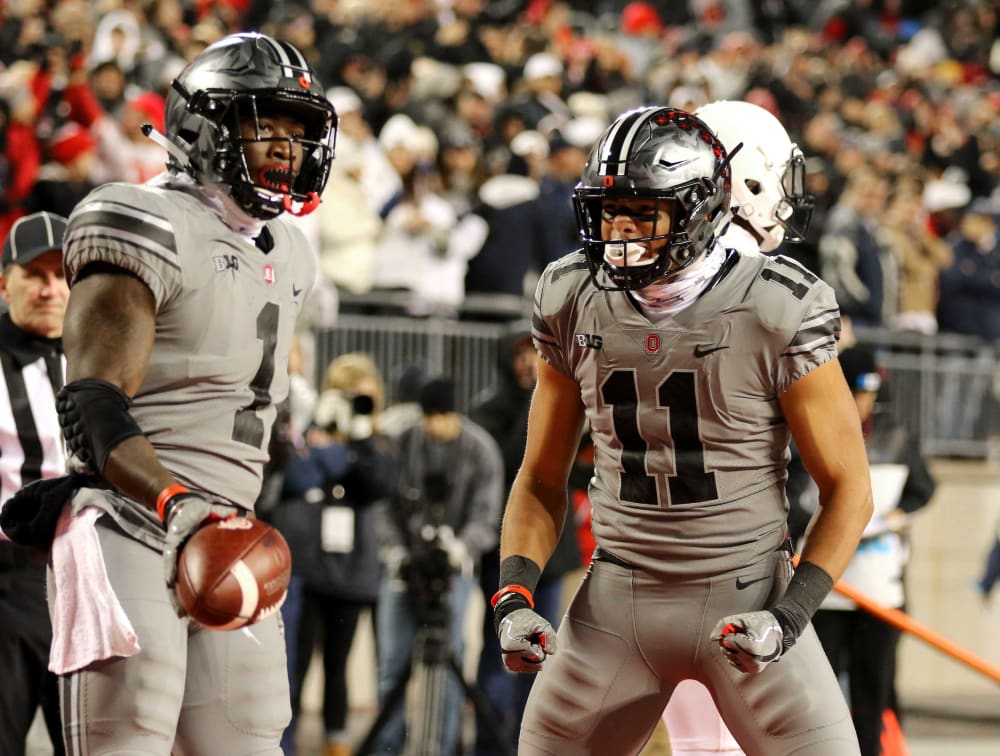 Brian Hartline showed up just to help out his alma mater prepare for the College Football Playoff.

The former Ohio State and NFL wide receiver wasnâ€™t looking to become a mentor, didnâ€™t have any plans to build a new relationship and at that time didnâ€™t have designs on soon becoming a coach. 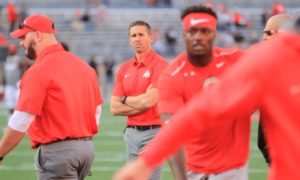 But there was something that just wasnâ€™t right with Dixon in those postseason practices in 2016 leading up to the Fiesta Bowl, and Hartline wanted to know more.

â€œI felt like he was just a man in need,â€ Hartline said earlier this summer. â€œHe had a lot of ability, but the conversations were maybe just not right. But either way, I was just intrigued. Was there an issue? Whatâ€™s up? I just wanted to get to know him. And he was kind of at this turning point of whether or not he wanted to keep playing football and if he still loved it.

Training room to get worked on after dealing with the tendonitis that had long plagued Dixonâ€™s career? Hartline was there.

Question about a route? Just ask. Text message? Hartline was on standby. 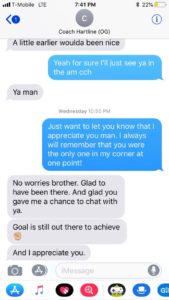 â€œI donâ€™t think Iâ€™ve ever told this story to anybody,â€ Dixon said. â€œBut when Hartline came in when we were playing Clemson and some old guys came back to practice a bit, that was a guy who was in my corner big time once that season was over with. I really didnâ€™t know what I was going to do.

â€œHe had my back for whatever and he fought for me. Hart was like: I donâ€™t care what anybody says, I see you for who you are right now. He helped build me back up. I tell him all the time and I send him a message every now and then like: I really appreciate you.â€

Those messages still go out, and the relationship has only become stronger over time.

Now, of course, the dynamic has changed with Hartline taking over as the interim wide receivers coach and Dixon one of the leaders of his position unit. And thanks to those fateful practices nearly two years ago and Dixonâ€™s decision to put off either retirement or an attempt at the NFL, the two confidants get an unlikely season to try to throw some strikes together.

His Ohio State story, though, isnâ€™t done yet. 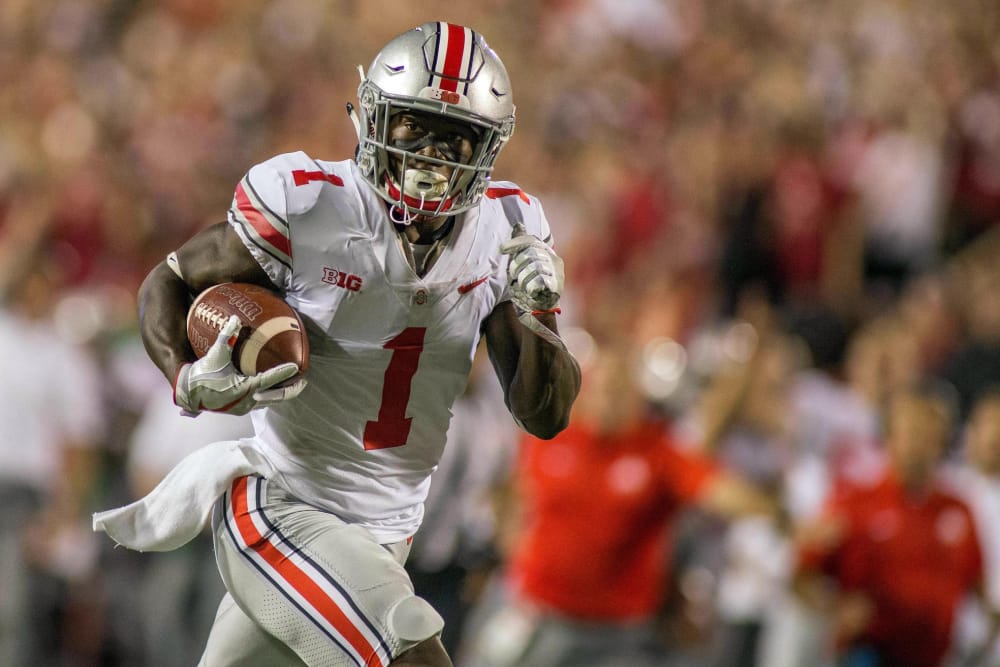 The sky was the limit when Johnnie Dixon enrolled early and immediately started turning heads during spring practice in 2014.

Back then, there would have never been even a remote consideration that he would be gearing up to help the Buckeyes as a fifth-year wideout. But his knees just wouldnâ€™t let him do what he knew he was capable of for Ohio State.

â€œIt was never like a tear or anything,â€ Dixon said. â€œIt was tendonitis, and it just kept bothering me. Some days would be really good, and others it would be so hard to run and cut and break down. I could have a really, really good day, and then the next it might go blank and I would be invisible.â€

The flashes of his potential could be dazzling. They validated why Ohio State recruited him so heavily out of West Palm Beach, Fla., but they were also frustrating since they were usually limited to the practice field. 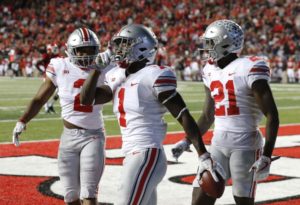 Dixon came into last season with just seven career receptions and in danger of becoming an afterthought for the unit. By the end of the year, heâ€™d finish with eight touchdown grabs and an example of the value of perseverance that Ohio State might never stop recounting.

â€œFor me personally, it meant everything,â€ fellow wide receiver and close confidant Parris Campbell said. â€œWe had those conversations, we talked about it and how close he was to just letting it all go. It would have been heartbreaking, because he wouldnâ€™t have had that season last year and who knows what he would have been doing.

â€œIt meant a lot to me. Honestly, it gave me chills every time he crossed the end zone. He got his passion back, he got his love for the game back and it was so great to see it.â€

Passion rarely seems to be an issue for Dixon, because thereâ€™s clearly a deep supply.

And once itâ€™s channeled in the right direction, thereâ€™s seemingly no limit to what Dixon can accomplish — or how many different ways he might try to do it.

â€œHey, I was one foot out the door,â€ Dixon said. â€œBut where I come from and in my family, thatâ€™s been instilled in me to never give up. Always fight. I feel like if I had given up, then Iâ€™m basically telling people that itâ€™s easy and you should do the same thing and give up. I just wanted to be a shining light for the kids coming up behind me.

â€œTo do what I did last year, itâ€™s huge for me to do what I know I can do. And the biggest thing for me is leaving a legacy for the guys behind me. I mean, I wasnâ€™t even supposed to be in this position this year.â€

For Johnnie Dixon, arriving where heâ€™s not expected and making the most of it when shows up is just a way of life. 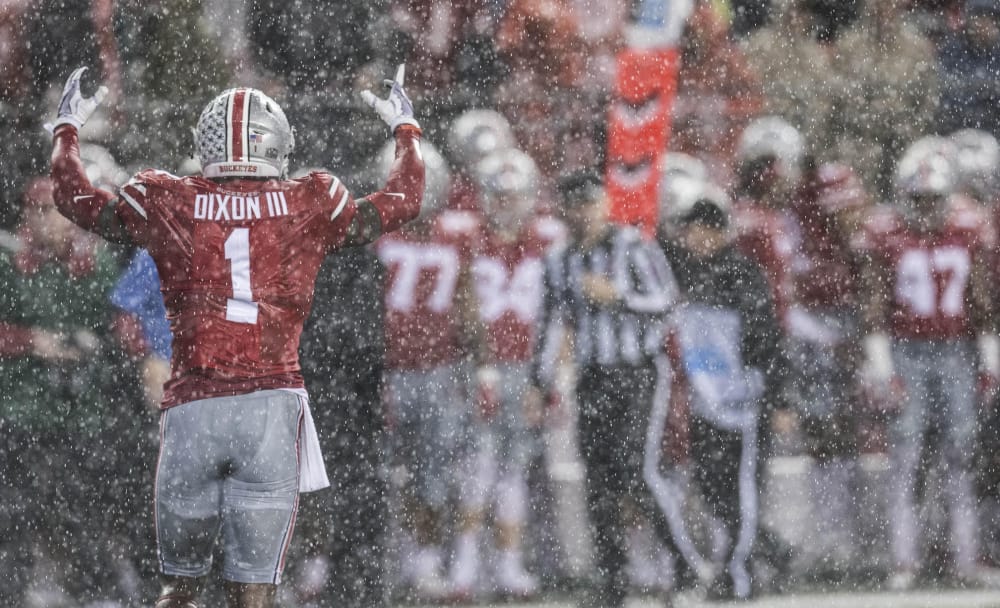