INDIANAPOLIS â€” Jonah Jackson may have led Ohio State for the most knockdowns along the offensive line last season. But it wasn’t by much.

The fifth-year senior who took a graduate transfer from Rutgers to Ohio State made his presence known on the interior of the offensive line that was a finalist for the Joe Moore Award. He paced the five linemen with 79 credited knockdowns — formerly known as pancake blocks — but returning Buckeyes guard Wyatt Davis wasn’t too far behind Jackson.

And while Jackson graduated onto the NFL, Davis decided to return to the program for a third season. Both could potentially be first-round picks if everything works out as planned. And the Buckeyes could see the pipeline of interior offensive lineman to the league continue to grow.

“They might have short-changed me a little bit,” Jackson said of his knockdowns number. “I donâ€™t think they counted the Clemson ones. Yeah, I was proud with the 79. He was right there with me. He had a couple more that looked more impressive that they called for him, so I was a little jealous.â€

Jackson, along with Davis and center Josh Myers, were the three-headed monster from that dominant offensive line, which paved the way for the first individual 2,000-yard rushing season in program history. Jackson is certainly going to be selected with a premium pick in the Draft; Davis and Myers figure to be right behind him next season, assuming they turn pro as projected.

It’s part of an already impressive collection of talent that has came and gone through the doors of the Woody Hayes Athletic Center. So what the Buckeyes didn’t win that Joe Moore Award last season? They still had one of the best lines in the country. Although Jackson is gone now, he’s confident the line play won’t see too much of a dip without him.

â€œHonestly, it might be better,” Jackson said. “It might be better than it was last year, because the guys that are coming in were just as good and ready to play in case me and Branden [Bowen] or somebody else was to go down, so Iâ€™m definitely excited for whatâ€™s going on over there.â€

Davis will be a key piece of that offensive line puzzle for next season. As a first-year starter last season, Davis impressed. So did Jackson. Both were praised as road-graters who are athletic enough to do whatever is needed in both run blocking and pass protection. 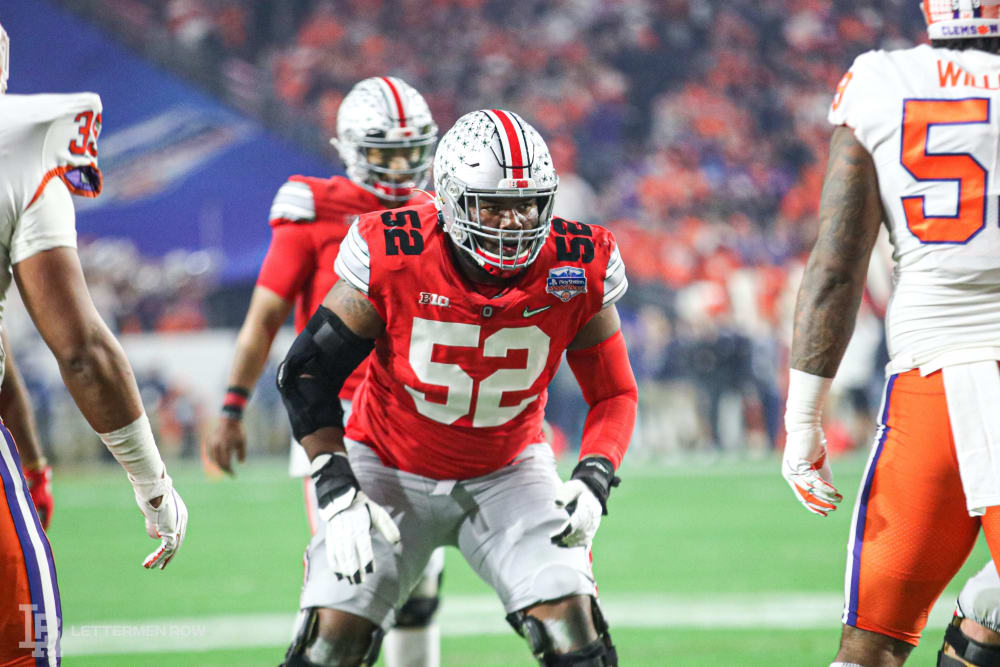 Wyatt Davis can be one of the best guards in the country next season. (Birm/Lettermen Row)

That’s part of what makes them so good. The athleticism jumps out, especially when Ohio State ran its outside-zone running plays that forced Jackson and Davis to reach outside and run the field.

So while Jackson is preparing to wow everyone at the NFL Combine and make an ascent up draft boards across the league, Davis is getting ready for another run at a national title. Both could wind up as the next great guards to come out of Ohio State.

â€œMan, heâ€™s special,” Jackson said of Davis. “Heâ€™s definitely explosive. Heâ€™s another ferocious competitor. That guy, heâ€™ll finish to the echo of the whistle. He kind of got me jealous a couple times because his knockdowns looked better than mine. Heâ€™s a great player. Heâ€™s a great player and a great dude.â€