Stage set for Josh Proctor to show Ohio State what he can do
Article written by:

The speculation, debate and conversations about Ohio State never end, and Lettermen Row is always ready to dive into the discussions. All week long, senior writer Austin Ward will field topics on the Buckeyes submitted by readers and break down anything that’s on the minds of the Best Damn Fans in the Land. Have a question that needs to be tackled, like the one today on Josh Proctor? Send it in right here — and check back daily for the answers.

Can Josh Proctor come in and push for early playing time?

There is almost no doubt at all that there will be a push coming from Josh Proctor in a week when training camp at Ohio State opens for business. From his reputation on the field, his undeniable athleticism and the fact that the Buckeyes have a need for a new starter at safety, everything points to Proctor having some sort of impact right away in the secondary. After all, the coaching staff didn’t go try to pry the first recruit out of Oklahoma in program history just for fun.

But what are the chances that Proctor can turn his role as a freshman into a starting job? He’s not going to head into August as the odds-on favorite, but he’s certainly an intriguing dark-horse pick thanks to his maturity and the fact that none of the other contenders definitively claimed the spot in the spring.

It’s difficult right now to nail down specific odds on Proctor actually finishing on top of the depth chart by the time Sept. 1 rolls around, simply because his next rep on the practice field for the Buckeyes will be his first. It’s possible there could be a completely different conversation about Proctor if he had enrolled early and gained some experience with the Buckeyes in March and April, but there’s obviously nothing wrong with playing basketball and enjoying the final spring semester in high school before moving on to college. 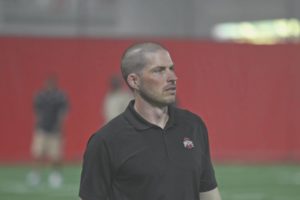 That choice, though, compresses the time available for Proctor to acclimate to the intense way Ohio State practices, to learn the playbook and to try to catch Isaiah Pryor or Jahsen Wint in the battle for playing time.

That challenge certainly won’t phase somebody with Proctor’s mindset, and having spent time around him, his family and coaches earlier this year in Owasso, this is exactly the kind of opportunity he embraces. Of course, Pryor and Wint aren’t afraid of competition either, which will make the open safety spot opposite Jordan Fuller one of the most intriguing, important positions to watch for the Buckeyes next month.

One way or another, Proctor is going to play this season for the Buckeyes. In a week, they’re about to start finding out exactly how much.