The speculation, debate and conversations about Ohio State never end, and Lettermen Row is always ready to dive into the discussions. All week long, senior writer Austin Ward will field topics about the Buckeyes submitted by readers and break down anything that’s on the minds of the Best Damn Fans in the Land. Have a question that needs to be tackled, like the one today about Ohio State and Josh Proctor? Send it in right here — and check back daily for the answers.

If you were Ryan Day and you could pick one non-starter from last season to really maximize their development and pop as a starter next season, who would it be and why?

The most pressing concern was always likely to be in the Ohio State secondary.

But it’s probably not at the spot that has generated the most offseason debate.

Jordan Fuller doesn’t have the same kind of first-round draft stock as the two cornerbacks the Buckeyes are trying to replace, which might be part of the reason why the safety role hasn’t come up that often. And it’s also probably influenced by the fact that Josh Proctor has spent his two seasons in the program drawing rave reviews for his athleticism, play-making ability in practice and a taste of experience that might ease his transition into the lineup.

But Proctor has never been a starter. He wasn’t going to be fully healthy for what turned out to be an abbreviated spring camp. And while his game-changing skills have been on display several times already, it’s also true that he hasn’t yet become the kind of consistent security blanket that made Fuller so integral to the success of the Silver Bullets overall.

That doesn’t happen overnight, of course. But heading into his junior year, this is the time where Proctor should be making the leap — and it just so happens to match up with an offseason where safety could be the single biggest need on the roster.

“I would say at safety, definitely Josh Proctor,” Fuller said last month about his potential replacement. “Marcus Hooker, and then my boy Bryson Shaw is definitely going to turn some heads. Really, there’s so much talent in the room that I can’t quantify it. 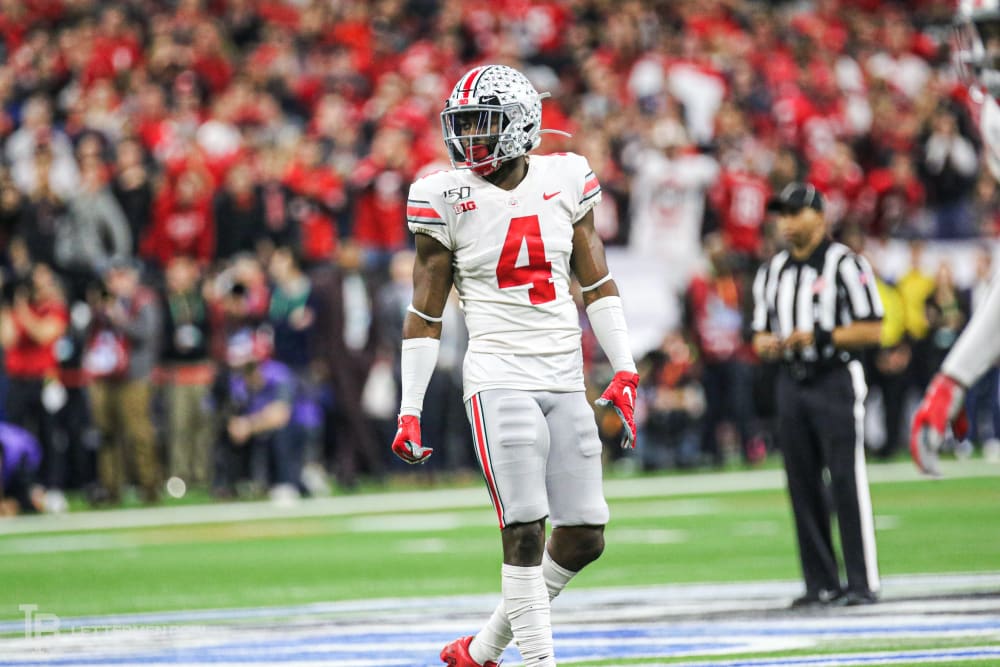 Jordan Fuller leaves a hole that must be replaced by Ohio State at safety. (Birm/Lettermen Row)

“But I would say whoever is able to lock in the most with their job and sacrifice the most for the team is going to make the biggest impact.”

There has never been any doubts about Proctor’s ability to leave a mark with the Buckeyes, and his name was consistently coming up during training camp last August as a ball-hawking weapon who could push Fuller for playing time. But as Ohio State shifted to more of a single-high safety look and with Proctor dealing with what was believed to be a nagging shoulder injury, the leap into the lineup didn’t happen quite as envisioned.

By late in the season, Proctor was on the field to deliver a bone-rattling hit to clinch the Big Ten title. And in the Fiesta Bowl, the Buckeyes trusted him enough to have him in a high-stakes game in key moments, though obviously a couple of those plays will go down as lessons and motivation in the development project.

Perhaps if Ohio State gets the spring workouts back in the summer and Proctor gets an expected clean bill of health, that format could work in his favor. He was clearly engaged with mental reps during the only practice this month that was open to the media, and that certainly suggested he knows that he has to do everything he can to take on a position of undeniable importance to the Buckeyes. Getting to potentially participate without limitation while easing into training camp might be a much better way for him to build momentum and confidence as a front-line starter.

Yes, Ohio State is losing a generational superstar at defensive end in Chase Young — but the cupboards are fully stocked for the Rushmen. The Buckeyes must replace the only 2,000-yard rusher in school history, but Trey Sermon’s transfer and the likelihood of Marcus Crowley being healthy by training camp should help to replace J.K. Dobbins. And even at cornerback, Ohio State still has Shaun Wade and a couple other guys who got meaningful reps last season behind Jeff Okudah and Damon Arnette waiting in the wings.

The situation at safety isn’t quite the same, and that’s what makes the rise of Proctor so critical for the Buckeyes now that Fuller is gone.

Josh Proctor isn’t the only option at safety, of course. But he’s got the greatest upside, and Ohio State needs him to tap into it.