CATAWISSA, Pa. — The country’s top-ranked 2020 wide receiver prospect has made his college decision: Julian Fleming is coming to Ohio State.

Fleming, Pennsylvania’s top-ranked player, chose the Buckeyes over Penn State, Clemson and Alabama, ending his recruitment and sending shockwaves that are sure to reverberate throughout the landscape of college football and the Big Ten.

No Urban Meyer? No problem for Ryan Day and Brian Hartline. Ohio State is still a force to be reckoned with on the recruiting trail.

Fleming’s announcement came much earlier than anyone expected, but the fact that he chose the Buckeyes isn’t something that should surprise many. He’s contended for months that his best relationships were with Day and Hartline, the two coaches at Ohio State who have spent the most time recruiting him for the program.

“It was important just to get the stress off of my family and off of my shoulders,” Fleming told Lettermen Row. “I fell in love with Ohio State, and I just finally realized I was ready to be over all of this recruiting stuff.”

But it wasn’t just the tight-knit nature of the bond Fleming has formed in Columbus, it was about the chance to be developed into the best receiver he can be. He has believed Hartline is the coach capable of that since his first visit to Ohio State.

“All the stuff [Hartline] expects from you, he can show you himself,” Fleming said. “I think thatâ€™s one of the most important things from a development standpoint.â€

The Buckeyes have been the choice for a while, according to the 6-foot-2, 210-pound receiver. He told Lettermen Row in early May that he had informed the program of his decision in March, but that he wanted a little more time to make official visits, something he wanted to do to provide his family a chance to experience new places. He only took one to Alabama before deciding the announce his commitment, which was originally slated for June 21 before deciding to make it public nearly three weeks early.

Fleming’s announcement gives the Buckeyes nine commitments in the Class of 2020 and pushes Ohio State ahead of Penn State once again for the Big Ten’s best class in this cycle. He’s the second 5-star prospect to verbal to the Buckeyes, joining offensive tackle Paris Johnson. The addition of Fleming sets up Hartline with one of the country’s premier wide receiver hauls, putting him alongside the country’s No. 14-ranked receiver (Gee Scott, Jr.) and No. 30-ranked receiver, Jaxon Smith-Njigba. 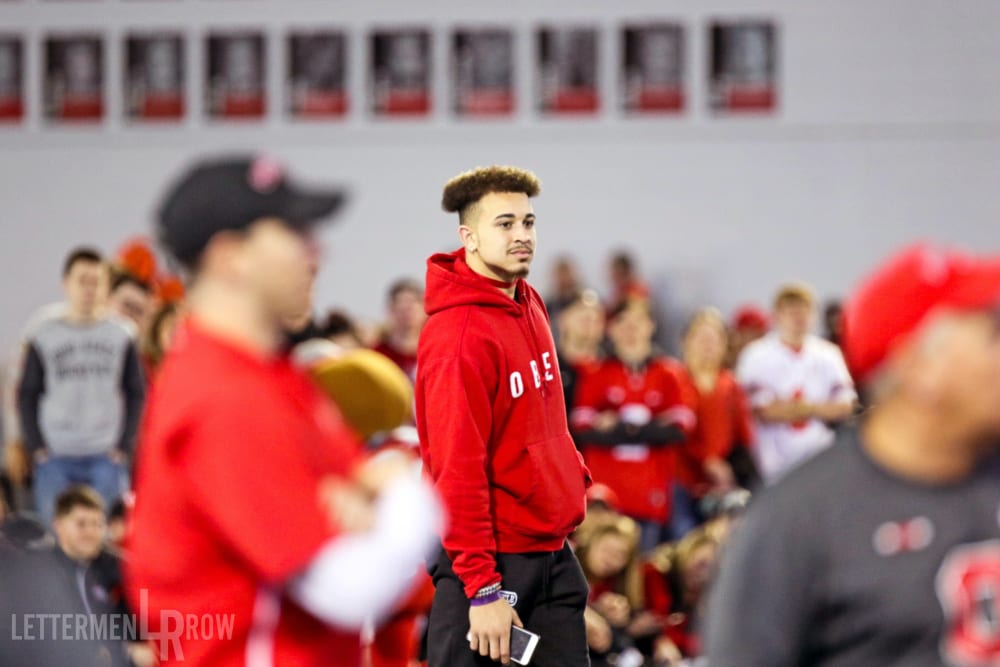 Julian Fleming said he felt “at home” with the Buckeyes following a March visit. (Birm/Lettermen Row)