COLUMBUS — This was always the plan for Justin Fields and Ohio State.

Fields accomplished almost everything with the Buckeyes that was projected. And while coming up short of the Heisman Trophy or a national championship weighed on his mind as the junior prepared graphics for both a potential return and to turn pro, eventually the anticipated departure won out on Monday.

“Justin has been unbelievable,” Ohio State coach Ryan Day said after the national championship. “He’s as competitively tough a player as I’ve been around. For him to go out there and play today really shows his toughness and how much he loves his brothers; he still took some shots on that hip. He was not 100 percent [against Alabama]. He was working through it and made some really good throws, made some gutsy plays, kept us in the game there for a while.

“He’s an unbelievable player, and I’m going to miss him.”

The Buckeyes were obviously prepared for the exit of Justin Fields, and they certainly understand why the timing is right for him to move on. But the decision does create a ton of intrigue for Ohio State moving forward at the most important position on the roster, and Lettermen Row is breaking down what it could mean. 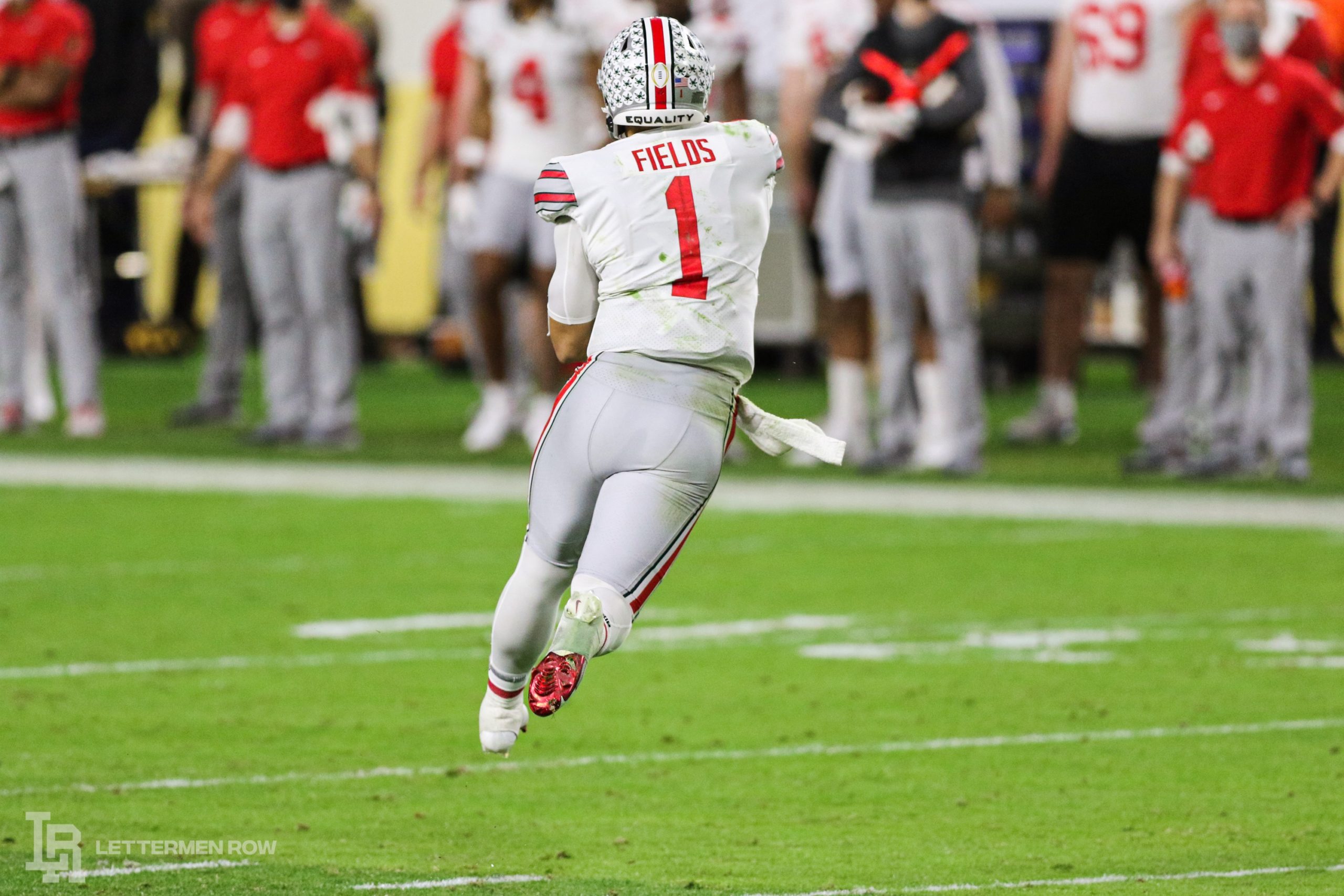 Ohio State quarterback Justin Fields was a superstar for the Buckeyes. (Birm/Lettermen Row)

The highest-rated quarterback to ever join the program more than lived up to the advance billing. Justin Fields didn’t win the Heisman Trophy or claim a national championship, but he’ll leave Ohio State with a strong case as the best passer to ever put on the Scarlet and Gray. His two-years were filled with dazzling displays of athleticism, off-the-charts productivity, a couple Big Ten titles and a handful of unforgettable moments fueled by legendary toughness. Fields was quite simply a superstar for the Buckeyes, and he backed up every bit of the hype.

Off the turf, Fields also proved to be an invaluable leader, taking up the mantle as the face of the program to fight for the reinstatement of the football season after it was cancelled in August. As a captain and the leader of the offense, Fields was indispensable for the Buckeyes — and he should go down as the most talented quarterback they’ve ever had.

Options to take over at quarterback for Buckeyes

Ohio State has three touted prospects waiting in the wings, and a truly fascinating competition is set to begin in spring camp with C.J. Stroud and Jack Miller now joined by true freshman Kyle McCord. The Buckeyes have been recruiting at an elite level at the most important position on the field, and talent is certainly not a question. Experience, though, is definitely a concern since nobody in that trio has thrown a pass yet at the college level.

This is yet another delicate dance for Ryan Day as he simultaneously manages the high-profile position and top-shelf talent, because the Buckeyes are likely going to want to add a fourth scholarship passer — potentially through the graduate-transfer market. There could be an element of risk there as well since adding to the competition could make it more difficult to keep all of those passers around for at least another year. Either way, by now Day has more than proven that he knows what he’s doing at the position and that he’ll have somebody ready to lead a championship contender by the fall.

Ohio State just lost a guy with a legitimate claim as the best quarterback in program history. Even if it’s expected, that still stings. Justin Fields is leaving enormous shoes to fill for his replacement, and the standard of excellence at the position has now been raised. Stroud and Miller should have benefitted from spending a year around the captain, watching the way he prepares, practices and works on a daily basis. Assuming they made the most of that time, that should be a helpful head start for them as the battle heats up to replace Fields and take the keys to one of the most explosive attacks in the country.

Bottom line:Â Ohio State anticipated this all along and has been preparing to replace Justin Fields. But that won’t make it any easier now that it actually has to do it.