Ohio State: How much will quarterback run game factor for Buckeyes?
Aritcle written by:

The speculation, debate and conversations about Ohio State never end, and Lettermen Row is always ready to dive into the discussions. All week long, senior writer Austin Ward will field topics on Ryan Day and the Buckeyes submitted by readers and break down anything that’s on the minds of the Best Damn Fans in the Land. Have a question that needs to be tackled, like the one today aboutÂ the quarterbacks running the football? Send it in right here — and check back daily for the answers.

With QB depth lacking for the 2019 Buckeyes, do you expect very few designed runs for Fields this year? He has elite speed, but will the risk of injury outweigh that aspect of his game?

The Ohio State offensive gurus have proven throughout their careers that they will tailor an attack around the strengths of the quarterback, and that’s exactly what they will do again with Justin Fields or Matthew Baldwin. And the fact that the Buckeyes are going into the season relatively inexperienced and currently short of the depth they would ideally like isn’t going to change their approach.

If Fields wins the starting job, his mobility is absolutely going to part of the game plan. But just because he’s more dangerous as a rushing threat than Dwayne Haskins was doesn’t mean Ohio State is going to turn him into Braxton Miller. In general, Ryan Day has worked to shift the Buckeyes away from being overly reliant on the quarterback to run the football, but he’s also not going to leave a potentially dangerous weapon unused. Much of what the power-spread offense and the Run-Pass Options favored by Ohio State rely on is the quarterback making the correct read. So, if a defense wants to try its luck chasing down the speed of Fields or trying to wrap up a guy with a decent spin move, the Buckeyes are going to be just fine with that. And they obviously won’t discourage him from using his feet to extend plays in the pocket and escape a pass rush.

So, maybe the true designed runs like the QB Power that J.T. Barrett executed so brilliantly for years could continue to be fazed out. But that’s probably not due to concern over the depth chart, because the Buckeyes are also quite confident in Baldwin’s ability. 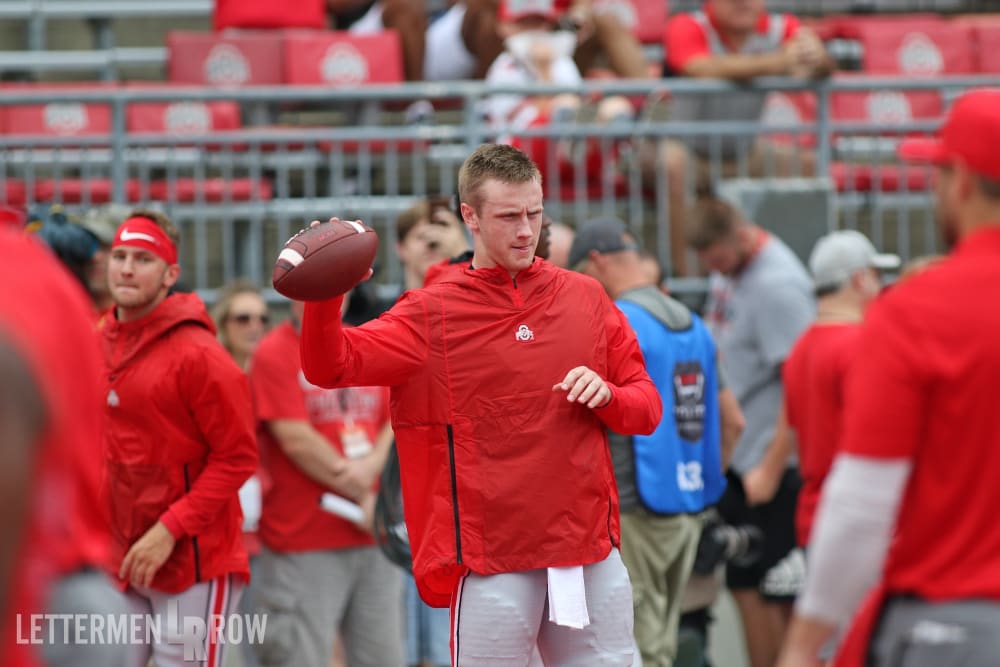 The redshirt freshman from Texas has seemingly been overshadowed by the arrival of Fields, but he’s a viable option to lead Ohio State — and when or if he’s called upon, that would again cut down on the quarterback carries just like with Haskins a year ago.

The key factor for Day is looking at extraordinary talents and working from there. If Ohio State is at its best with the quarterback posing a rushing threat, he’s not going to compromise his play-calling for fear of injury. There is a health risk at any time and on any play, regardless of what is dialed up before the snap. In some respects, Fields’ ability to use his legs could actually be more likely to help him avoid getting hurt rather than causing it, even though it’s obvious that opening any quarterback up to the chance for repeated hits is going to make a coach hold his breath.

Something else to consider with Fields: A number of people around him have indicated that he would much rather use his arm like Haskins than rely on his athleticism. And based on his reputation, his passing ability and Ohio State’s wide array of explosive skill-position players should provide more than enough options to ensure that the quarterback doesn’t need to be a major factor on the ground.

Fields still hasn’t even taken a snap in spring camp yet, so there is a great deal of work ahead as the Buckeyes sort through the ideal approach for this season. But rest assured, the Buckeyes aren’t going to tap the brakes on a quarterback’s wheels if that’s the best way to win games — no matter what the depth chart looks like.