The speculation, debate and conversations about Ohio State never end, and Lettermen Row is always ready to dive into the discussions. All week long, senior writer Austin Ward will field topics about the Buckeyes submitted by readers and break down anything that’s on the minds of the Best Damn Fans in the Land. Have a question that needs to be tackled, like the one today about the Ohio State and quarterback options during the Justin Fields pursuit? Send it in right here — and check back daily for the answers.

What if the pecking order of 2019 skill level is: Haskins,Burrow, Baldwin, Martell, Hoak, Fields. Martell May have won the job through knowledge of playbook had he stayed and competed.

The hypothetical quarterback competitions Ohio State could have had are absolutely fascinating thanks to all the elite arms, dual-threat weapons and high-end recruits that have been through the program over the last couple years. Obviously it would have been impossible for all of those guys to be on the roster at the same time. But comparing them all is certainly interesting, mostly when it comes to evaluating whether the Buckeyes have made the right choices while essentially revamping the entire depth chart.

There is no question that Dwayne Haskins belongs on the top of this most-skilled list. And his emergence into one of the nation’s best passers who had a no-brainer decision to jump to the NFL Draft early was the major domino that really changed everything for Ohio State.Â If Haskins was still around, the Buckeyes simply wouldn’t have landed Justin Fields.

Honestly, the only real debate when it comes to the second spot in the pecking order is how a first-time starter in Fields stacks up against a veteran hand like Joe Burrow. But based on the open portions of training camp this month, the nod here goes to Fields as he starts living up the hype thanks to the physical tools that had him rated as the best overall recruit in the history of the program. 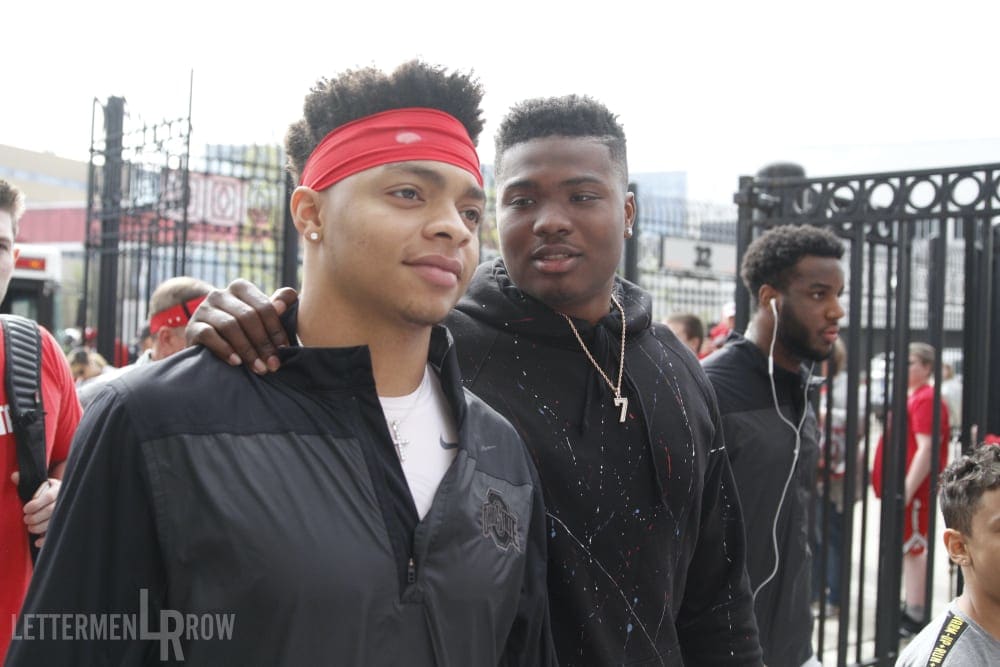 Justin Fields is a worthy successor to Dwayne Haskins at quarterback for Ohio State. (Birm/Lettermen Row)

Burrow does have the advantage when it comes to experience, and if Ohio State had somehow got him to stick around behind Haskins, it would have absolutely been in great shape with him running the offense. LSU got a winner, that’s true. But now that Fields is getting settled into the offense, the upside with his arm strength, accuracy and off-the-charts athleticism is shining for the Buckeyes.

There is absolutely no doubt at all that Fields was worth pursuing regardless of who else it had at quarterback. And that decision has not only been validated by the way he’s playing in practice so far, it was double-stamped when Tate Martell was beat out for the job at Miami and then immediately missed the next practice. That was a direct callback to last year when he was threatening to transfer from Ohio State on hotel checkin day then issued subtle threats to Fields to stay away ahead of the Rose Bowl, a reminder that maturity questions have always swirled around him right along with the doubts about his passing ability.

Out of all of those options, Martell was always the worst fit for the Buckeyes with Ryan Day in charge. And Martell might have had his hands full just holding off Matthew Baldwin for the backup job had he actually competed in spring practice before bolting to join the Hurricanes. In the long run, Baldwin is the guy Ohio State will miss the most after he transferred closer to home at TCU, because it seemed perfectly set up for him to start for the program for a year or two after Fields was done with his career.

It’s still too early to get a really solid feel on what Gunnar Hoak can provide in the backup role for the Buckeyes this season, and Chris Chugunov can’t be completely ruled out there after getting plenty of second-team snaps during practice on Wednesday. But the gap between Fields and those two appears to be significant, and that’s not meant as a knock on them as much as a reminder of just how gifted the five-star, soon-to-be-starter really is.

That obviously doesn’t mean Justin Fields would have edged a returning Heisman Finalist in Dwayne Haskins on this list of quarterbacks who could have been at Ohio State in 2019. That’s a high bar to clear, of course.

But he’s the next-best option for the Buckeyes, and the combination of his diverse set of skills and Day’s play-calling could be special.