The speculation, debate and conversations about Ohio State never end, and Lettermen Row is always ready to dive into the discussions. All week long, senior writer Austin Ward will field topics about the Buckeyes submitted by readers and break down anything that’s on the minds of the Best Damn Fans in the Land. Have a question that needs to be tackled, like the one today about Ohio State and defensive tackles like Kevin Wilson and theÂ coaching staff? Send it in right here — and check back daily for the answers.

Rank the likeliest assistance coaches who we may need to replace after this year (be it for HC jobs, promotions, retirement, other)

Believe it or not, Ohio State might be in line for a bit of continuity on the coaching staff for a change this offseason.

At least until somebody wakes up and snatches Kevin Wilson to rescue a team in need of a lifeline from one of the game’s most innovative offensive coaches and a proven program-builder. Until then, of course, the Buckeyes will be more than happy to keep him around brainstorming ideas with Ryan Day and helping put together far and away the most prolific scoring attack in the Big Ten.

Wilson is increasingly coming up again in offseason coaching searches, and both he and running backs coach Tony Alford were involved with the Colorado State vacancy during the most recent hiring cycle. That spot might have fit Alford slightly better as a Rams alum, but Wilson would have been a home-run hire as well. It’s likely that the way his tenure ended at Indiana continues to give some athletic directors pause, though two outside investigations and Ohio State’s due diligence found no wrongdoing by Wilson there — and the program has had nothing but positive experiences since he arrived.

If that’s the hangup elsewhere, the Buckeyes have reaped the benefits of pairing him with Day. And it will eventually pay off for whatever program eventually pulls the trigger and gives him another shot to run his own organization.

â€œIâ€™d like to have the opportunity to go be a head coach again,” Wilson told Lettermen Row last year after the Rose Bowl. “I donâ€™t know if that opportunity will present itself, and Iâ€™m not chasing it. Iâ€™ve got a sophomore in high school and Iâ€™d like to get him through high school, and we like where weâ€™re at. But I think Iâ€™ve got a few really strong years left, and I just want to keep coaching ball.â€ 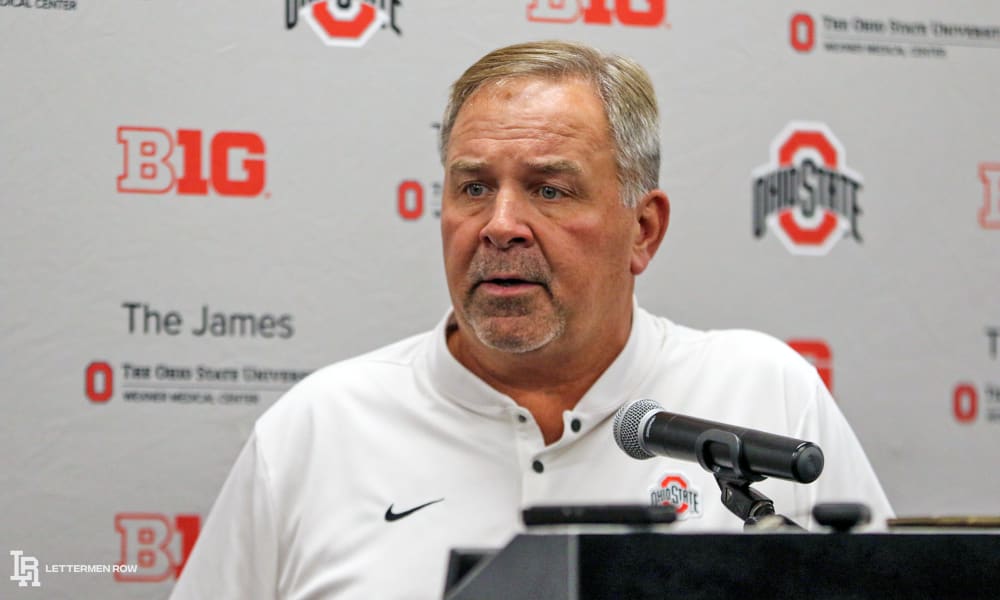 Wilson gave the Buckeyes another productive one after that win in the Rose Bowl, and he’s going to be a key part of the bid to again defend the Big Ten title when football resumes at some point this year. He can also afford to be choosy about his next move since he’s comfortable in Columbus and making more than a million dollars with the Buckeyes, so it’s no certainty that he would simply jump at the next job he’s offered.

But that’s also true for the entire coaching staff right now under Day. Veterans like Larry Johnson and Greg Mattison have expressed little interest in retirement. Alford has been tied to head-coaching vacancies during at least three hiring cycles since he arrived at Ohio State, though his family is also happy in Columbus and he’s got a fully-loaded running backs room for the foreseeable future. Brian Hartline’s stock is soaring as he’s shown what he can do in the coaching profession, but he’s made it clear that he’s quite pleased to be back at his alma mater. Kerry Coombs now has NFL experience on his resumÃ©, which might make him an appealing head-coaching candidate if the right fit pops up — but he just got back to Ohio State and has made his feelings for the school well known. Al Washington is on the rise, Matt Barnes has been an under-the-radar hit and Greg Studrawa has quietly built one of the most offensive lines in the country.

It’s not hard to make a case for almost everybody on the staff as commodities on the coaching market in different capacities, though Corey Dennis is probably the exception for now since he’s just getting started as a full-timer working with quarterbacks. But it’s also not hard to imagine all of them sticking around and giving the Buckeyes some elusive stability. It’s tough to beat what Ohio State has going right now as the athletic department has stepped up its commitment to the salary pool, the program offers a chance to compete at the highest level on an annual basis and the recruiting sales pitch has never been easier to make.

Obviously there will be guys ready to take the next step in their careers at some point. But the most likely candidate right now would actually be returning to the head-coaching ranks, and Kevin Wilson leads the list.