COLUMBUS â€” Kyle McCord is not out of the Ohio State quarterback battle.

As the spring winds down and the Spring Game draws closer, McCord hasn’t been ruled out of the job. He’s still in the middle, fighting with every rep to prove he can be a rare true freshman to lead one of the country’s premier programs.

And with each rep, McCord is gaining experience he’ll need as the quarterback competition is expected to bleed into the fall.

“I just think it’s getting more and more reps and trying to get better with each play,” Ohio State coach Ryan Day said of McCord. “The thing you can’t do is you can’t run at every single play all different coverages every single practice. So what you have to do is you have to be able to play the plays in your mind. Play with an imagination, put the work in off the field. Because if you can solve some of those problems on your own, not just when you walk in the building and when you’re out at practice, you’re going to accelerate your learning.

“I think he’s done a good job of that. I think he can continue to get better at it because that’s a huge part of the game.”

Ohio State had a quarterback who could do those things for two seasons. But Justin Fields is now off to the NFL, and the Buckeyes will need to find a quarterback they can trust. C.J. Stroud and Jack Miller both have been in the program for a full year longer than McCord. 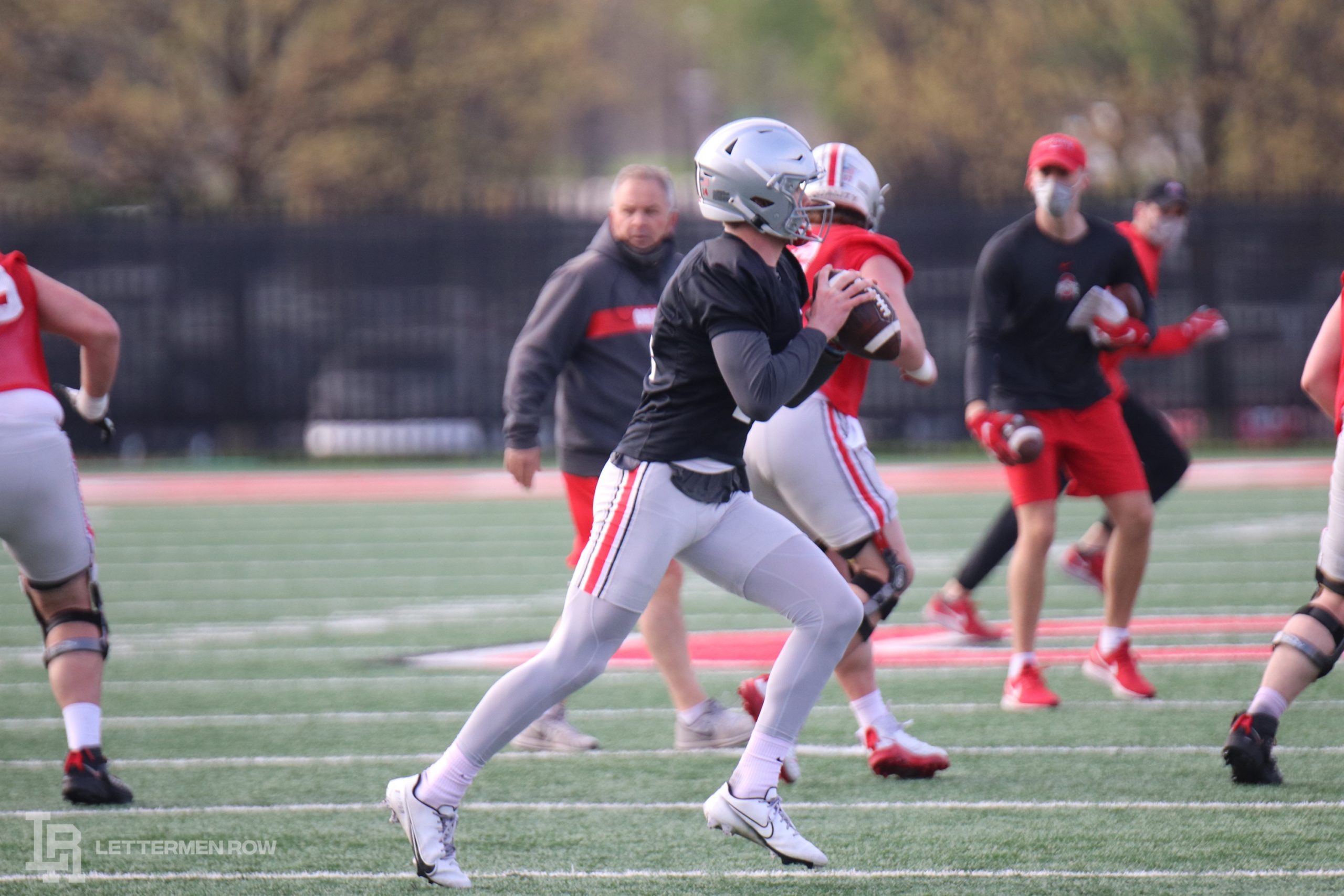 Kyle McCord is gaining experience with every rep this spring at Ohio State. (Birm/Lettermen Row)

That’s why McCord must make the most of every practice. He has ground to gain, but the potential is already flashing for the five-star freshman. McCord has shown the physical traits so far in camp. He continues to grow mentally as well, but it’s a process for all three quarterbacks eyeing the starting job, especially McCord.

“When we talk about some of the best in the game right now in the NFL, when you talk about the people who have had the most success, the Bradys and the Brees, Rodgers, Russell Wilson, to me, the thing that they’ve mastered is they know where they’re going with the ball before it really even happens,” Day said. “When that ball hits their hands, they know where it’s going for the most part. They’ve already played the game in their head. They can make it look really easy.

“We’ve been challenging the quarterbacks with that. Kyle’s done a good job of that so far.”

Unlike last spring, the Buckeyes have had a full spring of practices, which has allowed McCord to get the needed reps to prove he belongs in the quarterback conversation. After entering the spring with ground to gain on the two older signal-callers vying for the starting j0b, McCord hasn’t done anything to lose the job yet. He’s been impressive for a freshman who is just now learning the offense on the fly while gunning to start in Year One.

Now he enters the Spring Game and the summer program with his goal still within reach. Kyle McCord wants to win the starting job. McCord is showing he can play at a high level. But the Buckeyes continue to remind him of the process.

“There’s no way to speed up the process other than do what we’re talking about,” Day said. “He’s off to a good start and has a bright future.

“But like anything else, it’s just going to take reps.”