SCOTTSDALE, Ariz. — One day Lathan Ransom was hosting the guy he expected to be his position coach at Ohio State in his home out west.

The next night Jeff Hafley was being confirmed as the new head coach at Boston College on the other side of the country.

If ever there was a crash-course introduction into the wild business of football, the four-star safety got it over 24 hours last month less than a week before the early signing period opened. Perhaps it wasn’t completely unexpected, but for Ransom it was still a late curveball after months of having his future plans seemingly secured. 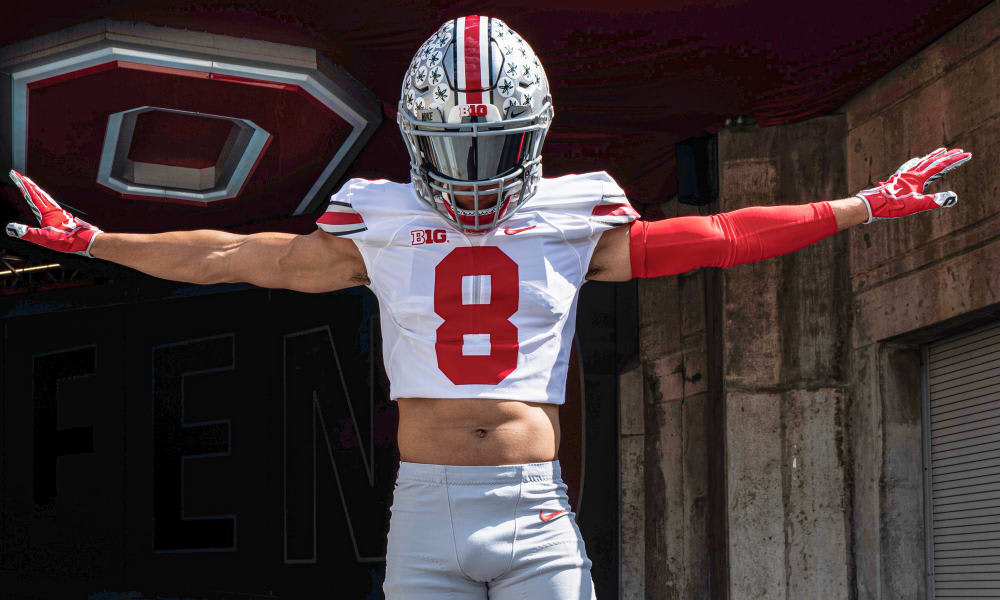 “My phone was blowing up, all types of coaches texting me and sending me the article and stuff. It was just a lot — even overwhelming sometimes.”

So, Ransom needed to have a couple more honest, difficult conversations to make sure he was still certain of his decision. And in the end, his choice was focused more on the overall program in place at Ohio State, the chance to compete for championships and the head coach running the show. The timing may have been a surprise, but the exit was somewhat inevitable anyway since there was never an expectation that Hafley would be around for Ransom’s whole career with the Buckeyes.

Of course, Ransom was excited to play for Hafley after that wildly successful year he spent working with the secondary, helping rapidly transform the worst statistical defense in school history into one of the most fearsome in the nation. The loss of Hafley was a big deal for the Buckeyes, and it certainly didn’t go unnoticed on the recruiting trail with Clark Phillips flipping to Utah and Cameron Martinez electing to wait until a replacement was hired before making his final decision in February.

“That was one of our biggest questions, because there was so much social-media stuff about it beforehand,” Ransom told Lettermen Row. “[Hafley] discussed it with us, and he talked about it for as long as we wanted to talk about it. Then it was all about Ohio State, me coming in and having the chance to have a big impact, just preparing and stuff like that.

“When it’s a school like Ohio State, they have the best coaches. Obviously their coaching staff is going to get other opportunities at places for them, and we understand that. It didn’t affect my decision.”

Ransom wound up with one of the closest views of the situation as it unfolded, and given the whiplash turnaround, it would have been understandable if he needed to take a step back to reassess his options. Rather than shake his confidence in Ohio State, though, it actually gave him a chance to focus on why he chose the program in the first place.

The tough conversations reinforced why the Buckeyes were the pick in the first place, gave him a peek behind the curtain on the coaching profession and also showed why honest, genuine relationships matter so much — even with a coach only representing a program for one last day as a recruiter.

“Love [Ransom], and I was in his home,” Hafley said. “First, I wouldn’t have gone out there if I had known No. 1) I was getting the job and No. 2) I was taking the job. That hadn’t happened, and I wasn’t offered the job at that point. So, I was very honest with him. At that point, I was at Ohio State and I was remaining at Ohio State.

“I think there was speculation during other weeks that I was leaving, and I just tried to be as honest as I could. You’re never going to please everybody, I’ve learned that. And I just think as long as I’m honest with everybody, at the end of the day I can live with that. As long as I’m doing the best I can, I can live with that.Â I put myself out there. I am who I am, and I was honest.”

Ranson took that message to heart, and he also put his faith in Day that he would fill the void on the staff with somebody just as capable of developing him as Hafley.

That guy is likely to be Tennessee Titans cornerbacks coach Kerry Coombs, though Ransom hasn’t pushed for any extra insight and didn’t seem concerned in the slightest during the buildup to the Fiesta Bowl in his conversations with Lettermen Row. Day vowed to hire the best available defensive backs coach, and that was more than enough for Ransom.

“I’m not really worried about it,” Ransom said. “I’m just excited to prepare myself to be ready for whatever coach it is. At the end of the day, that coach is going to be there for the next couple years, and that’s going to beÂ myÂ coach. …

“I want to be a part of Ohio State, their tradition, they’re DBU, the campus — and Coach Day, me and my family believe everything he preaches. That’s my guy, and I believe the coach he’s going to bring in next is going to be just as good or maybe even better than Coach Hafley.”

And thanks to the way Hafley and Ohio State handled that situation last month, the next coach will now get to reap the benefits of working with Lathan Ransom.