Have a question about Ohio State recruiting? This is the place for you. Check-in daily to see what’s on the mind of Buckeyes fans all over the country. Today we’re examining the importance of the first visit to Ohio State for 5-star defensive end Lebbeus Overton, who will visit the Buckeyes this weekend.

Word is that Lebbeus Overton is visiting Ohio State this weekend. Is he a real option for ‘23?

If Lebbeus Overton was ever going to be a real option for Ohio State it was paramount that he get into Columbus this summer and the fact that he’s making a trip to town this weekend is a big deal for the Buckeyes pursuit of him. It’s not easy to get the south’s best prospects out of that region but the power of the Buckeyes football brand makes it easier for Ohio State than for most.

The 6-foot-4, 260-pound Overton is the country’s No. 1-ranked 2023 prospect. He’s a plus athlete as an edge rusher. Overton is also a dynamic basketball player at one of the country’s top-ranked high school basketball programs at Milton (Alpharetta, Ga.) High School. He, like Buckeyes 2022 commit Quinn Ewers has been for the most part, is ranked as a “perfect” prospect, with a 1.000 rating on the 247Sports.com composite rankings. He holds an offer from Ohio State as a football player and a basketball player. He’s a game wrecking defensive player who recorded 21.5 sacks as a sophomore.

His athletic profile is rare, but what makes him really unique is that he’s also a young man with real interest in things beyond sports. Lebbeus Overton is an incredibly bright, focused student with a perfect GPA to go along with that perfect recruiting ranking. His father, coincidentally named Milton as well, is the athletic director at Kennesaw State University outside of Atlanta but worked at Alabama and Texas A&M before that. Dad played at Oklahoma. 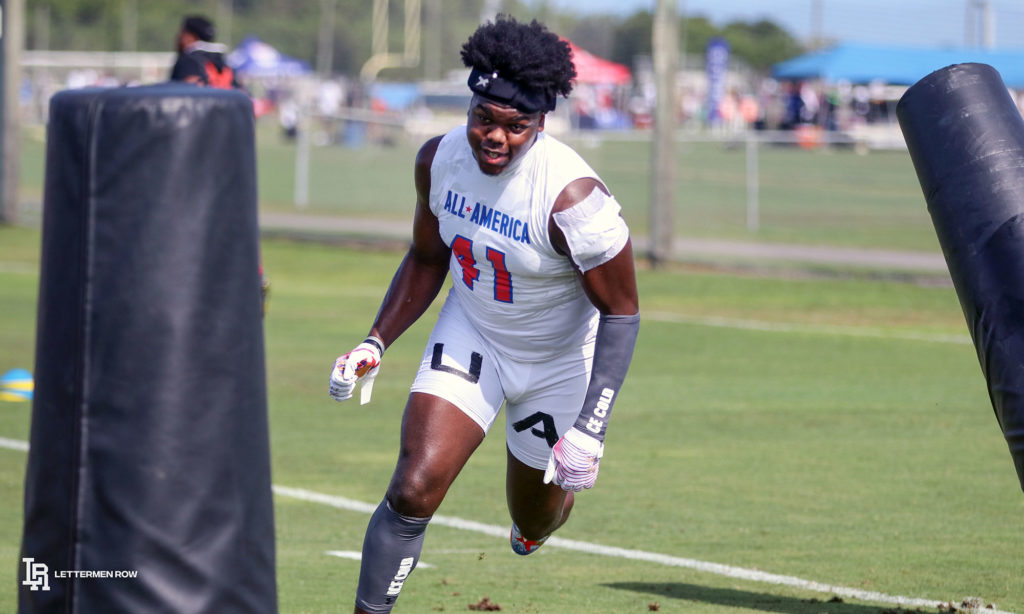 Lebbeus Overton is the type of player and person that Larry Johnson has had great success developing. (Birm/Lettermen Row)

It’s going to be a challenging recruitment from the Buckeyes perspective.

But — to paraphrase someone much smarter than me — every great journey begins with one step. When the dead period ends on Sunday, the first stop Lebbeus Overton will make is at Ohio State. The first step is here. Larry Johnson is no stranger to long odds and sure isn’t going to shy away from them. There are ties to a number of schools not named Ohio State. However, decision to visit the Buckeyes right now, to squeeze it in this summer, indicates that the interest — or at least the curiosity — is very real.

Georgia, Oklahoma, Alabama, Texas A&M, Clemson, Florida and every other big-time program in the country will be involved. None of those schools have Larry Johnson. As with every other defensive lineman, that’s the trump card for the Buckeyes. This weekend is the first chance to play it.