Some believe he’s not an all-around tight end because he was largely unused in the passing game. Others call him overshadowed by other Buckeyes. He isn’t listed on ESPN draft analyst Mel Kiper Jr.’s position-by-position breakdown, probably because he didn’t have the number of highlights as others in the rankings.

But Farrell remains unfazed by the talk. Because what he knows is this: He might not have as many touchdown catches as his peers, but his time in Columbus made him an elite blocking tight end.

“I try not to take offense to it,” he said after Ohio State’s Pro Day. “IÂ understand my value at the next level. I think a lot of coaches and GMs understand that as well. Doesn’t have to be flashy, but I know I can do what they ask me to do and at a high level.”

What Farrell did at Ohio State isn’t something replaceable overnight. A three-year starter, he was constantly relied on to help open up the Buckeyes running game. Doing the dirty work upfront, he never hesitated at making a key block. And he might not have been name dropped often, but both Ryan Day and Kevin Wilson have acknowledged how important finding his replacement is this spring.

He finished his career in Columbus with 44 games played with 34 receptions for 380 yards and 11.2 yards per catch. He had four touchdown catches, too.Â At Ohio State’s Pro Day, Farrell ran a 4.79 40-yard dash and showed off what he can do in the passing game, catching passes from Justin Fields. 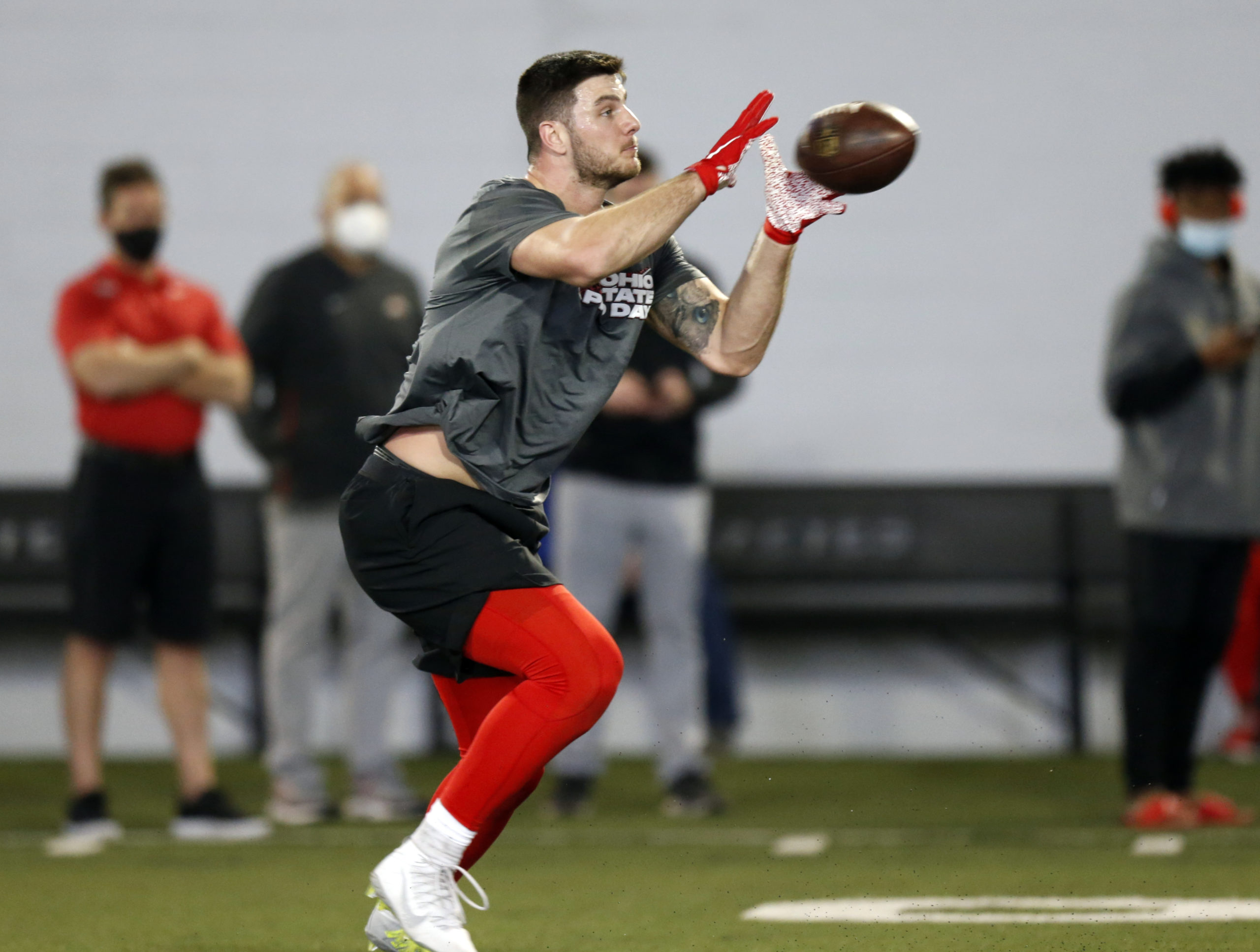 Ohio State tight end Luke Farrell showed he can be a weapon in the passing game. (Paul Vernon/AP Photo)

Most importantly for Farrell during the draft process is he’s focused on both facets of the game. He’s spent time withÂ Duke Manyweather, who works closely with NFL offensive linemen. Farrell knows for him to be a mainstay in the NFL, he’ll have to block at the same level as the linemen next to him. He’s worked with a wide receiver coach, too, running routes three days a week.

“IÂ think that was part of it, just to show my versatility and really show what I’m capable of in the pass game,” he said. ” I think I’m the best blocking tight end in the draft. I think I’m more than capable in the pass game and I’ve showed by capitalizing on the opportunities I got.”

In the College Football Playoff semifinals, Farrell made a spectacular touchdown catch late in the first quarter. Running a hitch route with tight man-to-man coverage on him, he outmuscled the defender for the score.Â The 8-yard was highlight worthy, putting him in the spotlight for a few moments. Ultimately, his teammate in the tight end room, Jeremy Ruckert, finished the game with two touchdowns.

But those few moments he sat in the spotlight showed Luke Farrell is capable of being a weapon in any team’s pass game. And if people still want to call his game one-dimensional, that’s OK.Â He’ll quietly take care of the work necessary on the blocking end.