COLUMBUS — There was no need for Ohio State to rush anything with Master Teague.

But that shouldn’t be mistaken for a lack of speed with the redshirt freshman tailback, particularly now that he’s settling into the program and getting more opportunities to show off everything he can do.

There might have once been an expectation that the most likely way for Teague to carve out a role in the backfield for the Buckeyes was through specialization — potentially by building himself into a short-yardage weapon. Heading into his second season with the program, though, Teague is already proving himself capable of much more as he competes for the complementary role behind J.K. Dobbins with an eye on taking over that primary spot down the road.

“Oh yeah, I’ve developed a lot,” Teague said during spring camp. “At the beginning of last season, you know, I wasn’t too happy with my performance. But as time went on, I just grew in the position, got better at my craft and improved a lot.

“This year, I feel a lot more comfortable on the field.” 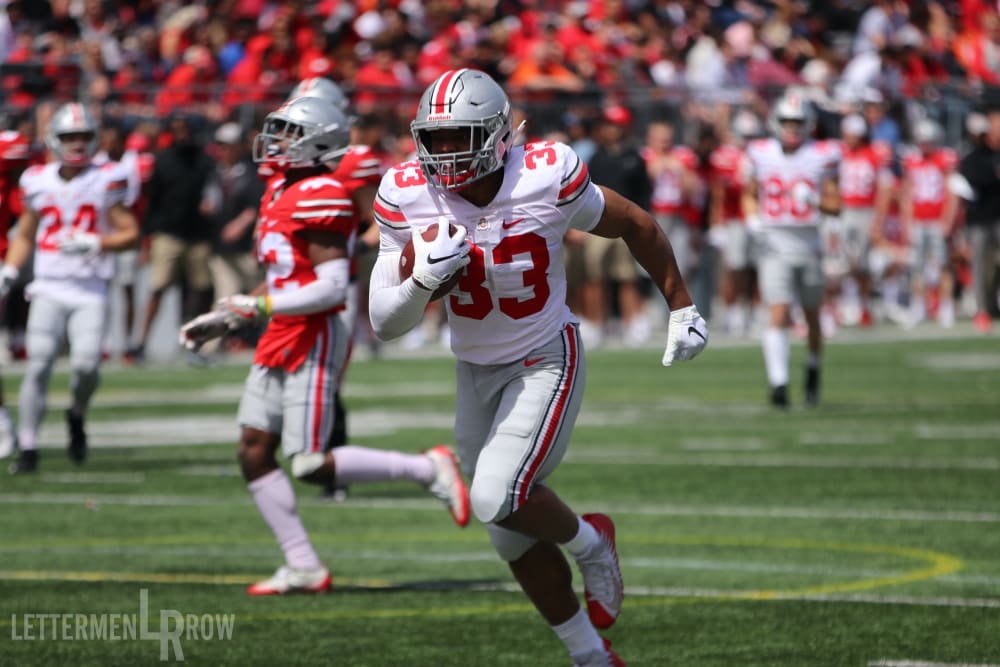 Ohio State running back Master Teague closed out spring with a pair of touchdowns for the Buckeyes. (Birm/Lettermen Row)

Teague certainly looked at home in the Horseshoe when spring camp ended for the Buckeyes, turning his seven carries into a game-high 75 yards with a pair of touchdowns. And while those scrimmage stats can often be misleading when there isn’t any live tackling going on, the burst Teague showed on the way to the end zone on a 22-yard score in the third quarter was a reminder of why Ohio State made the effort to head down to Tennessee to recruit him.

The battle for carries is going to be heated behind Dobbins, there’s no doubt about that. And it’s still early for any solid projections about just how many might go Teague’s way this fall. But there’s no question it was a productive camp for him, and he’s taking some momentum with him now into summer.

What does that mean for Master Teague moving forward? Are changes in his game already evident to the trained eye? What gives the Buckeyes confidence that he can be a difference-maker for the rushing attack? Former Ohio State and NFL running back Beanie Wells was back in the Lettermen Row film lab breaking down that spring-game outing for Teague in the latest episode of BuckIQ.