BELLFLOWER, Calif. â€” He doesn’t say much, but Matayo Uiagalelei has talent that speaks for him.

The 6-foot-5, 260-pound rising junior was a star performer during the Buckeyes one-day camps in June. He’s a 4-star ranked prospect, but anyone who has watched him play knows his upside is higher than that. The younger brother of Clemson quarterback and former 5-star prospect D.J., Matayo Uigalelei checks off every box.

That’s why he turned so many heads when he worked out at Ohio State last month. Kids that size don’t usually move the way he does. Kids with that talent aren’t usually as humble as he is, either.

Matayo Uiagalelei is a different breed, and that has caught the attention of Larry Johnson. The legendary Ohio State defensive line coach and the younger Uiagalelei have similar styles. It’s a work-in-silence approach. So when Johnson jokingly asked Tausha Uiagalelei if her son could just stay on campus following that camp performance rather than go back to California, it meant something.

“That’s kind of special,” Uiagalelei told Lettermen Row. “I just feel like it kind of lets me know the potential I have, but I can only get there if I keep working. He’s coached so many great players. To hear that from him is special.”

The big question is whether or not it’s special enough for Uiagalelei to focus full-time on being a defensive lineman. Similar to J.T. Tuimoloau, his athleticism means he could be a dynamic tight end if he wanted to play offense. As a young player, it’s fun, practical and worthwhile to play multiple positions. That’s nothing that is likely in college. One way or another, California’s No. 3-ranked prospect will be asked to narrow his focus.

Right now he’s not ready to do that.

“I’m not sure yet, it’s between tight end end defensive end,” he said. “You know, I am going to go out here and do my best, use the tools that I have and make some plays.” 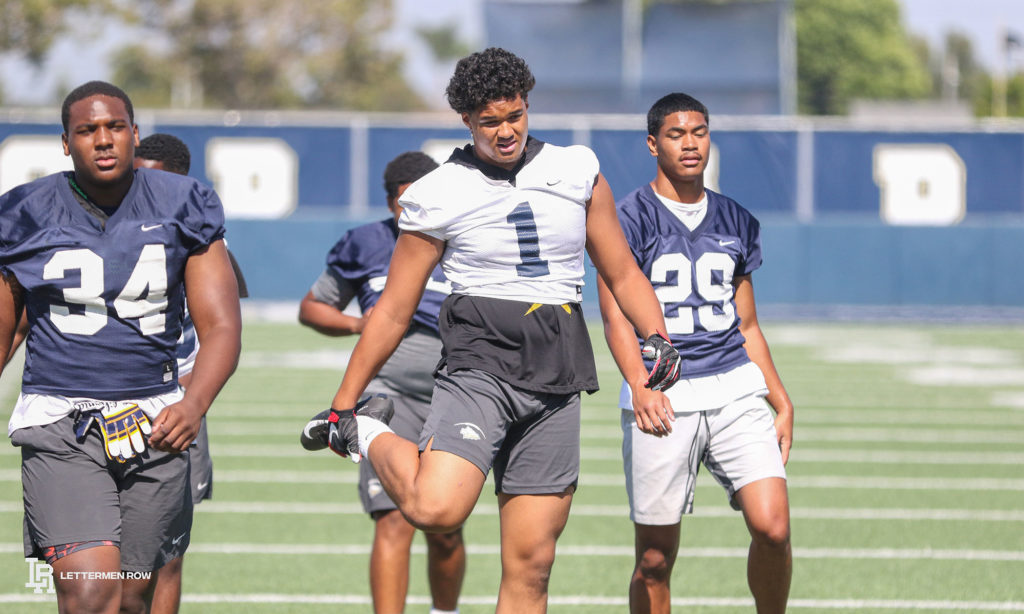 Matayo Uiagalelei is back at practice with his St. John Bosco teammates now that June is over. (Birm/Lettermen Row)

Matayo Uiagalelei wants to be great, make no mistake about that. Who will help him become the best he can be? That’s the biggest thing he’s looking for as he examines his early scholarships, which include Alabama, Clemson, LSU, Texas, Oregon, Michigan and every other major program in the country.

“For me, on my recruiting list, Iâ€™d probably say player development is No. 1,” Uiagalelei said. “So, there are a lot of other good schools that can develop me as a player — and this is one of them, too.”

The focus for Uiagalelei is getting to the next level. That’s what makes Larry Johnson and Ohio State a real option, even with his brother at Clemson.

â€œYou look at his resume, you just see Nick Bosa, Joey Bosa, Chase Young,” he said. “All these great defensive lineman and defensive ends. As a defensive end, this is the place Iâ€™d really consider going if I wanted to develop my game to the highest.â€

And that’s going to keep Uiagalelei’s attention. The intensely private, uber-talented athlete isn’t likely to be caught up in the glitz and glamour of recruiting. That’s key takeaway for Matayo Uiagalelei from his brother’s recruitment.

“I learned a lot,” he said. “Just seeing how some schools, some recruits, are looking at things that don’t really matter as much. There are other things that matter more.”

Ohio State is hoping that the budding relationship between Matayo Uiagalelei and Larry Johnson is one of the things that matter most.