COLUMBUS — The situation at Ohio State for Matthew Baldwin certainly looks different than when he arrived.

Not better. Not worse. And in terms of his opportunity for playing time, it’s possible that not all that much has truly changed.

But the guys he was supposed to be competing against are gone. His quarterback coach is now running the entire program. And after just one year spent primarily rehabilitating an injured knee, the redshirt freshman from Texas has suddenly spent more time with the Buckeyes than any other quarterback.

“This time last year, Coach Day used to say in meetings when he was teaching the offense, it’s kind of like learning Chinese,” Baldwin said. “You don’t really know what’s going on until you’re on the field getting it. I’ve grown mentally, knowing the playbook. And in terms of my leadership role, I’ve had to step up.

“I was kind of forced into that role so quickly because we’ve lost Dwayne [Haskins], Joe [Burrow] was here last year, Tate [Martell] was here. We lost three veteran guys, and now I’m the guy who has been here the longest. That did happen fast, but I think I’ve stepped into it.” 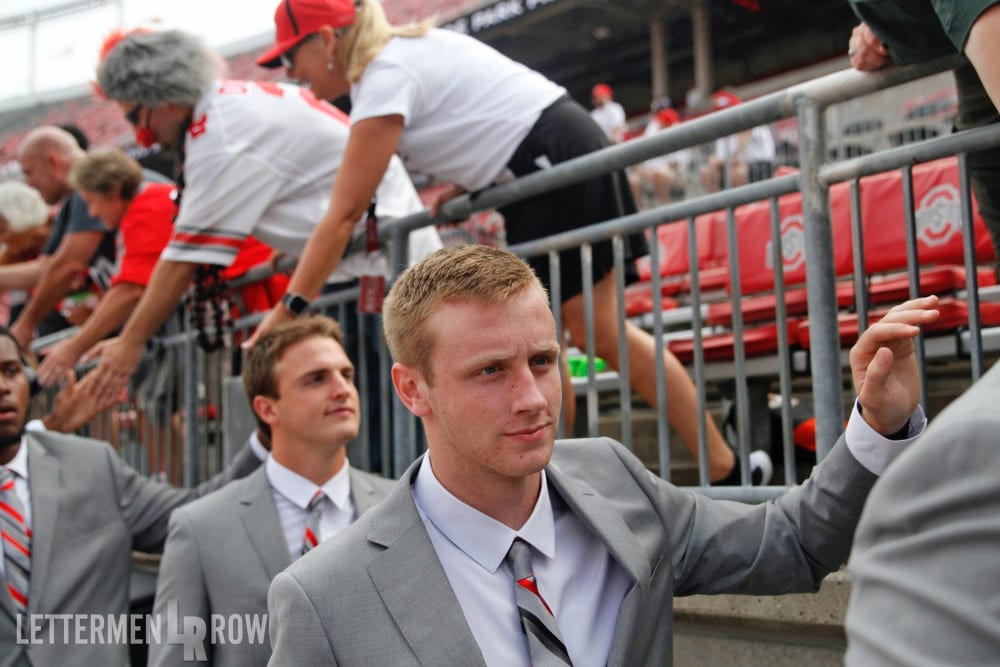 Ohio State quarterback Matthew Baldwin is competing for a key job with the Buckeyes. (Birm/Lettermen Row)

While those three guys were all taking different exit doors from the program, there was obviously one notable guy making his entrance. And the arrival of Justin Fields provided one more new wrinkle for Baldwin during his time here as the Buckeyes go through spring camp trying to settle the depth chart at the most important position on the field.

Thanks to his recruiting ranking, Fields instantly became the odds-on favorite to win the starting job, and the Georgia transfer has taken the first-team reps during the open periods of practice so far. And the truth of the matter is that Baldwin was never really supposed to be the starter heading into his second year with the program regardless of who else was on the roster.

Haskins could have decided to stay for another year after his record-setting campaign instead of heading to the NFL. In a much longer shot, Burrow could have elected not to transfer to LSU last season in the hopes of getting one year to lead the Buckeyes. Or Martell could have backed up his big talk before the Rose Bowl and fought for the starting job with Ohio State rather than jetting to Miami at the first sign of another competition.

All of those options probably would have given Baldwin another year or two to develop before making the leap into the starting lineup. Perhaps that will still be what happens with Fields around. But there is at least another possible option now given Baldwin’s health, arm strength and knowledge of the playbook.

“Well, Tate was also a five-star, so I knew no matter what that you’re going to be competing against somebody good here, right?” Baldwin said. “I think I was kind of chasing Tate, that was kind of my position, so I had a fire under me. Now Tate leaves and Justin comes, so I guess he’s kind of chasing me or we’re kind of fighting each other.

“I don’t think [I’m chasing], no. I mean, we started off even. It is different, but I think I have the same motivation.”

Baldwin has made no secret what that goal is eventually, because he didn’t leave the Lone Star State with the intention of being a career backup.

Patience would be ideal with Baldwin, and he’s shown that trait before when he was in high school at Lake Travis and had the chance to transfer elsewhere rather than wait for his only turn to lead as a senior. Maybe that will be necessary again with the Buckeyes, or maybe he’ll show exactly why he was personally recruited by Day in the first place and emerge as an upset winner of a head-to-head battle with Fields, taking over earlier than anybody might have expected.

It’s still too early to know for sure, and Baldwin clearly looked nervous and aware of those stakes when spring ball opened two weeks ago. But a couple days later, he already appeared to be sharper, more confident and at times more accurate than his competition, setting the stage for what should be a much more enjoyable spring than his last one.

“Well, I was in the Pit over there where the injured guys work out,” Baldwin joked. “It’s generally not a very happy place. I worked out over there and didn’t get to do much, it was all mental, just trying to learn the stuff. Mental reps are awesome, that’s really how you learn when you can’t play. But you can’t really know an offense until you’re in it and playing. I learned that in the season when I was actually getting reps, the offense just started clicking.

“All the newness, the jitters have kind of worn off and you’re getting in the groove with your guys, you’re all pushing toward the same thing.”

The guys around Baldwin in the quarterback room have changed plenty since he arrived, and it’s possible the timeline for his career might have as well. But in the end, the situation for him at Ohio State essentially remains the same.

The Buckeyes are always going to be talented at quarterback, and Matthew Baldwin is going to have to keep grinding if he’s eventually going to be the starter.