Ohio State had an incredible season last year on its way to the College Football Playoff, where it nearly beat Clemson and advanced to the national title game. Many of theÂ key players from that team moved onto the NFL. How will the Buckeyes replace those departures? And who could step in to make plays similar to what the former Buckeyes made last season? Lettermen Row is breaking down key plays and who could make them. Next up: How the Buckeyes can find a replacement for Jeff Okudah.

Okudah made it known that he wanted to win the Thorpe Award, given to the nation’s top defensive back. He was certainly in the running, and he had the best case of any finalist, although he was beaten out for the honor.

â€œI believe Jeff Okudah is the best corner in the country,â€ former Ohio State defensive coordinator Jeff Hafley said near the end of last season. â€œAs that Thorpe Award comes near, Jeff is as talented as any player, [any] corner that Iâ€™ve been around. And Iâ€™m not taking that away from the other corners, but what Jeff Okudah has done this year â€” maybe he doesnâ€™t have the production because no oneâ€™s throwing him the ball, but when they do, theyâ€™re not catching it. Heâ€™s taking guys out of the game.”

Replacing a No. 1 cornerback is always difficult, no matter if that corner is a Thorpe Award finalist or not. But Okudah was just that, the best cornerback in the country, a first team All-American and a leader for the Silver Bullets defense. The pipeline and history of Ohio State cornerbacks suggests that the next great one is already on the roster and will step in with ease, but Okudah might be the best the Buckeyes have had.

That won’t be easy to replicate.

Jeff Okudah was a lockdown cornerback for Ohio State.

Okudah will certainly be a top-10 pick in next week’s NFL Draft. That’s never easy to replace, even at a juggernaut like Ohio State. Where do the Buckeyes turn to find his replacement as a lockdown cornerback? Lettermen Row is examining the options moving forward.

Shaun Wade:Â Wade came back to Ohio State be a No. 1 cornerback and prove he can be a lock-down guy on the outside, not just a slot corner with ability. A Kerry Coombs recruit, Wade will now get to play for Coombs, and he’s likely to learn even more about being an NFL corner after spending a year with the former Titans secondary coach. After an impressive season in which he displayed game-changing ability a year ago, Wade has a chance to win the Thorpe Award and be a high draft pick if he continues progressing. 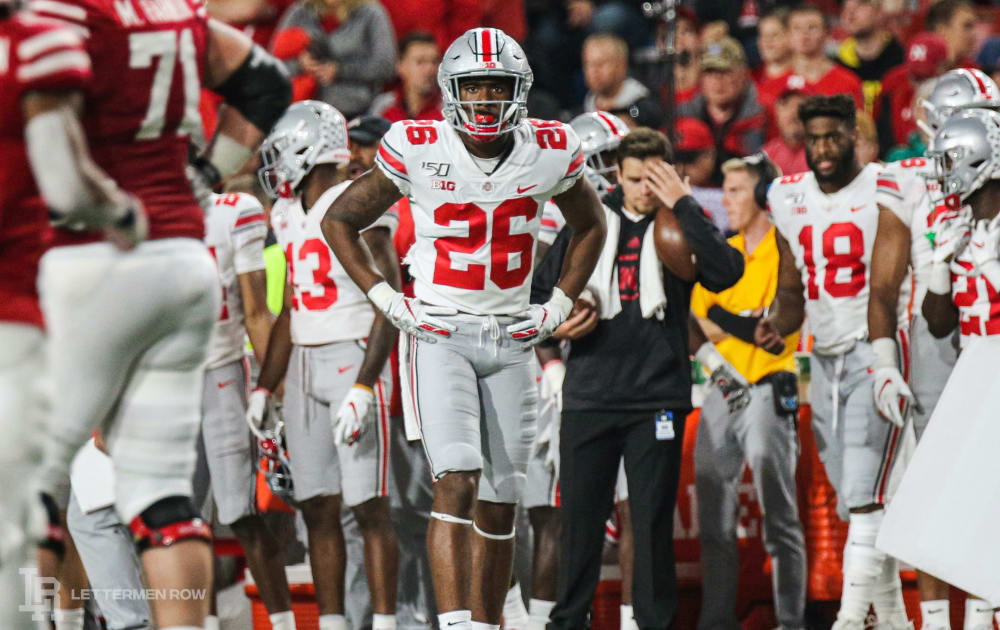 Cameron Brown could be an option for Ohio State. (Birm/Lettermen Row)

Cameron Brown: Brown was the primary backup last season behind Okudah and Damon Arnette, the third cornerback and a key piece for the defense. When Okudah and Arnette each came out of games with small bumps and bruises, Brown was able to show what he can do on the outside. Can his progression continue and allow him to make the leap into a great Ohio State cornerback? That won’t be known until the fall. He and Sevyn Banks will likely play on the opposite side of the field as Wade. One of them will need to break out.

Sevyn Banks:Â In the few spring practices the Buckeyes were able to go through before the shutdown, Banks looked like a different player after another winter in Mickey Marotti’s weight program. Banks added some muscle to his lengthy build, something that could help him develop into a superstar cornerback in an already-loaded secondary. If Banks and Brown get to go head-to-head for one of the starting jobs in fall camp, it could be the best position battle the Buckeyes have.

Wade’s decision to return to Ohio State for another season instead of going to the NFL Draft was a huge boost for the Ohio State defense that will replace three starters from last season. Now he has to take on an even larger role than he had for the College Football Playoff participant from a season ago. Maybe that means he’ll be locked up man-to-man on the outside like Okudah was most of the year, or maybe Wade will stay in a versatile role and blitz, stop the run and shut down receivers in coverage. No matter how the Buckeyes use him, Shaun Wade will be one of the biggest keys this season.