INDIANAPOLIS — Dre’Mont Jones was as surprised as anybody.

The former Ohio State defensive tackle also found out the same way as everybody else that somebody, somewhere in the NFL believes he might be able to play linebacker.

So, a request was made for Jones to participate in the NFL Combine testing drills at that position in addition to his normal duties on the defensive line. And after seeing that information pop up on Twitter on Saturday morning, Jones accepted the offer as part of his overall mission at Lucas Oil Stadium to enhance his value and potentially solidify a spot in the first round of the draft in April.

“Yeah, I was a little surprised to see that,” Jones said. “But I’m definitely doing it.Â I really don’t know [where it came from]. I just saw it this morning like everybody else. I didn’t get like a special heads up or anything, it was just on Twitter and I was like: What?Â Playing linebacker?

There is little doubt that Jones is eventually going to find a home in the trenches at the next level given his success there with the Buckeyes. Heading into the weekend, there was still some discussion at times about whether he’s better suited staying at tackle or if he could use his terrific pass-rushing techniques at end at the next level. 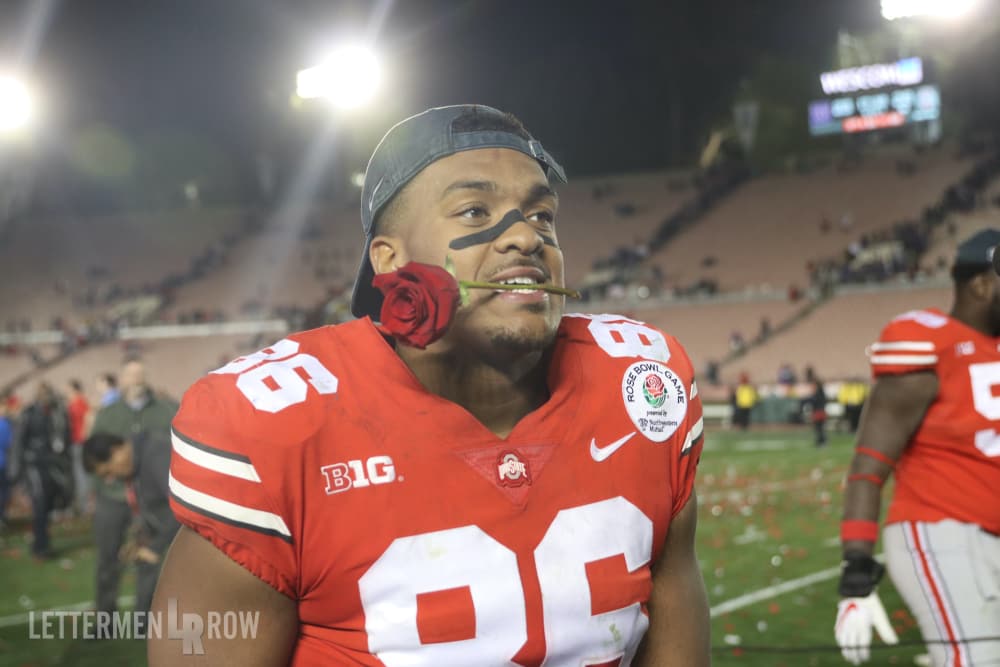 Jones also has a high-profile ally in Nick Bosa, who is spreading the word in his own meetings at the NFL Combine with team representatives about just how valuable his former teammate is at tackle.

“He’s the best interior pass rusher in the draft, I think,” Bosa said. “I watched it every day at practice, and you just don’t see interior guys with the hips and hands that he has. I’ve been talking him up really good to a bunch of teams because he’s my best friend. People ask me who would you bring to war if you got to pick one guy from Ohio State, and it’s easily him.

“I mean, just go back to the tape. It speaks for itself.”

Those clips are obviously of Jones working with the Rushmen. And the linebacker question seemed to come out of nowhere.

But Jones has never backed down from a challenge, and if nothing else, his willingness to compete and step out of his comfort zone could go down as another positive for him. And he also offered a reminder that he has some skills that can translate to more than just playing on the line.

“I guess they should watch the TCU game, because not too many defensive linemen catch a Pick Six in this league, so definitely watch that game,” Jones joked. “But I expect probably I’ll play a little bit of both, rotating from end to tackle.

“[Being a first-round pick] is very important. I looked forward to this all my life. I want to be there in Tennessee on the stage and holding up a jersey and smiling at the camera, just being proud of all my hard work. If I don’t, that’s not a failure. I’ll still be happy.”

Dre’Mont Jones is clearly eager to please, and even willing to line up in unexpected places to accomplish his dream.