Nick Bosa has been the best player on the field at every level he’s played.

One of the top-rated talents coming out of high school in Florida, Bosa chose Ohio State, where he was rarely stopped during his time in Columbus.

So when he was chosen No. 2 overallÂ as the first non-quarterback taken in last year’s NFL Draft, he had plans to be the best defensive rookie in his class. And he accomplished it.

Now with a brilliant regular season and Rookie of the Year honors, all that’s left for Bosa to do to have a near-perfect rookie season happens Sunday, when he and the San Francisco 49ers face the Kansas City Chiefs in the Super Bowl. Bosa’s journey from his shortened season at Ohio State to the best rookie in his class has been a long one.

He went through injuries and first-game struggles, but now, he’s at full strength to try winning his first championship ring since capturing the 2017 Big Ten title with the Buckeyes.

“I was just coming in trying to get my feet under me like any rookie,” he said. “Came off an injury, so I was trying to get that all squared away and just get the speed of the game under my belt. Once I started getting comfortable in camp, then I thought I could have a big role on the defense. I just want to bring that young energy.

“It doesn’t seem like I have that much energy, but on the field, I definitely bring a little more energy.”

Bosa acknowledges how good his college teammates were with him, but now that he’s with other All-NFL caliber players, he can reflect on how special the talent that’s been assembled around him has been throughout his career. 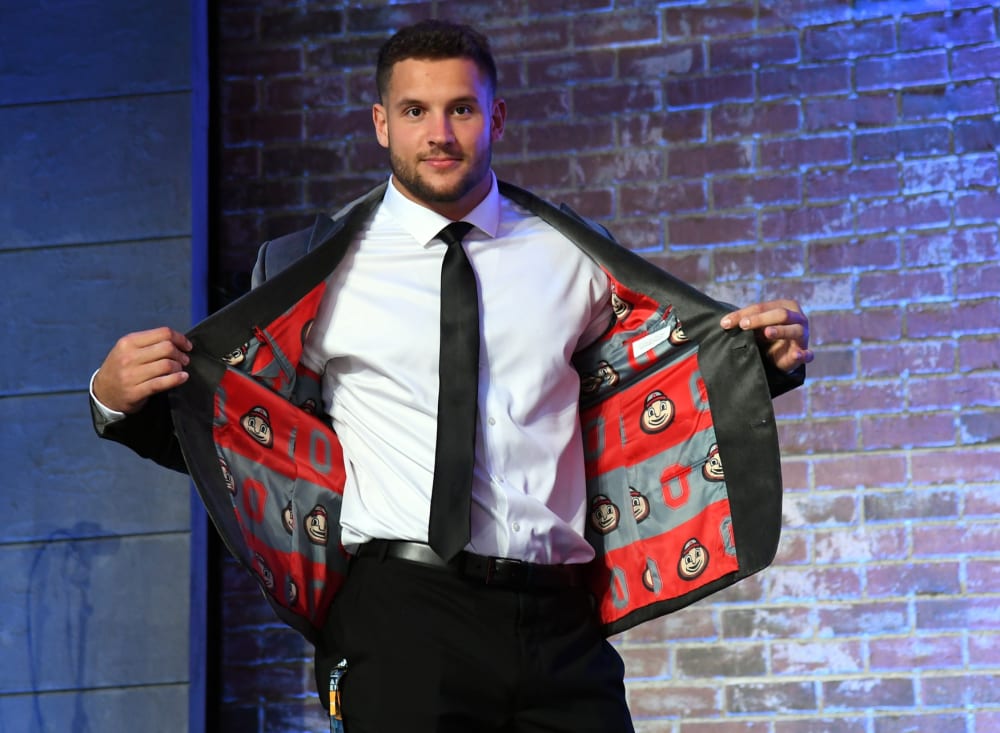 Nick Bosa and his brother, Joey, are two of the best young defensive players in the league. Chase Young will join them on that list next season. Sam Hubbard, Jalyn Holmes, Tyquan Lewis and others all contribute in the NFL. And all are from the same defensive line pipeline from Ohio State to the NFL.

Whether Bosa knows it or not, he’s the gold standard for making the leap at Ohio State and turning it into instant success in the NFL. His name is destined to come up in recruiting pitches and visits for future defensive ends. Larry Johnson and Ryan Day will certainly use Bosa as an example of transitioning from Ohio State success to NFL success — and maybe even Super Bowl success.

“It took maybe more than just the first game, although once you get a few reps under your belt, the game atmosphere just starts to feel like football again,” Bosa said about the jump from Ohio State. “Then it’s just you versus an offensive tackle. First game, I was coming off an ankle thing from camp, and I kind of tweaked it early in the game, wrapped it up and started getting some good rushes. I was like: ‘All right, yeah, I can definitely do this.'”

Bosa credits his physical shape now to his success. He claims to be in better shape than he was with the Buckeyes and when he was in high school.

He already accomplished so much at both of those levels — including Ohio State.

Now, that success might translate to a Super Bowl ring in just Year One.

“It would mean everything to me,” Nick Bosa said. “Obviously, we put in all this work all year for one goal. And we’re here now, so I’m excited to be here. I love my team, and I’m glad we get to do it down here.”