The speculation, debate and conversations about Ohio State never end, and Lettermen Row is always ready to dive into the discussions. All week long, senior writer Austin Ward will field topics about the Buckeyes submitted by readers and break down anything that’s on the minds of the Best Damn Fans in the Land. Have a question that needs to be tackled, like the one today about Ohio State and the linebackers? Send it in right here — and check back daily for the answers.

How do you guys see the linebacker situation playout? Who will replace Leek as the leader of the group? @ZBoren44

There’s really nothing more that Al Washington could ask for this season.

The Ohio State linebackers coach has two multi-year starters returning with championship experience and the respect of the entire team. He’s got another veteran with big-game production who can play in every spot and likely would have been a draft pick had he elected to turn pro. There’s another hungry, versatile senior who has battled through major injury adversity and is finally looking like he’ll get a chance to show what he can do without having to spend all of his time rehabbing. And behind those guys are three younger tacklers who all have shown they can be impact players on special teams and in limited reps off the bench.

So, it’s almost impossible to figure out exactly what Washington is going to do with that embarrassment of riches for the Silver Bullets. But it’s certainly a safe bet that he could be rolling out the most dominant, dynamic group of linebackers in the Big Ten — and it might be one of the deepest in the country.

Yes, Malik Harrison stuffed the stats sheet last year before becoming a third-round NFL Draft pick. His off-the-charts athleticism helped him lead the Buckeyes in overall tackles while also chipping in 16.5 tackles for loss. Obviously that’s a decent chunk of play-making to replace, though to be fair, there were times he was a bit overaggressive because of confidence in his ability that would leave him out of position. Still, he made plays much more often than not. The good news for the Buckeyes is they don’t have to pick just one guy to pick up that slack — and given the guys they have to work with, they probably won’t as the rotation will likely expand. 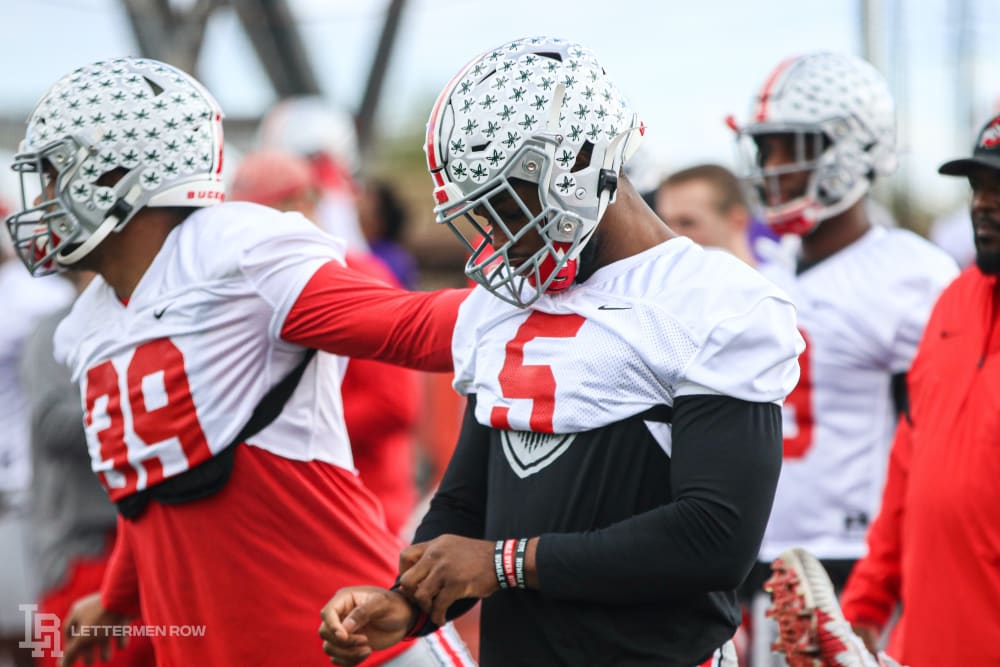 Ohio State linebacker Baron Browning is back for another season with the Buckeyes. (Birm/Lettermen Row)

Tuf Borland isn’t going anywhere as the reliable anchor in the middle. That’s just about the only given for the Buckeyes, because even though Pete Werner is probably going to play more snaps than any linebacker this season, he’s a chess piece that Washington and the coaching staff aren’t afraid to move around into multiple spots. Those two guys are going to remain foundational building blocks for the Buckeyes for one more season, and their leadership and veteran presences are key to unlocking the rest of the potential and flexibility for the unit.

Baron Browning would seem to be the most likely candidate to take on Harrison’s role coming off the edge as a blitzer or extra pass-rushing threat, which is no surprise since he actually had more sacks than his old teammate last season. But the Buckeyes clearly have designs on a role for Justin Hilliard after he was lining up outside during that lone week of spring practice in March, Teradja Mitchell clearly has to be part of the plans moving forward and K’Vaughan Pope has shown a couple impressive flashes that he has the tools to be a factor as well.

Even without Harrison around now, the Buckeyes could actually be much more dangerous at linebacker this year, especially since all of them will be in their second season working in the scheme with Washington and Greg Mattison.

â€œWe have to do a really good job of trying to create ways to think outside the conventional defense and put guys in roles so that they can do what they do best,â€ WashingtonÂ said in March. â€œThat is what weâ€™re doing now.

“Everybody wants to play. I think weâ€™ve got to do a really good job of keeping them engaged. Fortunately last year, all of those guys played, and it wasnâ€™t like they played in the fourth quarter when the game was over. They played in some critical moments. So I think that piece of it helps. But itâ€™s a daily deal, itâ€™s a culture deal and itâ€™s a brotherhood deal.â€

The Buckeyes have to replace one of their linebacker brothers from last season. But there are several different guys ready to do it, and all of them are going to get a chance.