The Buckeyes were in the midst of a long win streak, taking down ranked teams on the road and looking like a potential No. 1 seed in the NCAA Tournament. Now, however, the Buckeyes have lost three games in a row — two at home — and have some regrouping to do before postseason play.

The teams that have taken down the Buckeyes in the last 10 days? All potential tournament teams. So the Buckeyes must now figure out how to turn the page on the losing skid, understand that the schedule did them no favors with this brutal stretch of games to close out the regular season and fix the issues that have plagued them lately.

â€œItâ€™s hard in the moment,â€ Ohio State coach Chris Holtmann said. â€œI think itâ€™s hard for all of us. As much as you want to look at the closing stretch and talk about what it is with three top-10 team and a team that is tough to play at their place, what we can own is areas as coaches and players where we just have to get better. Thatâ€™s what weâ€™re going to try to do. Certainly, this is unlike any stretch Iâ€™ve ever been a part of. But what Iâ€™m hoping is it gets us better and itâ€™ll be a measure of our ability to handle disappointment, adversity, challenges.

â€œThis is certainly the first time this season weâ€™ve had a stretch like this. Even though you look at it and and you can anticipate struggle, itâ€™s certainly challenging in the moment. I think the balance between recognizing weâ€™re playing a ridiculously hard closing stretch and then owning areas that we have to get better as coaches and players is the challenge for us moving forward. Itâ€™s a balance.â€

Finding that balance before Saturday, when the Buckeyes host No. 4 Illinois to close out the regular season, will be tough. They already have a win over the Illini on the road this season, and the sweep of a fellow potential No. 1 seed will go a long way for the Buckeyes entering the Big Ten Tournament next week.

Despite the losing streak, Ohio State has plenty of reasons to be optimistic about this next stretch in March into the Big Dance. Lettermen Row is breaking those down. 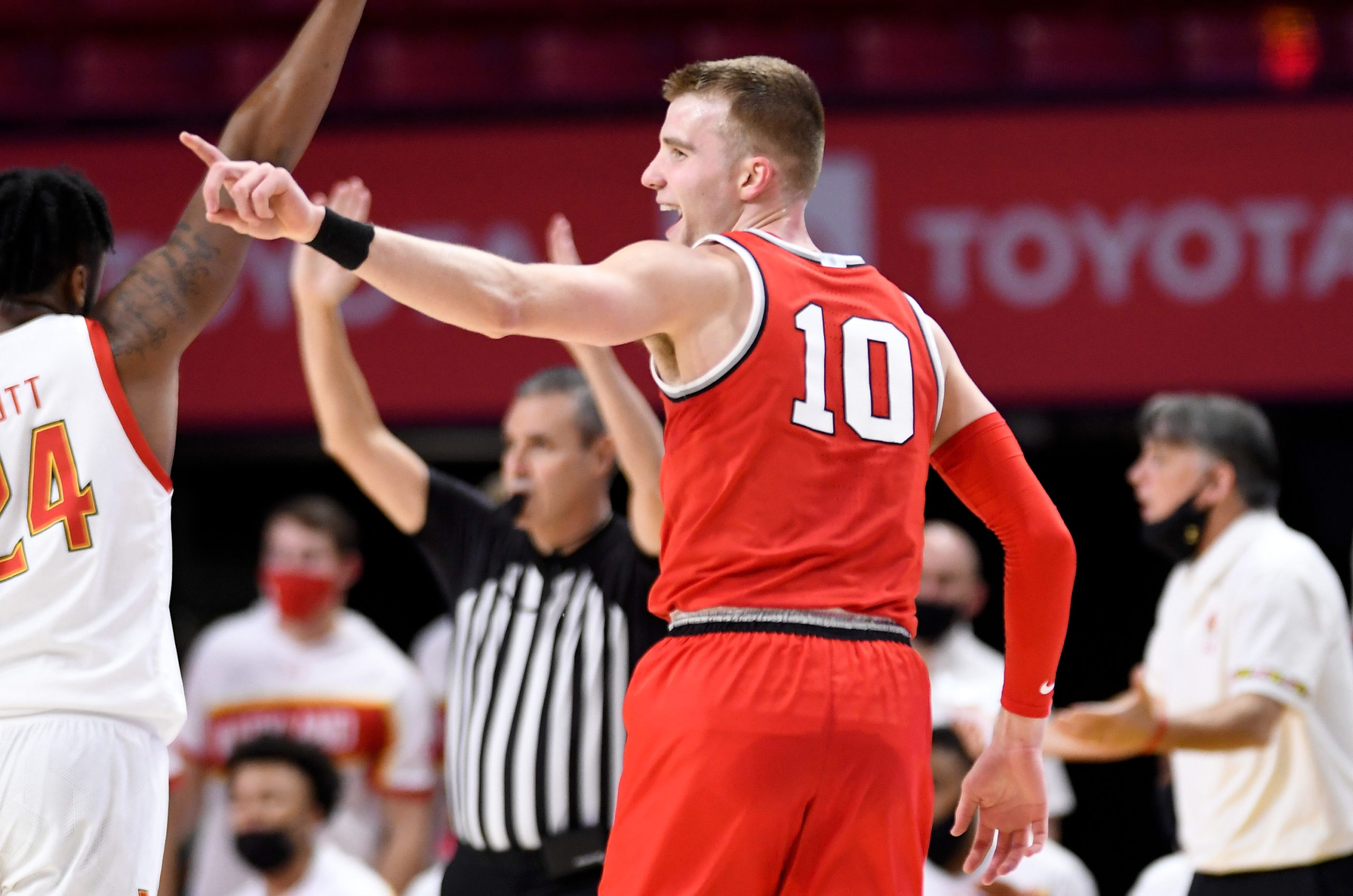 Justin Ahrens is one of the best 3-point shooters in the country. (G Fiume/Maryland Terrapins/Getty Images)

The Buckeyes certainly aren’t one of the top defensive teams in the country. Ohio State knew it would struggle on defense, even before the season started. But the offensive end of the floor has been where the Buckeyes find their most success. Ohio State is currently the No. 3 team in the country in adjusted offensive efficiency, according to KenPom. The Buckeyes have two scorers, Duane Washington Jr. and E.J. Liddell, capable of taking games over — no matter the opponent. They have good ball-handling guards, 3-point shooting and a strong supporting cast to help shoulder the offensive load. They may not have a dominant NBA-level scorer, but the Buckeyes present a balanced offensive attack that will be a headache for any team they face in March.

Ohio State has plenty of Quad One wins

Ohio State may not be playing its best basketball right now, but the Buckeyes have played one of the toughest schedules in the country and come out of that rough Big Ten slate with a bevy of good wins. The Buckeyes have seven Quad One wins. Only two teams in America have more than Ohio State — Michigan and Illinois, which each have eight Quad One wins. Two wins over Rutgers, road wins at Illinois, Wisconsin, Maryland and Iowa and a neutral-site win over UCLA have given the Buckeyes one of the top resumes in college basketball — and they’ve proven they can beat multiple NCAA Tournament-caliber teams, no matter the setting or venue. With a regular-season-ending home game against Illinois and the Big Ten Tournament remaining, the Buckeyes could still snatch more Quad One wins down the final stretch.

Perhaps the reason to remain the most optimistic about Ohio State basketball is Chris Holtmann. The fourth-year head coach has been to the NCAA Tournament five times in his coaching career. He has won at least one game in every appearance in the Big Dance. He made a run to the Sweet 16 at Butler and took two Ohio State teams to the Round of 32 with rosters that weren’t close to the current roster in terms of talent. Holtmann has a proven track record of NCAA Tournament success, and once the Buckeyes find out their seeding for the Big Dance, they’ll know their path to a tournament run deeper than Holtmann’s ever been. This team is capable of it, and it has a proven coach to lead it.