Ohio State entered its top-10 contest against Iowa riding a hot streak that extended through all of January.

That impressive stretch continued into February on Thursday night for the No. 7 Buckeyes, who escaped Iowa City with an emphatic 89-85 road win over No. 8 Iowa inside Carver-Hawkeye Arena.

The win gives Ohio State (15-4, 9-4 Big Ten) its seventh in the last nine games since the beginning of January, as the Buckeyes seem to be playing their best basketball at a crucial point in the Big Ten regular season. Ohio State is now ahead of Iowa (13-5, 7-4) in the Big Ten standings as it moves closer to the top of the conference.

Ohio State used a massive 17-5 run to regain the lead after Iowa took an 11-point advantage midway through the second half, and the back-and-forth offensive outburst from both sides never relented. Justin Ahrens hit three 3-pointers in the final five minutes, and the Buckeyes knocked down 14 3-pointers as a team on their way to yet another huge win late in the season.

Lettermen Row is breaking down the emphatic Ohio State win with Three Points from the shootout in Iowa City.

Ohio State and Iowa are both terrific on the offensive end of the floor, and Thursday night was no different. Ohio State hit 14 3-pointers and shot 48 percent from the field, showcasing its offense in every aspect. Iowa did the same, shooting 45 percent from the floor and keeping pace with the Ohio State shooting outburst. The fast-paced style and plenty of offense made for an entertaining game throughout. Kyle Young and E.J. Liddell both had 16 points to lead the Buckeyes, while Duane Washington Jr. had 15 and Justice Sueing had 12. There were 18 lead changes, and the Buckeyes ultimately outlasted the Hawkeyes in an impressive display of offense. 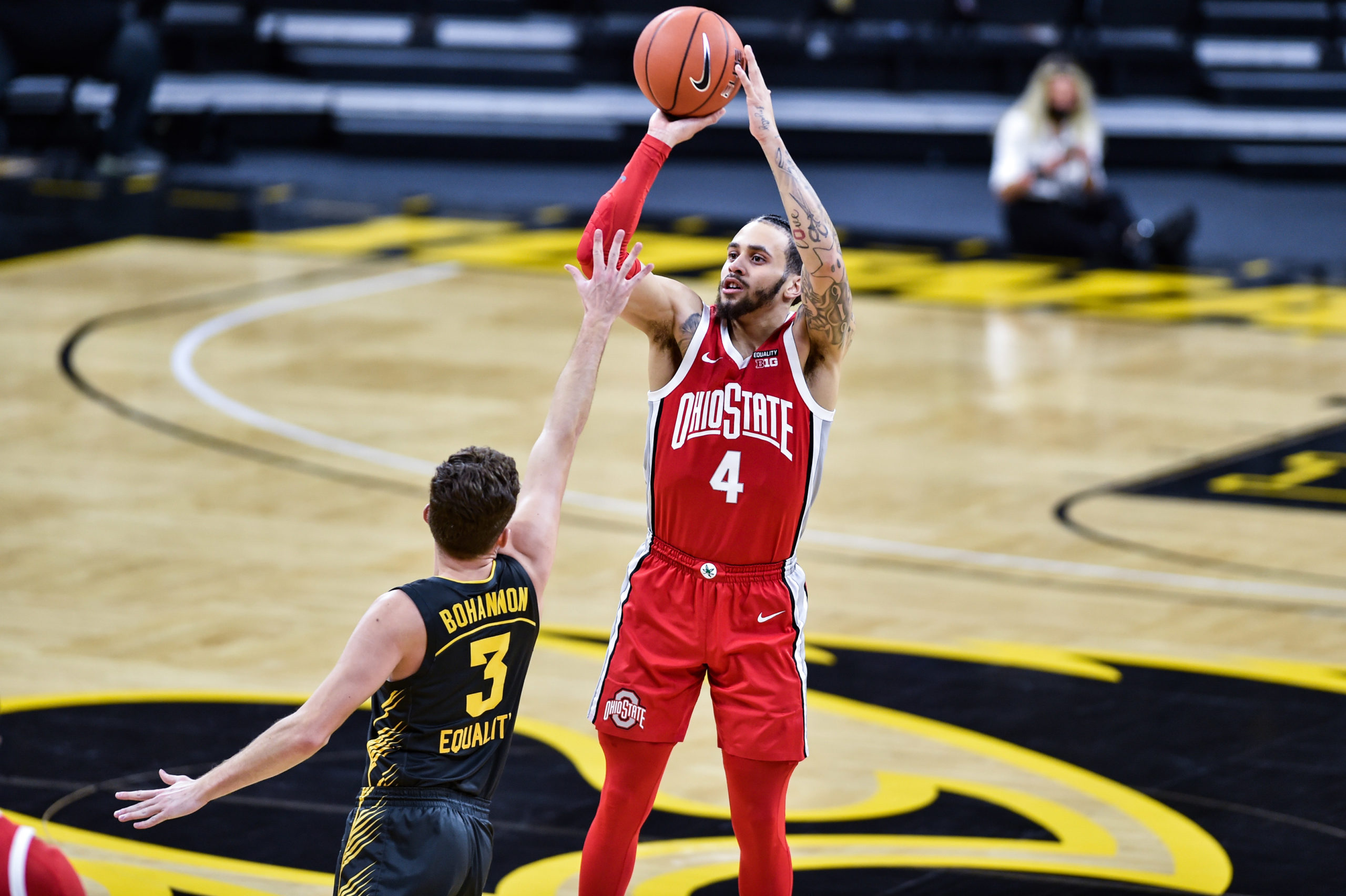 The Buckeyes came into the road matchup with Iowa as a clean basketball team, coming in at No. 15 in the country with just 10.6 turnovers per game. And the Buckeyes made sure to take care of the basketball to keep pace with Iowa. Ohio State turned the ball over just six times, allowing Chris Holtmann’s team to keep pace with the high-scoring Hawkeyes and eventually outlasting them. Ohio State distributed the ball well with 20 assists and continued its trend of low turnovers per game — which helped the Buckeyes leave Iowa City with a massive Big Ten win. If Ohio State can keep its turnover numbers low, it will be tough to beat over the next month of the year.

Ohio State did what it could to limit the impact of Iowa center and National Player of the Year favorite Luka Garza, using double teams in the post and the presence of big man Zed Key in the first half. Garza had 11 points, but all of them were hard-earned. The Buckeyes continued to do a good job against Garza in the second half. The senior that averages 26.5 points per game had 16 points and seven rebounds for the night, but nothing came easy. Ohio State did its best to defend Garza. Like in nearly every game this season, Garza had his impact. But the Buckeyes were still able to find ways to win down the stretch.