COLUMBUS â€” At this point in the Big Ten schedule, even Chris Holtmann is a little surprised by the stretch Ohio State has put together.

The fourth-year coach of the Buckeyes knows how tough it is to win night-after-night in this loaded conference. Somehow, some way, the Buckeyes continue to find new ways to win games.

The latest example of that, a 73-65 road win at Maryland, featured the worst offensive night of the season for Holtmann’s leading scorer while another key offensive playmaker was held entirely scoreless. But it didn’t matter.

“I don’t think you can ever anticipate, in this league, winning whatever it’s been, six out of seven, seven out of eight, eight out of nine, whatever it’s been,” Holtmann said to reporters on Monday night. “I don’t think you ever anticipate that, and on top of that, I thought that we had a bit of a bumpy nonconference season. … A clean one nonetheless, but it was bumpy. I don’t mind admitting that I felt optimistic about this group, but I’m not also going to ignore the fact that there is some surprise in terms of [the fact] we’ve gelled in a quicker way.

What’s been written so far is about a team that now has proof it can win in any fashion, furthering the narrative that this Ohio State team has what it takes to win deep into March.

Ohio State beat Penn State two weeks ago despite turning the ball over 17 times and giving up 89 points. The Buckeyes went on the road and won a shootout last week over Iowa. They just won another road game despite E.J. Liddell scoring just seven points and Justice Sueing being shut out from the scoring column. The Buckeyes started slow and sloppy, but turned around the trajectory of the game Monday to pull out a win.

Every time they take the court, the Buckeyes seem to find a new way to win. 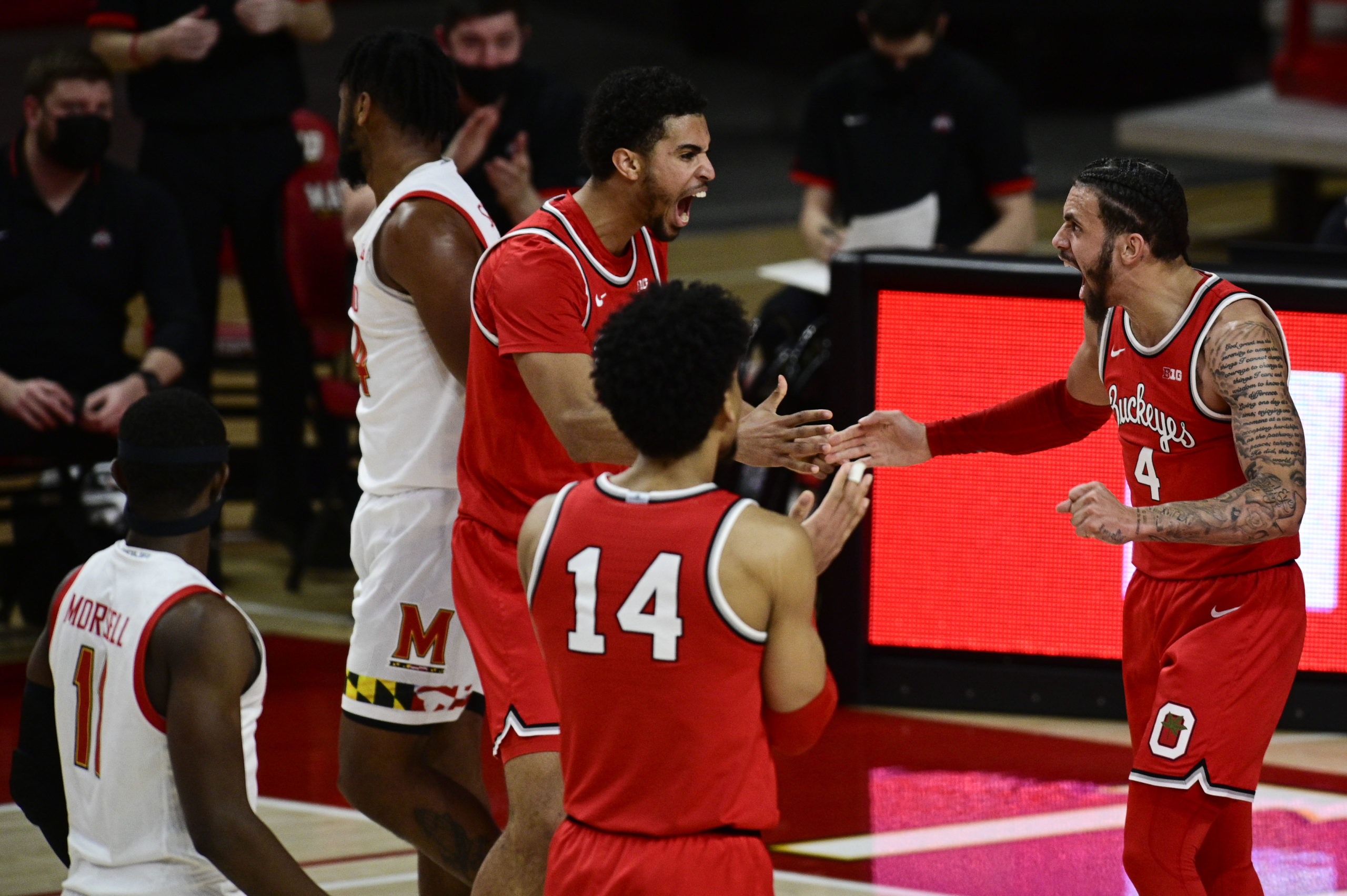 “I think that’s been the hallmark of this team, is multiple guys,” Holtmann said. “E.J. Liddell is such a matchup issue. He’s such a good player that teams are going to give him a lot of attention. The beneficiaries of that were some other guys [at Maryland]. I think for the most part, our guys were able to take advantage of it.”

Now at 16-4 overall and 10-4 in the Big Ten, Ohio State is knocking on the door of first place in the league. The Buckeyes will face the two teams ahead of them in the standings in the next three weeks, as well as another matchup with Iowa. This Ohio State team is 7-3 on the road, has nine quadrant one wins and has beaten five top-20 teams this season.

A No. 1 seed in the NCAA Tournament seems to be in the cards for the Buckeyes, who are one of the hottest teams in the country. And a deep tournament run could follow, because this team is still building confidence as it matures.

What helps continue to build that? Picking up the workload when top players are struggling. Senior forward Kyle Young had 16 points against Iowa last week. He had a career-high 18 against Maryland to lead the Buckeyes to another win. When one player is down, others rise. It seems to be the calling card of this Ohio State team.

“We take great pride in our ability to be versatile and do a lot of different things on the basketball court,” sharp-shooting senior guard Duane Washington said. “I think that’s why we’re playing some really good basketball right now. It’s hard to guard us. A thing that we do to balance out that advantage for the other team is take poor shots. We had a couple of them early, a couple of them in the second half as well.

“We’re still getting better, we’re grinding, we’re learning from it every single day.”

The No. 4 team in the country is still learning from each other and getting better. That sounds scary to a conference that is among the best in America, and the Buckeyes are near the top. As they continue to grow and learn, they’ll certainly keep winning games — and gaining confidence, something that is dangerous for a team as mature as this one.

“And then on top of that, the addition of some really good kids, good players, good people. In a year where you’re being challenged in a lot of ways, the quality of your team and their ability to focus, the maturity of your team, it’s essential. We have a mature team. I’ve said that from Day One.”

This mature Ohio State team continues to surprise Chris Holtmann with its string of wins.

If they stay on this same path, the Buckeyes will surprise plenty of others around the country with their many ways of winning games.