Ohio State is officially a victim of the madness March can bring.

The No. 2 seed Buckeyes were heavily favored and projected by many to advance late into the tournament. Oral Roberts had other plans.

The Buckeyes were stunned by the No. 15 seed Golden Eagle on Friday in a 75-72 shocking overtime final, the first major upset of this year’s Big Dance.

The loss marks just the ninth all-time by a No. 2 seed when facing a No. 15 seed. It’s the first time a No. 2 seed has been bounced out of the NCAA Tournament in the first round since 2016 when Michigan State fell to Middle Tennessee State. The loss is also the first time Ohio State coach Chris Holtmann has lost in the Round of 64 as a head coach.

Oral Roberts, the Summit League champion led by a bevy of 3-point shooters and the country’s leading scorer, shocked the Buckeyes and ended what was expected to be a deep and promising tournament run. Now the Buckeyes enter an offseason with plenty of disappointment and a sense of What If they could have snuck past the Golden Eagles.

Before the Buckeyes enter what should be an offseason full of intrigue, Lettermen Row is breaking down Three Points on how Oral Roberts stunned Ohio State in the NCAA Tournament.

Ohio State has relied on its offense all season, as its defense lagged well behind the other end of the floor in most metrics. But Friday afternoon, the Buckeyes struggled to generate enough offense to slide past the underdog Golden Eagles, who entered the tournament with one of the worst defenses in the field of 68. The Buckeyes hit just 22 percent of their 3-pointers and 43 percent of their shots overall. They turned the ball over 16 times. E.J. Liddell and Duane Washington Jr., the two leading scorers for Ohio State, combined for 41 points — but the rest of the offense just couldn’t score enough. Ohio State relied on its offense all season. But that wasn’t enough to avoid a shocking upset in the tournament. 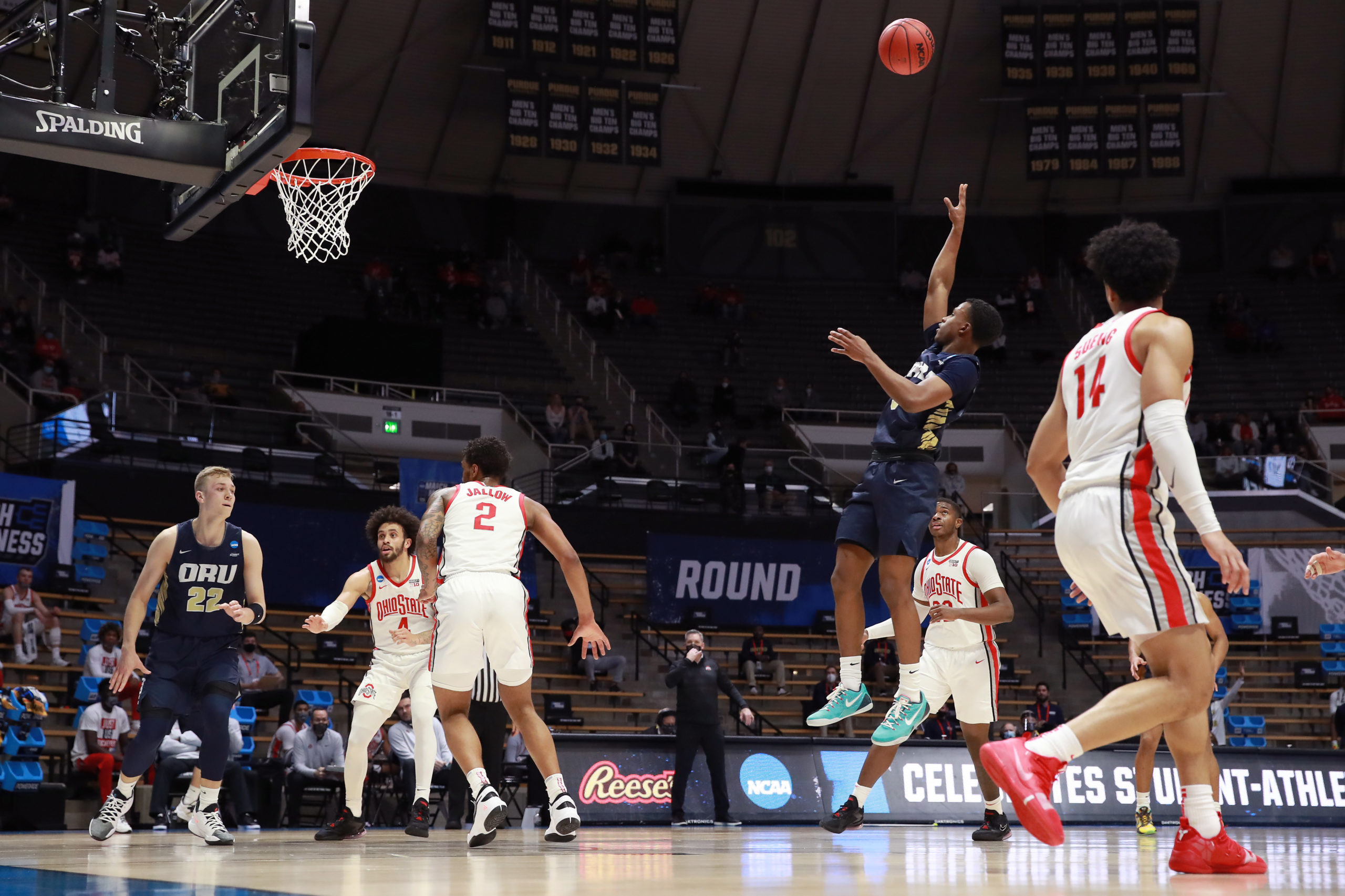 Ohio State knew it would see a challenge in the first round of the tournament. And when the Buckeyes drew a first-round matchup against the country’s leading scorer Max Abmas and Oral Roberts, the challenge became even more difficult. Buckeyes players and coaches mentioned before the game that Abmas was capable of shooting from anywhere on the floor and reminded them of an NBA scorer.

He proved them right. Abmas lit the Buckeyes up for 18 first-half points to scare the Buckeyes — and give the Golden Eagles a three-point halftime lead.Â Abmas finished with 29 points to sink the Buckeyes and help pull off one of the most shocking results in the early stages of the NCAA Tournament. Ohio State tried to defend the nation’s leading scorer. But the Buckeyes were unsuccessful, and they’re going home from the dance early because of it.

With the stunning loss to Oral Roberts in one of the biggest upsets of the NCAA Tournament, Ohio State now heads home with a crucial offseason upcoming. The Buckeyes will lose guard CJ Walker to graduation and could potentially lose key forward Kyle Young. But the Buckeyes will also welcome back a majority of their roster for next season; they’ll certainly enter next season as a ranked team with high expectations.

The loss t0 Oral Roberts, only the ninth all-time loss by a No. 2 seed to a No. 15 seed, in stunning upset fashion will sting Ohio State for a long time. But now the offseason is here for Chris Holtmann and the Buckeyes, who will begin work toward getting back to the Big Dance again next year.