COLUMBUS â€” For the first time since before Christmas, Ohio State walked off the court with a win.

The burden of a four-game losing streak has been lifted from Chris Holtmann’s team, and now, the Buckeyes can finally smile Tuesday night after a rough stretch that spanned nearly a month.

The offense looked competent again. Kyle Young looked like he’s back and healthy for a huge upcoming string of Big Ten games. The guard duo that Ohio State (12-5, 2-4 Big Ten) relies on took the game over. And the Buckeyes are back in the win column with an 80-68 win over Nebraska.

Yes, Nebraska is a struggling 7-10 team with a first-year head coach and a transitional roster, but the Huskers have good wins over Purdue and Iowa. Ohio State managed to fend off a tough first half and extend a lead through the second half to down Nebraska and earn a win before making a pivotal road trip to Penn State this weekend.

Before that can happen, Lettermen Row is breaking down Three Points from the first Ohio State win in nearly a month.

Just an hour and a half before tipoff, Ohio State announced coach Chris Holtmann suspended Luther Muhammad and Duane Washington Jr. for “failure to meet program standards and expectations.” The exact reason can be left to speculation, but the Buckeyes certainly missed two of their top guards. CJ Walker and DJ Carton had to pick up the bulk of the load for the Buckeyes, and they did it well. Holtmann was forced to dip deep into his bench and play walk-on guard Danny Hummer in the closing minutes of the first half, but Ohio State handled it well, and it weathered the suspensions two contributors. The absence of Muhammad and Washington Jr. could hurt the Buckeyes if they miss more time, but they were able to win without against Nebraska. 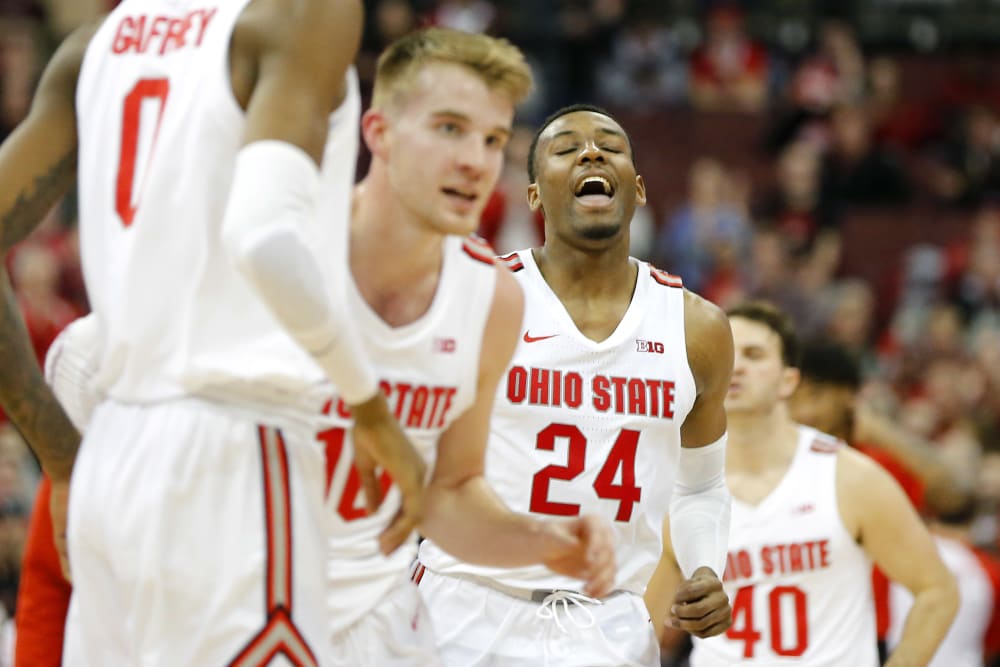 Ohio State had struggled offensively during its four-game losing streak. The Buckeyes didn’t score more than 60 points in any of the four games dating back to December, but that changed against the Cornhuskers. Following the suspension of the two guards, Holtmann dug into his bench and received a balanced scoring effort from the Buckeyes. Six different Buckeyes cracked double-figures; seven scored. Andre Wesson, Kyle Young, E.J. Liddell and other secondary scoring options joined in on the offensive output that lifted the Buckeyes out of their recent skid. Now, they’ll have to do it again Saturday at Penn State.

During the long losing streak, Carton and Walker didn’t play well — by their own standards — and they turned the ball over. The opposite happened against Nebraska. Carton played 38 minutes. Walker played 37. They did that while combining for 31 points, nine assists and just six turnovers. Walker had a season-high 18 points. Those numbers simply weren’t happening during the four-game slide, and the Buckeyes suffered because of it. There’s no easy way to put that much pressure on a freshman point guard in Carton, but Walker has played in huge games before. Even with the difference in experience, both will be called upon to carry the Buckeyes during stretches of Big Ten play — and into the NCAA Tournament. If they play the way they did against Nebraska, Ohio State’s chances of playing into March are better.