Have a question about Ohio State recruiting? This is the place for you. Check-in daily to see what’s on the mind of Buckeyes fans all over the country. Today we’re examining the top priorities in the Class of 2023 for Ryan Day and his program.

Biggest areas of concerns for 2022 and 2023 based on depth chart? I always lean on O Line especially the Coombs getting the DBs back in line.

As I wrote on Wednesday, today’s column is going to be about assessing the biggest needs for Ohio State in the Class of 2023.

Unlike the Class of 2022, it’s harder to get a true evaluation of the positional needs for the Buckeyes two years from now. We can objectively look at the current roster and make reasonable assumptions about what will be needed come December. Trying to do that two cycles ahead is always more difficult, but it’s made more challenging than ever as the landscape of college football changes seemingly every day.

The one-time, free-transfer rule opens the door for roster attrition unlike we’ve ever seen before. Throw in the unknown impact of Name, Image and Likeness legislation that has already arrived and its future iterations, and predicting future roster needs is a challenge.

So looking ahead to 2023, the biggest concern and need for Ohio State as I see it is with specific people — not specific positions. It’s much easier to see, even with only two years of high school football behind them, which kids have the chance to make the biggest impact on the Buckeyes 2023 recruiting class no matter what position they play.

That’s especially true because a couple of those dudes don’tÂ really have a position they play yet. They’re still growing into their frames and into the roles they’ll play in college. Sure, there’s always a need for a big-time quarterback and talented linemen. That’s obvious. 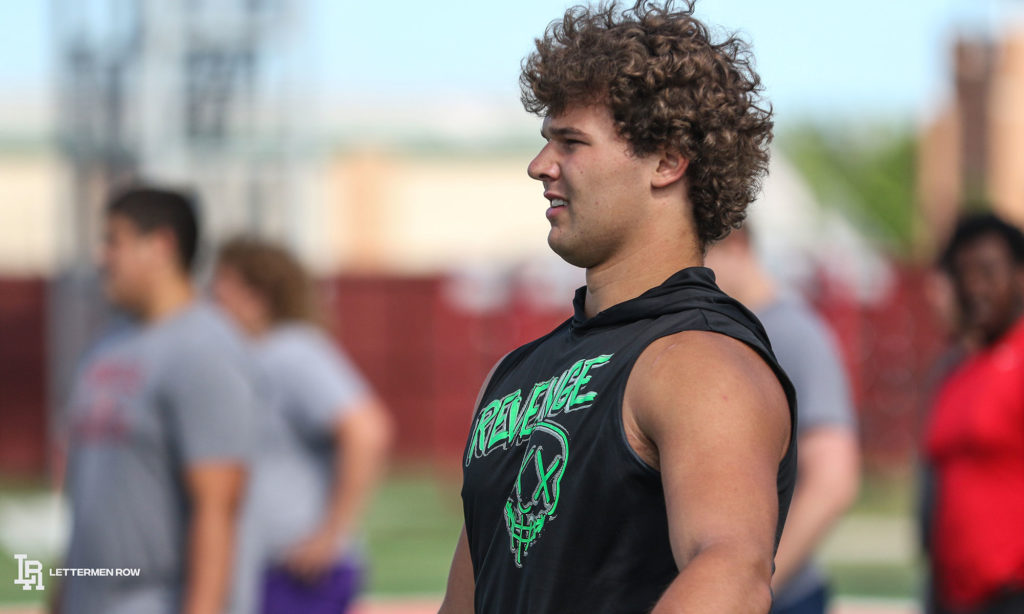 Luke Montgomery is the type of player that Ohio State can build a class around. (Birm/Lettermen Row)

Sonny Styles, no matter what position he plays, is a must-get recruit for Ohio State. Styles could be a linebacker or a safety, but where he plays is less important thanÂ where he plays. The Buckeyes know Styles is a leader on and off the field and have made him a priority because he’s the type of young person others want to line up with.

Luke Montgomery is the same way. The Findlay lineman isn’t sold on playing offense or defense but his connections all over the country make him an ideal prospect to build a program around. Montgomery is just tapping his athletic potential, but his social capital is well stocked. That’s important as peer-to-peer recruiting becomes a key part of the recruiting machine. A.J. Harris, the 5-star cornerback from the Alabama/Georgia state line or Richard Young, the country’s No. 1-ranked running back, could bust open the door to the Southeast and Florida.

The Buckeyes don’t have a 2023 prospect committed yet. The class will get going in the near future, but it’s vital for Ohio State to land a player that that inspires others to follow in their footsteps. Oklahoma, Notre Dame and others have picked up serious early momentum with big-time early verbal pledges.

Every position is going to be addressed in 2023, in every class. But at this point, which positions get Ohio State’s focus is far less important than the individual players.