A dozen wins. Seemingly nearly as many consistent contributors. And loads of momentum.

No. 13 Ohio State moved through the last of its non-conference schedule Saturday with a suffocating, 82-64 win against visiting High Point, improved to 12-1 and positioned itself to hunt elite postseason seeding when full-time conference action begins next Saturday at home against eighth-ranked Michigan State.

Continuing this staple of basketball coverage, here are Lettermen Row’s Three Points from the latest win for the Buckeyes, No. 37Â in 47 tries under Chris Holtmann.

This Buckeyes squad has no shortage of scoring options and also is long on players who fit their roles. But Luther Muhammad is continuing his emergence as not only the catalyst of this team, but as one of the premiere freshman point guards in college hoops.

The 6-foot-3, 185-pounder from Newark, N.J., ignited Ohio State early with his offense, built upon that with his defense and then established a new career-best scoring output with 14 points all in 16 minutes of first-half action.

Muhammad buried a trio of 3-pointers and also converted a savvy three-point play to initiate the gameâ€™s scoring. Heâ€™s playing 29 minutes per game on average and yet only is guilty of 17 turnovers through the first 13 games.

â€œWe needed a guy like that, thatâ€™s why we recruited him,â€ Holtmann said. â€œDonâ€™t discount his offense.â€

High Point deployed both two-three and hybrid three-two/one-two-two zones against the Buckeyes as it briefly catapulted in front courtesy of a 14-2 first-half run.

The Buckeyes were momentarily disjointed by the defensive looks and stopped playing inside-out through Kaleb Wesson, who didnâ€™t notch his first bucket until a 3-pointer nearly 15 minutes into the first half. 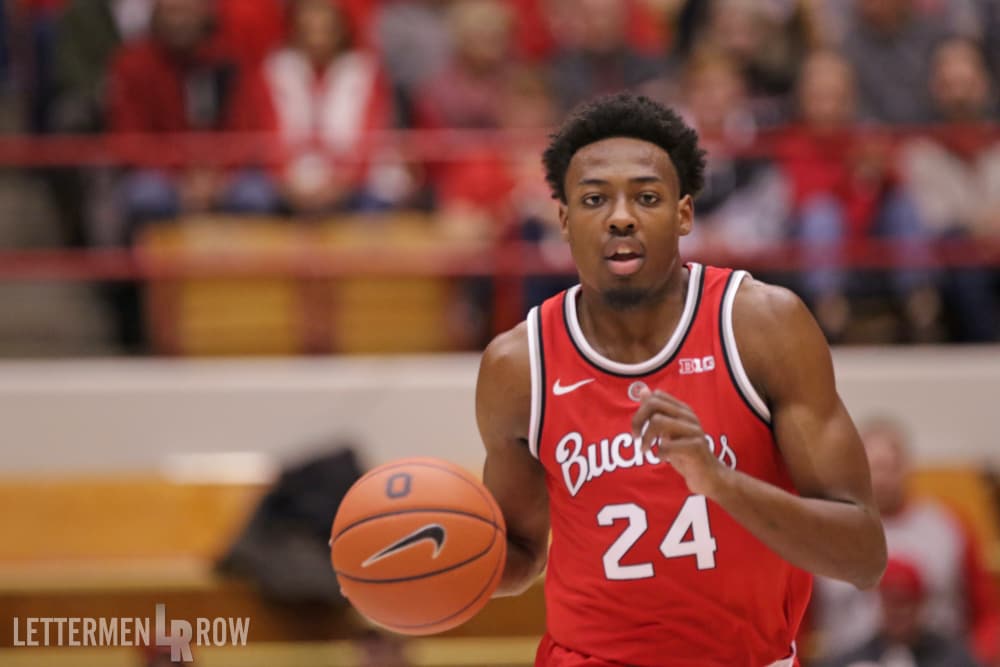 Andre Wesson can ball, too

But donâ€™t sleep on big brother. Andre Wesson is locked into a starting role moving into full-time league play, and heâ€™s playing the best basketball of his career. In playing 25 of the gameâ€™s first 27 minutes, Andre Wesson had amassed 10 points, eight rebounds and dished off three assists against zero turnovers. He finished with 10 points and nine boards in just 30 minutes on the floor as Holtmann substituted liberally across the gameâ€™s final minutes.

Keyshawn Woods continues a stretch of remarkably heady play, owning the second-most assists on the team and leading the backcourt with fewest turnovers. In proving he can distribute as well as score in the past two games, Wesson has a 7:1 assist-to-turnover ratio. â€¦ Kyle Youngâ€™s energy helps feed the entire Buckeyesâ€™ squad. The sophomore post who followed Holtmann to Columbus instead of Butler had a pair of resounding first-half blocks and a forceful baseline-jam off a Kaleb Wesson feed in the win against High Point. â€¦ Senior C.J. Jackson is kicking into fine form after a mini-slump in November. With team-high scoring honors in this contest, Jackson now boasts double-digit scoring efforts in seven of the Buckeyesâ€™ past eight games and enters January averaging 13.6 points per game.