They now are mired in the midst of their first-ever three-game losing streak under Holtmann courtesy Saturdayâ€™s 72-62 setback at Iowa.

A game that featured 13 lead changes and 10 ties saw the Hawkeyes progressively pull away and send the Buckeyes below .500 (2-3) in Big Ten play. They can try to break-even Friday when they host Maryland inside the Schottenstein Center at 6:30 p.m.

Here are Lettermen Row‘s Three Points after a third-straight defeat for Ohio State.

Ohio State killing itself with turnovers

A week ago in their conference loss at home to perennial power Michigan State, the Buckeyes committed just five turnovers.

In a pair of road tilts since that game, losses first at Rutgers and Saturday at Iowa, Ohio State combined for a gruesome 34 turnovers, including their season-worst in this contest.

The Buckeyes had 11 turnovers at the half and had eclipsed their season-high of 19 in a neutral-site game against Illinois last month when five minutes still remained in the game. Iowa did not initially take advantage of the careless possessions by the Buckeyes — but had tallied 18 points off 20 turnovers as it assumed command of the game.

Ohio State closed with 21 turnovers; it has committed 34 in its past two games. 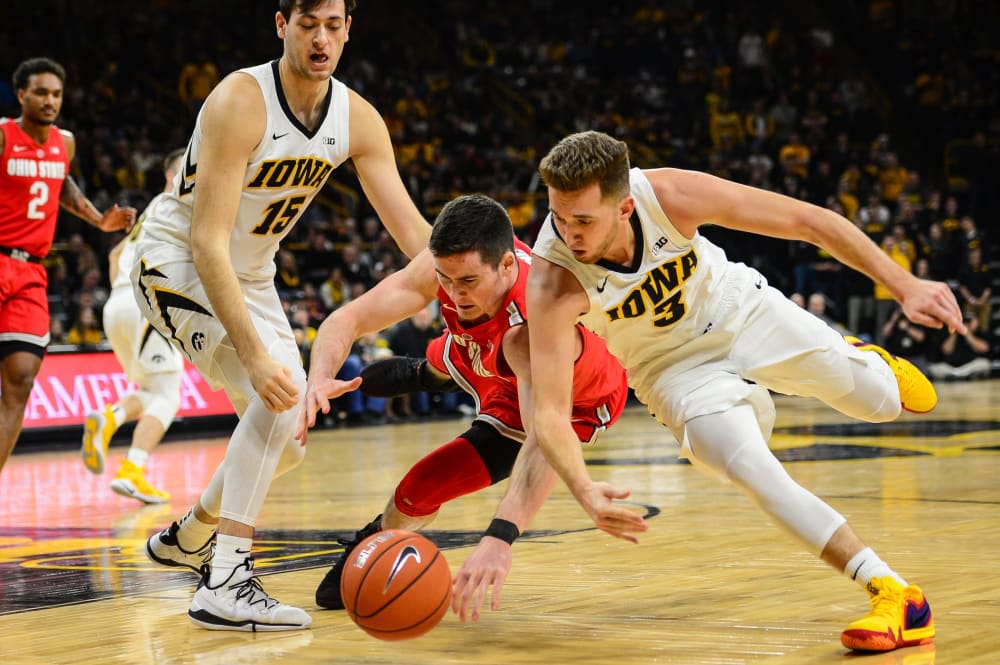 Ohio State came up short at Iowa amid a flurry of turnovers and fouls. (Jeffrey Becker/USA TODAY Sports)

As it climbed the rankings and piled up wins, Ohio State played sound defense, took care of the ball and did not beat itself.

In suffering their third loss in eight days, the Buckeyes had merely to look at their lax defense and propensity for fouls, in addition to their turnover woes. Ohio State had committed 20 fouls as well as 20 turnovers in the gameâ€™s first 35 minutes; they saw Kaleb Wesson pick up two fouls in less than the gameâ€™s first three minutes, and he never developed a rhythm in this affair.

The foul problems continued a troubling pattern that traces directly to the Buckeyesâ€™ losing skid; getting worked at the charity stripe. Entering the game having been outscored by a combined 22 points at the free-throw line in the Michigan State and Rutgers losses, the Buckeyes watched helplessly as Iowa pushed out that number to a 32-point deficit in its last three games.

Yes, Ohio State is limited in size but it needs Kaleb Wesson more involved and more drives to the basket in an effort to mitigate some of these lost points.

Iowa had a sizzling second-half stretch where it hit on eight of nine field goal attempts and also converted 11 of its first 14 free throws in the decisive final 20 minutes. The Hawkeyes also shot 15-for-27 (56 percent) from the floor in the second half.

With C.J. Jackson coming off the bench and not scoring until deep in the second half, Musa Jallow flashed some hustle and offensive skills as the Buckeyes actually managed a 26-24 halftime advantage.

Jallow hit a pair of early 3-pointers and also added four rebounds to go along with three steals. Jallow finished with eight points, and the Buckeyes also got some timely contributions off the bench from Justin Ahrens as Holtmann tried to find the right lineup combination.

Once again, however, the Buckeyes showed that they can be stymied if Kaleb Wesson is thwarted. Aside from Andre Wessonâ€™s team-best 13 points, Ohio State got a meager 17 points combined from the remainder of its starting lineup.