Ohio State had a chance to become the No. 1 team in the country just three weeks ago.

But after a loss to No. 12 Maryland in the XFINITY Center for their third straight loss, that shot at being the country’s best seems like an eternity ago.

No. 11 Ohio State dropped another game Tuesday night, a 67-55 loss to the Terrapins on the road to fall to just 1-3 in Big Ten play, giving the Buckeyes flashbacks to last season, when they didn’t win a game in January. Now, they are 0-2 this January, and it won’t get any easier in one of the toughest conferences in America.

The offense putted through the first half and continued into the second. Key players found themselves in foul trouble. The Buckeyes were held under 60 points for the third straight game — all losses. Nothing came easy for Chris Holtmann’s team, and now it must pick up the pieces and find a way to win at Indiana on Saturday afternoon.

Before the Buckeyes can do that, Lettermen Row is looking at Three Points from the latest Ohio State loss in the Big Ten, one the Buckeyes needed but couldn’t get.

Cold offense sticks around for Buckeyes

The Buckeyes couldn’t get anything going offensively in the first half, shooting just 31.3 percent from the floor and 3 of 13 from 3-point range. That’s been a theme in the last two games, and it seemed to continue at Maryland. D.J. Carton was the lone bright spot for the Buckeyes, and he seems to be out of his funk. The rest of the Buckeyes just couldn’t knock down shots.

The second half was just a little better, and it couldn’t help them come back to beat a top-15 team on the road. Ohio State shot just 31.3 percent from the floor for the game, a sign that the offensive lull is still around, and it doesn’t seem to be leaving.

Chris Holtmann went deep into his bench to try fixing the issues, playing nine guys in the first half alone, but that didn’t fix anything. Ohio State only had six fast-break points despite playing with guards. The absence of Kyle Young has hurt the Buckeyes, although he doesn’t score at a high level. Even without Young, Ohio State managed to scoop up 16 offensive rebounds, some because of poor shooting. But it only had 10 second-chance points, showing the hard times the Buckeyes have fallen on at the offensive end of the floor. 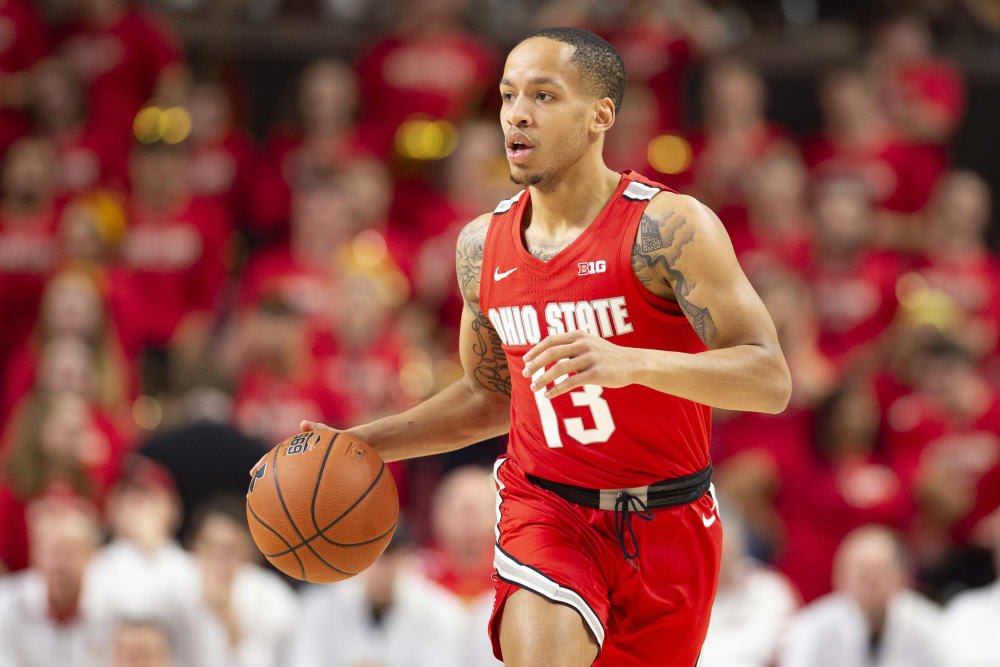 CJ Walker was in foul trouble for parts of the second half. (Tommy Gilligan/USA TODAY Sports)

Ohio State didn’t play terrible defense. The Terps had 11 first-half turnovers and 15 for the game, but they overcame those to beat the Buckeyes. Maryland had that many turnovers against a conference opponent at home and still found ways to win. That’s the funk the Buckeyes are in right now.

Even with all the turnovers, the Terrapins were able to find buckets easier than the Buckeyes, which was hard to do. It helped that Kaleb Wesson and CJ Walker both sat through — and played through — foul trouble for the middle part of the second half.

Holtmann has built his program with the promise of good defense. The Buckeyes played it Tuesday night, but it didn’t matter, because the offense can’t seem to do anything.

Last season, Ohio State beat quality teams in the nonconference, then went into February on the NCAA Tournament bubble because it didn’t win a single game in January. This season is trending toward that again. What do the Buckeyes need to do to avoid that? Getting Young back would be big for Chris Holtmann and the Buckeyes. Young went through shoot-around at Maryland, but couldn’t play after sustaining an appendectomy more than a week ago.

As the Buckeyes hit the road again this weekend for a tough conference game at Indiana, theyâ€™ll look to end their current three-game slide. Saturday’s game will be massive for the rest of Ohio State’s season, and it needs to win to keep pace in the Big Ten race moving forward.