Another game, another second half full of drama for Ohio State.

For the second straight game in the Big Ten Tournament, the Buckeyes allowed a huge second-half lead dwindle away. And for the second-straight game, Ohio State survived and advanced.

The Buckeyes lost to Purdue in January and again in February. But not in March. In the third matchup of the season, the Buckeyes built a massive first-half lead Friday, let it slip away but hung on for a 87-78 overtime victory over the Boilermakers inside Lucas Oil Stadium to advance to the Big Ten semifinal, where they’ll meet rival Michigan.

Forward Kyle Young scored 18 first-half points to lead the Buckeyes before being injured with what appeared to be a head injury early in the second half. From there, the Buckeyes began to see their huge lead slowly slip away from them as they had just three made field goals in the final 15 minutes of regulation. Once the game went into overtime, Ohio State found its footing again.

The Buckeyes pulled out a win thanks to Young’s performance, typical performances from stars E.J. Liddell (17 points) and Duane Washington (20 points) and 12 points from forward Seth Towns, six of which came in overtime.

Ohio State can now turn its full attention to a highly-anticipated rematch with Michigan, which beat the Buckeyes in one of the best games of the college basketball season in February. This game against the Wolverines, which is set for Saturday at 1 p.m. on CBS, will be for a spot in the Big Ten Tournament title game.

But before the Buckeyes can turn their full attention to the semifinal matchup with their rival, Lettermen Row is breaking down Three Points on how Ohio State narrowly advanced past Purdue.

Ohio State began the second half with an 18-point lead and looked to be in control of the quarterfinal. But then the second half unfolded. The Buckeyes went more than eight minutes without a field goal and slowly allowed Purdue to creep back into the game. The Boilermakers chipped away and nearly completed the comeback late, forcing overtime. Ohio State’s latest second-half collapse almost cost the Buckeyes a shot at a rematch with Michigan, and it is certainly a trend that continues to show back up late in games.

If Ohio State is going to make a run in the NCAA Tournament, it has to find ways to put teams away once it gets a lead. The Buckeyes were able to hang on for a big win to advance, but they must be better in the second half to win in March. 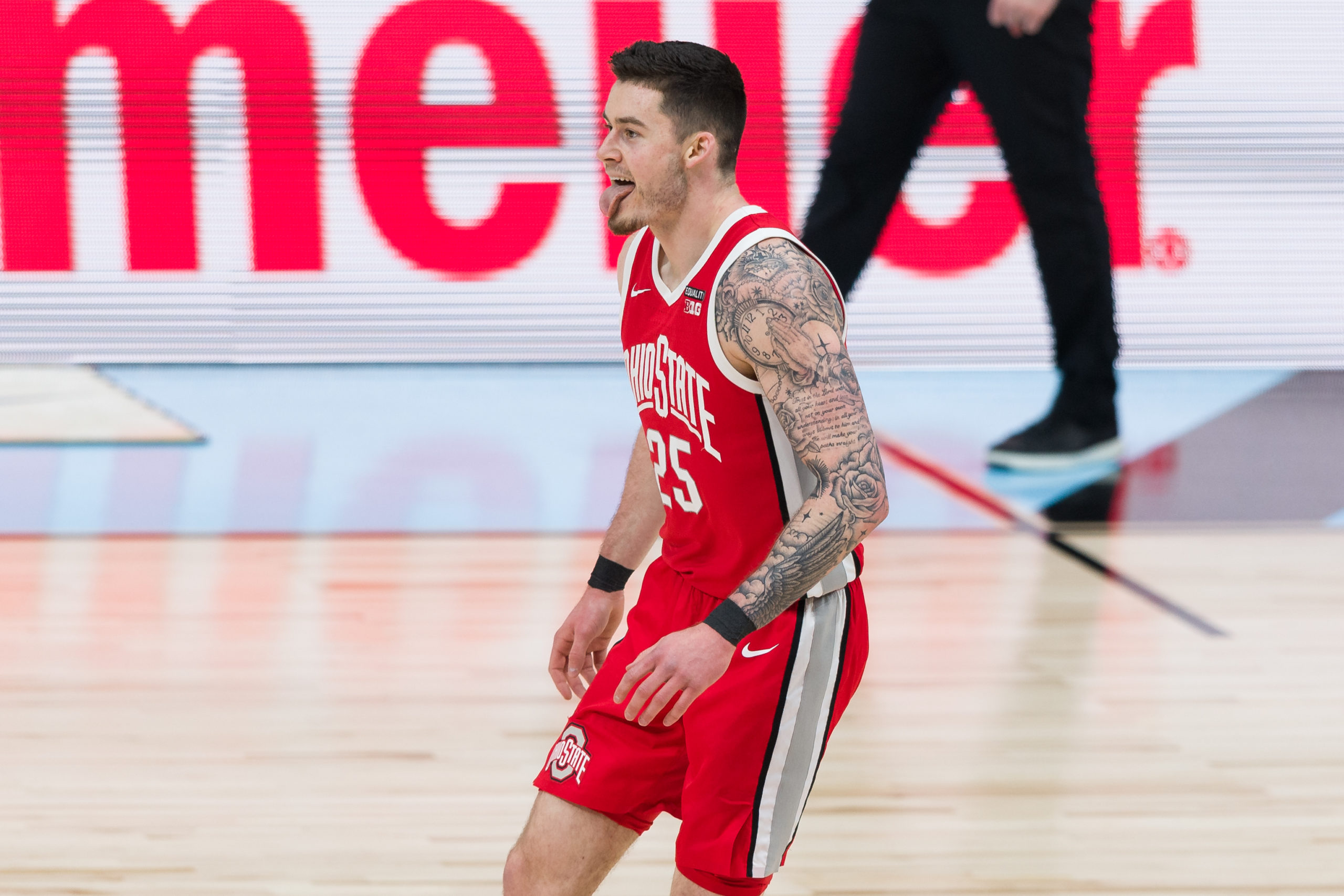 Kyle Young led the Buckeyes with 18 points in the first half. (Zach Bolinger/Icon Sportswire via Getty Images)

Kyle Young has given Ohio State a spark at different points this season. When the Buckeyes needed one to open the quarterfinal against Purdue, Young delivered one of his best games of his career. Young tied his career high with 18 points — in the first half. He scored 11 of the Buckeyes first 15 points and knocked down four 3-pointers in the opening 20 minutes to give the Buckeyes an 18-point halftime lead. Young took a hit to the head early in the second half and did not return, but his impressive first half helped. Ohio State needed an unsung hero to step up and provide a boost to advance past Purdue and into the semifinal. Kyle Young did just that in a big way despite being injured, and the Buckeyes advanced.

Ohio State has officially earned a rematch with top-seeded Michigan after holding off Purdue. After the Buckeyes and Wolverines met in a close, down-to-the-wire game that Michigan won by five in late February, Ohio State guard Duane Washington made sure to point out the rematch was a welcomed possibility.

Now that the Buckeyes are past a Purdue team that had beaten them twice in the regular season, they can turn their attention to earning some revenge by knocking Michigan out of the conference tournament. Ohio State will need to play its best basketball to find a way to beat the Wolverines on Saturday afternoon. But if it plays like it did when it took down Purdue on Friday, it certainly has a chance against its biggest rival.