No off nights. Not in Big Ten play and especially not on the road.

Ohio State found out this much in its first loss away from home of the season Wednesday night at Rutgers.

What went wrong and what allowed the middle-of-the-pack Scarlet Knights to upend the nationâ€™s No. 16 team?

Get a look at the keys to the game in Lettermen Rowâ€™s Three Points from a lackluster, 64-61 road loss.

Too many handouts for Ohio State to overcome

Once again, it was a similar situation in this contest that featured both inconsistently ticky-tack foul calls and unabated rough-and-tumble play.

Regardless, the Buckeyes were on the short end of the free-throw stick. Rutgers had a 20-9 edge on charity tosses going into the gameâ€™s final four minutes, when the host held a 58-55 lead that it had maintained since breaking a 40-all tie early in the second half.Â Rutgers finished 15 for 20 at the stripe while OSU managed just seven of 11 tosses. And in the last two games, the Buckeyes have beenÂ outscored 45-23 at the stripe in the back-to-back losses. 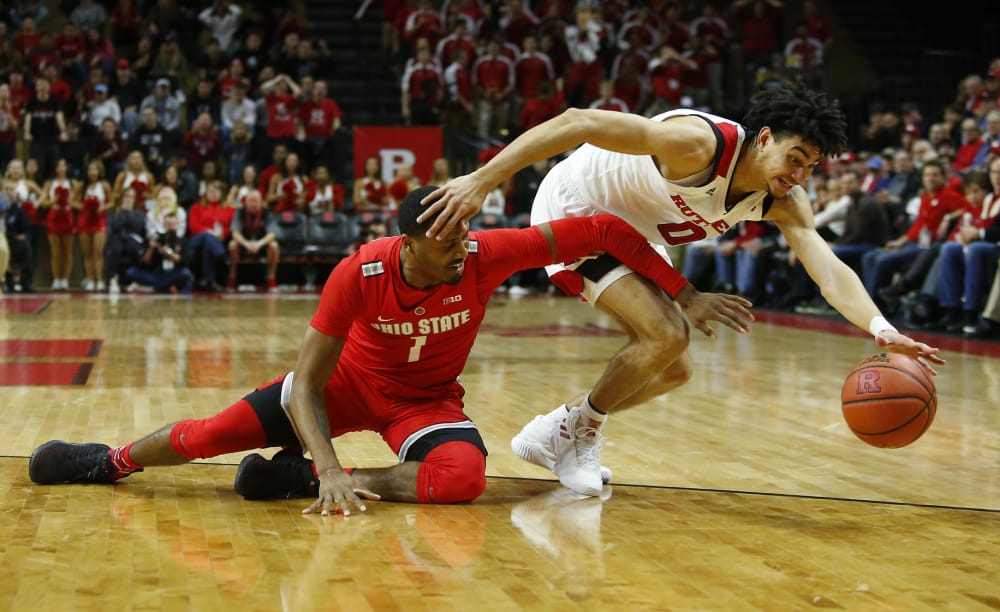 Buckeyes should get ready for more zone

Rutgersâ€™ two-three zone consistently frustrated and coerced poor shot selection from the Buckeyes, who only briefly flashed any sort of offensive rhythm in the first or second half of this road loss.

Ohio State did not adequately work its game into an inside-out set against the zone, and be it foul trouble or the Scarlet Knightsâ€™ sagging defense, did not feed Kaleb Wesson with enough touches.

The result was meager eight-for-26 shooting from 3-point territory and an ugly 23-for-58 overall effort from the floor, less than 40 percent.Â Rutgers, on the other hand, shot almost 50 percent in the second half — 12 for 26 — and finished the game at 22 of 53.

That, coupled with Ohio State’s 13 turnovers against just 10 for the Scarlet Knights, doomed the road outing.

Luther Muhammad was very strong in his return home, particularly on the offensive end of the floor. The freshman from New Jersey finished with 13 points to lead the Buckeyesâ€™ backcourt-scoring, and he also grabbed six boards against three turnovers in 33 minutes on the court.Â Kaleb Wesson overcame his sluggish first half to post a game-high 18 points in just 27 minutes.Â C.J. Jackson rounded out the trio of double-digit Buckeyes with 10 points.

But the remainder of the Ohio State starters and bench players contributed a mere 20 points in a combined 105 minutes on the floor.

As good as Kaleb Wesson is, and he has few peers in the Big Ten or anywhere right now in college basketball in terms of capability to shoulder the interior load, the Buckeyes must get more consistent production from its surrounding cast.