COLUMBUS â€“ Too many misses. Too many fouls. Too much of everything that Ohio State had not been through its first six games.

And now the 16th-ranked Buckeyes are no longer undefeated. Erratic shooting and inconsistent defense left Ohio State a 72-62 loser at home to the unranked Orange on Wednesday night, who got a combined 52 points from Tyus Battle, Oshae Brissett and Frank Howard.

The postgame coverage at Lettermen Row for the first defeat of the season for the Buckeyes starts with Three Points.

1. Too many droughts for Buckeyes

Even as it constructed a consistent first-half lead, Ohio State got itself in trouble repeatedly as it was lulled into rushed shots, contested shots, hurried and errant passes and more by the Syracuse defense. The result saw Ohio State hit seven of its first 14 field goal attempts and then just five of the next 23 as Syracuse unfurled an 11-0, second-half run to seize control of the contest.

The Buckeyes were just 3-for-15 across the first 12 minutes of the second half but made enough trips to the foul line to even briefly lead, 45-44, before the Orange run.

Ohio State also continued its recent slide behind the 3-point line, where it connected on four early attempts against Syracuse but finished the game just 6-for-22 from distance.

As it helplessly watched the Orange pull away too far, Ohio State endured an eight-minute field-goal drought through the crucial juncture of the second half.

Size isnâ€™t suddenly going to change for the Buckeyes to begin getting easier buckets along the interior. They need contested jumpers and more threes to continue their surprising surge into the national rankings. 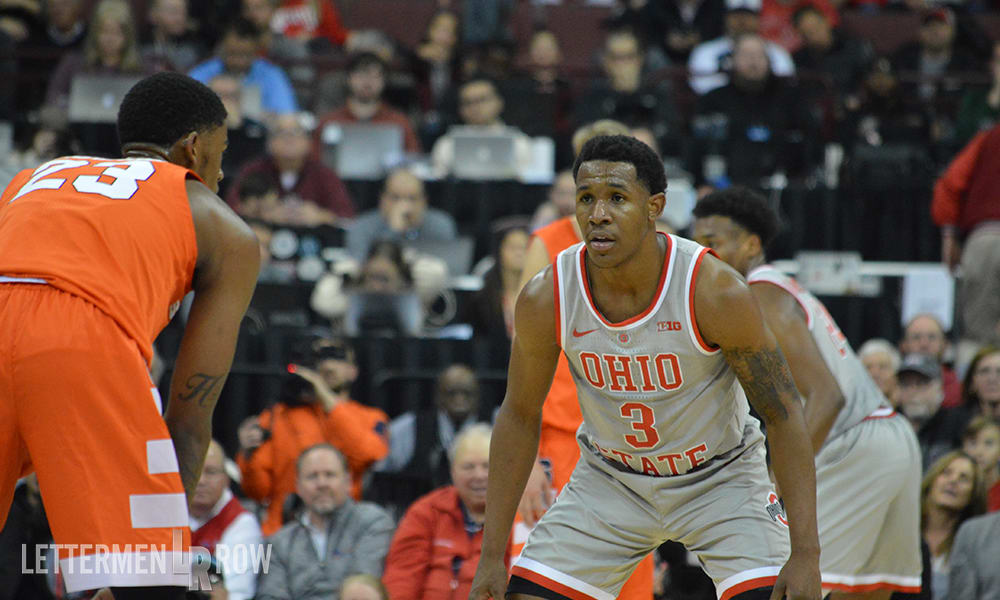 2. Ohio State got to the line plenty

Syracuseâ€™s Bourama Sidibe fouled out in a mere 12 minutes of floor time. Soon thereafter, the Buckeyes induced a fifth foul from problematic forward Marek Dolezaj after 25 minutes on the court. Point guard Frank Howard also picked up his fourth foul when the gameâ€™s outcome remained in doubt and fouled out with 4:27 left on the clock.

But Ohio State faced its own foul problems, most notably as both Andre and Kaleb Wesson were saddled with four while the Buckeyes tried to rally, and they missed far too many free throws — especially on a night when floor-shooting was erratic.

Ohio State hit just nine of 14 first-half charity tosses; they finished the game hitting on 26 of 35 attempts — but the margin of error was too narrow to accept some of those misses.

Arguably college basketballâ€™s toughest defense and easily the longest team the Buckeyes thus far have faced were not problematic for freshman point guard Luther Muhammad, who shined on both ends of the floor in the effort.

Muhammad barely left the court in the first half as Ohio State built as much as a seven-point lead on multiple occasions. And it was not the same team without Muhammad, who had four points and five assists, a plus-minus rating of plus-11 in 16 minutes of opening-half floor time.

There is a bit of cause for concern with the young guard, though, since Muhammad dislocated his shoulder late in the game. Ohio State coach Chris Holtmann didn’t immediately have an update on Muhammad’s status moving forward, but that will be watched closely with the program set for its Big Ten opener on Sunday against Minnesota.