Have a question about Ohio State recruiting? This is the place for you, five days a week. Submit your questions on Twitter or on the Lettermen Row forums. Check-in daily to see what’s on the mind of Buckeyes fans all over the country. Tuesday’s question asks about the defensive line recruiting haul for 2020 and who could fill the last remaining spot.

Since it feels like Ohio State has an uphill battle to land Tyler Baron in the 2020 recruiting class, who do you see Ohio State adding to the defensive line yet this cycle?

There isn’t a lot of momentum for Ohio State right now when it comes to the recruitment of Tyler Baron, the 4-star defensive end from Knoxville (Tenn.) Catholic High School. But that doesn’t mean the Buckeyes are giving up that pursuit. Quite the contrary, actually, because there’s been nothing close to a concession when it comes to Baron’s recruitment even though the general belief is that Tennessee has done enough to keep him home.

But if Baron does what is expected and picks Tennessee, the question of where do the Buckeyes turn at defensive end as they look to supplement a haul of Darrion Henry, Ty Hamilton and Jacolbe Cowan is an important one, for sure. Baron has been the most likely option for the last few months, but he’s not been alone on that list though it is very limited.

The goal is to find an edge rusher to join the 2020 recruiting class. And for the most part, it’s not a particularly deep position group in this cycle. That’s one of the reasons why I was surprised there wasn’t more done to maintain the relationship with Pittsburgh commit Dayon Hayes after Larry Johnson offered him over the summer. Whatever the reason, Johnson and his recruiting approach are well-documented. He’s methodical, patient and not the type of coach who is going to freak out even if he appears to be struggling to find the right fit on the recruiting trail.

There’s a good reason for that: The athletes at Ohio State aren’t even close to complete in their development, and sometimes those guys that are already on campus may be the best answer to a recruiting conundrum. 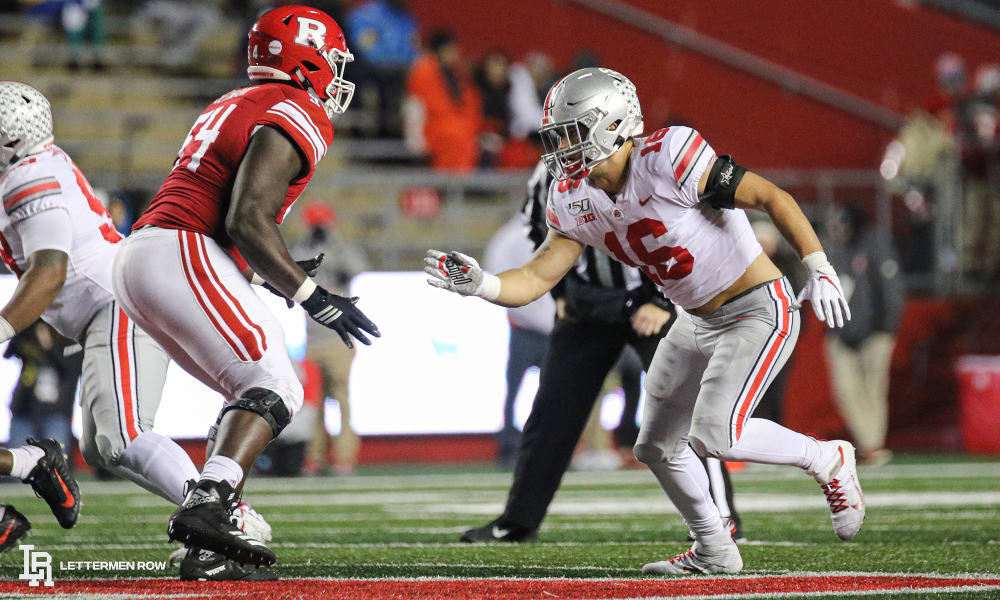 That’s where Cade Stover comes in, potentially. A 6-foot-5 freak of an athlete, Stover played safety the majority of the time he was on the field for Lexington High School and used his size and speed combination to essentially be an eraser for the Minutemen defense. Even before he arrived at Ohio State at almost 235 pounds, the first-year linebacker prospect knew there was a chance his body would take him a different direction.

â€I personally see myself being 255 or 260 pounds,” Stover told Lettermen Row in the summer of 2018. “Thatâ€™s just naturally what my body is going to do. Thatâ€™s what my dad did, and thatâ€™s what Iâ€™m built for. Whatever suits the team, wherever I fit, Iâ€™m personally fine with either one.”

After practicing at linebacker for months, things have changed for Stover — the new direction is the defensive line. He has worked at the position for a few weeks now and played exclusively with his hand in the ground against Rutgers. That game in New Jersey was his fourth game of the year and is likely to be the final one he’ll play this season for Ohio State, which would allow him to redshirt and return as second-year freshman next season, meaning that he’ll have a full year to grow under Larry Johnson’s tutelage while he grows his body to the dimensions he figured were coming anyway.

Does Stover being moved to the defensive line mean the Buckeyes aren’t going to sign another lineman in 2020? Not at all, but it does give some flexibility to a recruiting class that has only a few spots left and a number of potential outcomes for them.