COLUMBUS — Ohio State has made nearly every College Football Playoff since its creation in 2014.

The path to making the CFP could potentially be easier as soon as 2023.

The new format would feature the six highest-ranked conference champions along with six at-large spots. The top-four champions would receive a first-round bye, while the other eight teams would meet in first-round games on campuses of the higher-ranked teams. Bowl games would host the quarters and semis.

The semis would be held on either Jan. 1 or Jan. 2, depending ifÂ New Yearâ€™s Day falls on a Sunday. Rematches wouldn’t be factored into rankings and the bracket would hold throughout the playoff.

“No conference would qualify automatically and there would be no limit on the number of participants from a conference,” the CFPÂ  recommendation stated in a release.

The proposal is only in its early stages. Swarbrick and the 10 FBS commissioners that make up the CFP Management Committee are set to meet next week in Chicago, where the new model could start to be aired out. 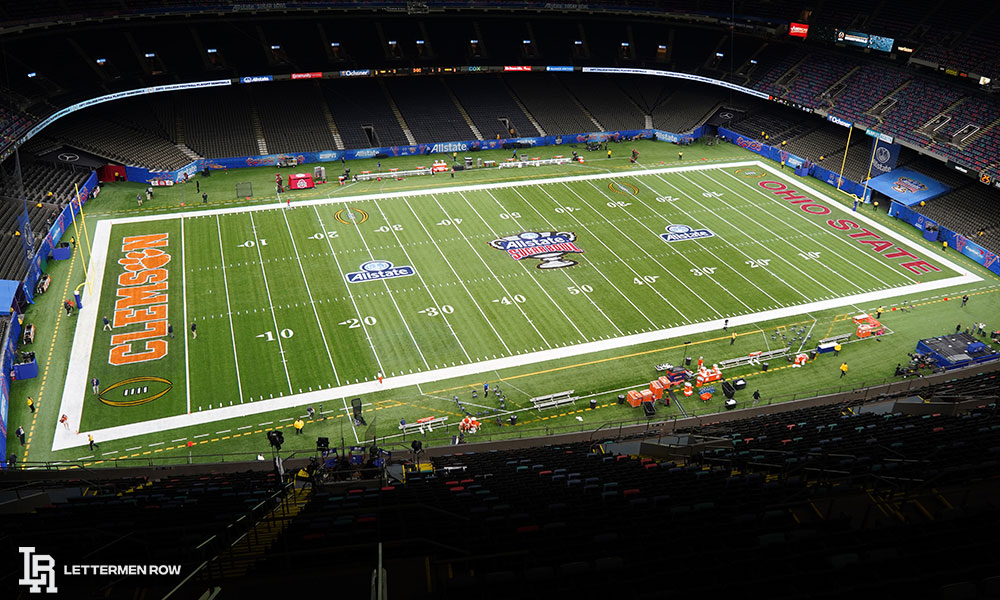 Ohio State has made four appearances in the CFP. (Spencer Holbrook/Lettermen Row)

The current 12-year College Football Playoff contract with ESPN runs through the 2025-26 season. A 12-team model would provide teams in the Group of Five a real shot at competing for the national championship and a path to the postseason.

Ohio State has been to the playoff four times, including two-consecutive playoff appearances. The Buckeyes advanced to the national championship last season, ultimately falling to Alabama. Ohio State won the inaugural CFP title in 2015 with wins over Alabama and Oregon. With the proposed expansion, Ohio State would have made the CFP in every year of its existence.

If the revamped playoff comes to reality, it would reshape the landscape of college football. Conference championships would hold value, but the quality of nonconference games could set teams up for success in attaining at-large bids.

It would also shift Ohio State’s goals. The Buckeyes always want to contend for a national championship, but just making the playoff in its current four-team model is a challenge. Moving to 12 teams would change the importance. No longer would it beÂ ifÂ the Buckeyes could make the CFP butÂ how farÂ they could go.

Those questions could soon become reality.