The summer offseason is in full swing, and Lettermen Row is trying to survive it with our annual Position Week breakdowns. By the time all nine units at Ohio State have been covered, training camp and media days will nearly have arrived â€” and the return of football in the Horseshoe will be just around the corner. Letâ€™s continue Defensive Backs Week by projecting the depth chart at cornerback for the Buckeyes.

The Buckeyes, who still carry the Best In America mantra, might have the most talented cornerback assembly line in college football. But that didn’t produce on-field results last season. Ohio State had the No. 122 pass defense in the country and struggled with injuries and attrition on the outside of the defense.

Now with Shaun Wade in the NFL, Sevyn Banks emerging as a star, Cameron Brown back from injury sustained last year and a youth movement behind them, the cornerback position provides plenty of intrigue as training camp nears.

â€œCornerback is a unique position,â€ Ohio State coach Ryan DayÂ saidÂ this spring. â€œYou have to bring it every play, and you have to have a short memory. Those guys are all competing at it, and theyâ€™re growing, theyâ€™re getting better. Theyâ€™re given a good dayâ€™s work every day.

â€œAs long as they keep stacking those days, theyâ€™re going to continue to get better.â€

Ohio State has options at cornerback. And while Banks has emerged as the next in line of a historically great cornerbacks the program has sent to the NFL, there are uncertainties behind him. Who will break through and help the Buckeyes return to their glory in the secondary? Lettermen Row is analyzing and projecting the Ohio State depth chart at cornerback.

Sevyn Banks: As the season went on last year, Sevyn Banks began to emerge as the top cornerback for Ohio State. Banks gained experience by starting opposite of Shaun Wade last year when the Buckeyes secondary was at a historic low. And although there were growing pains, Banks showed he can be an elite cover cornerback. Banks is emerging on NFL draft boards as a potential first-round pick next spring. He can solidify himself in that conversation with a strong final Ohio State season, locking down one side of the field like the first-round Ohio State cornerbacks before him did.

Cameron Brown: Last year was slated to be a huge breakout chance for Cameron Brown, but he tore his Achilles in the second game of the campaign. Brown went through his rehab and appears to be healthy again, ready for a second opportunity to show he’s elite. Brown has the skills necessary to shut down opposing wide receivers when he’s healthy. If he can prove he has fully recovered from the setback last season, he’ll be a starter for the Buckeyes — and an experienced option at cornerback. 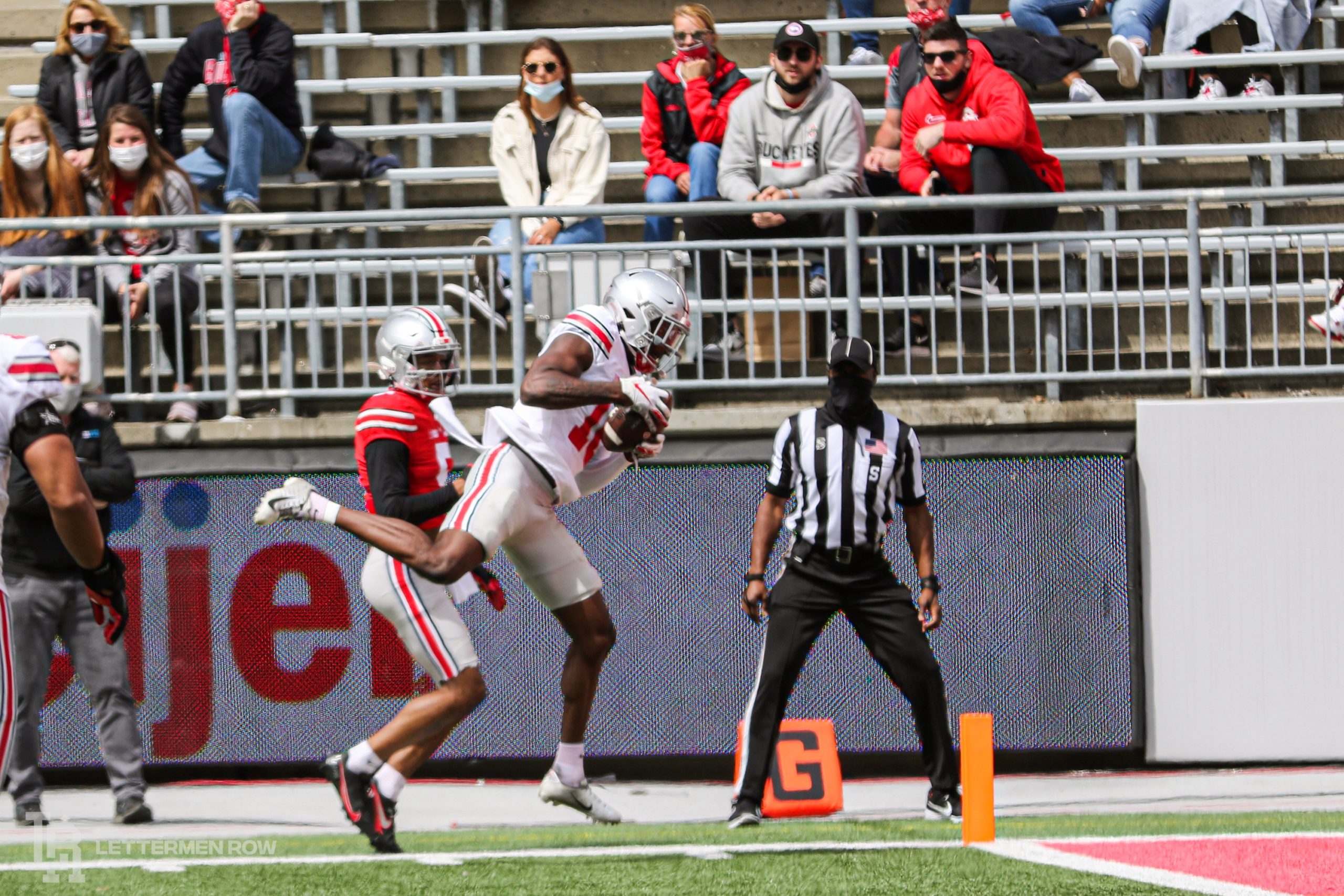 Ryan Watts picked off a pass in the Spring Game. (Birm/Lettermen Row)

Ryan Watts: Kerry Coombs used a three-man starting rotation at cornerback during his first stint at Ohio State, and Ryan Watts may force Coombs to do it again this fall. Watts has the size, speed and range to be the perfect cornerback in a Coombs defense, making him a prime candidate to be the third cornerback in the rotation with Banks and Brown. An interception in the spring game and an impressive spring overall propelled Watts into the conversation. Now he has a chance to stay in the starting spot and shine — and begin to build as the next elite cornerback to come out of Ohio State.

In cornerbacks mix for Buckeyes

Lejond Cavazos:Â Another second-year cornerback, Lejond Cavazos continues to develop for Ohio State. He might be stuck behind the top three cornerbacks in the room this season on the outside, but as he gains experience, Cavazos could be in line for a huge role in the 2022 version of the Ohio State defense. And if there’s an injury in the secondary — like the Buckeyes had last year — Cavazos could be called upon to become a major factor at the position. He is a solid backup at cornerback for Kerry Coombs and the Ohio State defense.

Marcus Williamson:Â A fifth-year senior, Marcus Williamson used the extra year of eligibility granted by the NCAA after last season to return for the Buckeyes, bolstering their depth. Williamson has never been able to make a huge impact on the Buckeyes defense, but as a slot cornerback this fall, he could finally find his role. Williamson won’t play outside, and he won’t play safety. He has experience as a veteran and could lock up a spot as the nickel cornerback if he proves capable in camp. But Cameron Martinez continues to improve, making that a position battle worth monitoring. 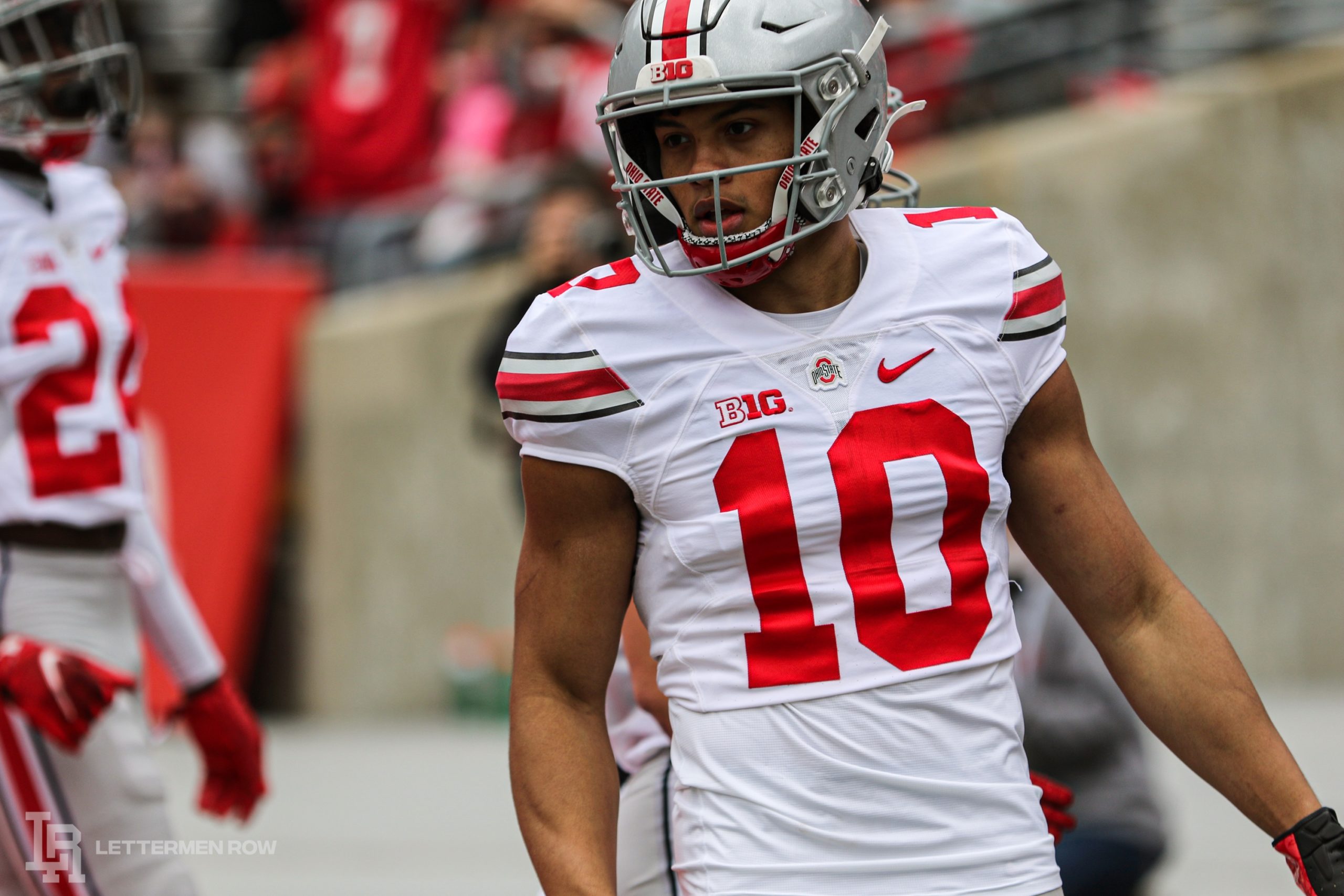 Cameron Martinez is one of a few young Buckeyes who earned reps this spring. (Birm/Lettermen Row)

Cameron Martinez:Â If Williamson isn’t the answer at slot cornerback in a nickel package, second-year cornerback Cameron Martinez might be. Martinez showed in small sample size that he can play at a high level last season, and he continued to build on that in his first spring on campus in March and April. He drew praise from coaches and made plays throughout the 15 practices. Can he make a push and leap the fifth-year Williamson as the guy in the nickel cornerback role? He certainly has a chance to do so, as the Buckeyes secondary undergoes a youth movement.

Jordan Hancock,Â Jakailin Johnson: Two top-100 prospects from the Buckeyes loaded class of 2021, Jordan Hancock and Jakailin Johnson were neither one on campus for spring practice, and they just arrived in June. But they will immediately enter the mix at cornerback for Ohio State. Both are talented and possess every skill Ohio State looks for in its cornerbacks. Can they pick up the system and become ready for college football action in a short time frame? If yes, they both have a chance to make an impact in their first season on campus.

Demario McCall:Â The senior enters his final season of a tumultuous Buckeyes career with a position change. Demario McCall is moving to cornerback after playing on the offensive side of the ball for four years. McCall struggled in the spring game against the top targets for the Buckeyes, but he does possess the athleticism to play defensive back. Can he learn quickly and find a way onto the field in the secondary?

Denzel Burke:Â Burke was listed as an athlete on his recruiting profile, but the Buckeyes recruited him to be a cornerback. He began showing why in the spring. He is athletic and can make plays in the secondary, making him an intriguing player to watch over the next couple of years. Can he surprise and make an impact as a freshman? That might be a tough ask, but he certainly will bolster the secondary depth and become a factor down the road at cornerback.