The summer offseason is in full swing, and Lettermen Row is trying to survive it with our annual Position Week breakdowns. By the time all nine units at Ohio State have been covered, training camp and media days will nearly have arrived â€” and the return of football in the Horseshoe will be just around the corner. Letâ€™s continue Linebackers Week by projecting the depth chart for the Buckeyes.

The Buckeyes will need to replace all four starting linebackers from a season ago. Justin Hilliard is with the San Francisco 49ers. Baron Browning went to the Denver Broncos. Second-round pick Pete Werner is in New Orleans. Tuf Borland is with the Minnesota Vikings.

Al Washington and the Buckeyes must replace nearly all of their linebacker production from the last two seasons. That won’t be an easy task. But the talent assembled in the room to do just that is great. Ohio State has a chance to reload, not rebuild, while maintaining a championship-level unit.

â€œIt is a great challenge in a lot of ways,â€ Washington said during the spring. â€œBut in the same breath, this is the evolution of football — especially in college. This is why they come to Ohio State. This is what itâ€™s about. The next guy is up. Take advantage of your opportunity. Believe in yourself. Compete. Every day identify the things you need to improve on. Thatâ€™s been our message: Hey, weâ€™ve got to be fully conscious every day, and weâ€™ve got to be really hard on ourselves. We have to be focused on how we can improve, and over time weâ€™ll get better.

“Our standard is our standard, and the next guy is up. Weâ€™ve got to uphold that standard.â€

Ohio State certainly has the talent to uphold that standard inside the linebackers room. Who will start? Who can carve out a role? Lettermen Row is continuing Linebackers Week with a look at what the depth chart could potentially look like this fall.

Teradja Mitchell:Â The No. 2-ranked linebacker in the 2018 class, Teradja Mitchell has been waiting his turn behind talented players for three seasons. He has always had plenty of hype surrounding him, but the logjam at linebacker in front of him seemed to hold Mitchell back. Now the path to stardom is clear. Mitchell is a powerful, old-school middle linebacker who can provide a physical presence for the Silver Bullets defense. He’ll certainly be among the best linebackers in the room. Can he become the superstar he expects to be? That is yet to be determined.

Dallas Gant:Â Another linebacker from the class of 2018, Dallas Gant has also waited his turn to become a playmaker for the Ohio State defense. Gant was slated to break out this spring for the Buckeyes, but he suffered an injury and was out for most of camp, holding him back from securing a coveted starting slot early in the spring. Gant, now healthy and ready for the season, still has a chance to do that in August, and he’ll be a key piece to the Buckeyes defense this fall. 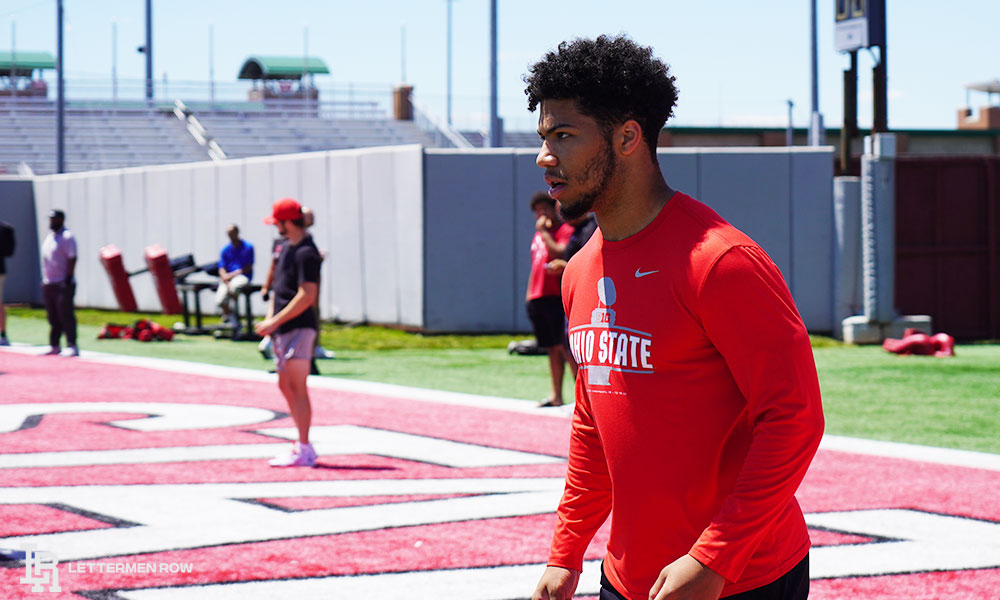 Ohio State linebacker Cody Simon has a chance to break out this fall. (Spencer Holbrook/Lettermen Row)

Cody Simon:Â If the Buckeyes have a breakout star this fall in the linebacker room, it might just be second-year linebacker Cody Simon. After showing glimpses during the odd, pandemic-shortened season last year, Simon was a star during spring practice while the linebackers room was thin and other veterans were out with injuries. Simon has every skillset necessary to be a phenom at linebacker, and he could crack the starting lineup in just his second year in the program. He’ll have to fight other veterans for key reps, but Simon will certainly be in the mix to break out and become a component of the Buckeyes defense.

In linebacker mix for Buckeyes

K’Vaughan Pope:Â Yet another member of the 2018 recruiting class, K’Vaughan Pope has been learning from veterans ahead of him for three seasons. With plenty of experience and two career interceptions, Pope has shown he can be a a contributor for the Silver Bullets defense. Now he must prove he is ready for an even bigger, expanded role in the defense to the coaching staff. If he does that this fall, he may be a surprise starter at Minnesota.

Tommy Eichenberg:Â One of two linebackers from the 2019 class, Tommy Eichenberg played sparingly in 2019 and was a part of the loaded linebackers room a season ago. He now has a chance to emerge as a contributor for Al Washington, especially after four linebackers left from last year’s roster. Eichenberg was one of the breakout candidates for the linebackers unit in the spring, as the Buckeyes were dangerously thin. He took most of the reps at linebacker and can carry that momentum into fall camp, where he can carve out a big role. 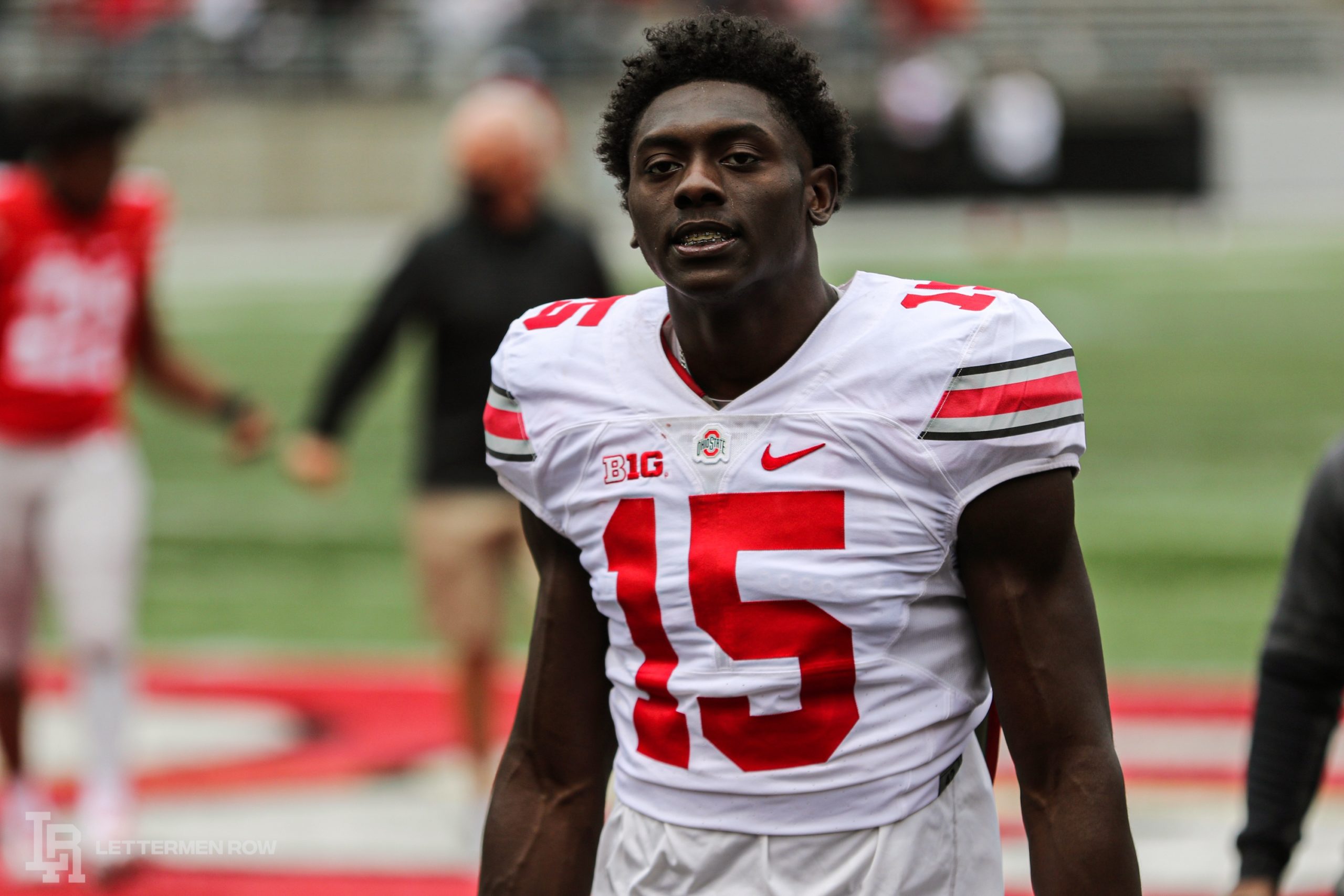 Craig Young: Possibly the most versatile player on the roster, Craig Young has a chance to become a hybrid star for the Ohio State defense. Young can run like a safety and hit like a linebacker, putting him in prime consideration to be a Bullet player for the Buckeyes. His size, length, speed and athleticism allow him to do things in coverage other linebackers can’t while still possessing linebacker traits. Young will be a factor in the Ohio State defense. Will he start at Bullet or a linebacker spot?

Palaie Gaoteote: The former five-star recruit and USC star is enrolled in classes at Ohio State, but he’s not on the football roster just yet. Our Austin Ward reported that sources with direct knowledge of the situation indicated that Gaoteote would still need to file a waiver with the NCAA to be cleared to play at Ohio State this season. If he is able to join the football roster, Gaoteote would instantly become a factor in the Ohio State linebackers room.

Mitchell Melton: After showing potential during his freshman season last year, Mitchell Melton was having an incredible spring session before suffering a spring-ending injury. He most likely will not be back in time to contribute this season, and even if he does get fully healthy, he’ll be playing from behind.

Steele Chambers: The Ohio State athlete is still listed as a running back on the official roster. But Steele Chambers was seen at Ohio State recruiting camps helping with linebacker drills and then was in pictures on social media with the entire linebacker room and Al Washington. All signs point to a position change for Chambers, and he could help bolster the depth on the defense if that is the case.

Reid Carrico:Â The only linebacker in the 2021 recruiting class, Ironton native Reid Carrico showed up in the spring and immediately began showing why he was a coveted linebacker and top-100 player in his class. Carrico already has had his black stripe removed, signaling an official entrance into the program. Now he has to shine in the fall and prove he can play at an elite level to earn playing time early in his career — and set himself up as one of the future leaders of the unit.