He’s a potential top-10 pick on the No. 2 team in the country that has been favored by at least a touchdown in every game this season. But this week at the Fiesta Bowl as part of the College Football Playoff is different. It’s finally a time that the Buckeyes can truly call themselves the team not expected to win.

Clemson is riding a 28-game winning streak and has talent all over the field. As game predictions continue to roll in, the Tigers are the trendy pick to win and get to New Orleans. Some Ohio State players felt they were snubbed during postseason awards. There have been rumblings of disrespect.

The Buckeyes wouldn’t want it any other way.

The disrespect of the Buckeyes wasn’t apparent when they were ranked No. 1 just one week before the final College Football Playoff rankings came out. Then the selection committee dropped them despite three straight top-10 wins. And J.K. Dobbins got buried behind Jonathan Taylor in All-American voting. And Ohio State was omitted from the “DBU” debate on ESPN during the Heisman Trophy presentation.

There’s plenty of ammunition for the Silver Bullets and the entire Ohio State roster. Clemson has traditionally been the team trying to find a lack of respect as motivation. The Buckeyes can channel that Saturday, too.

“We both have an argument,” Dobbins said with a smile when asked if he or Clemson tailback Travis Etienne was more overlooked this season. 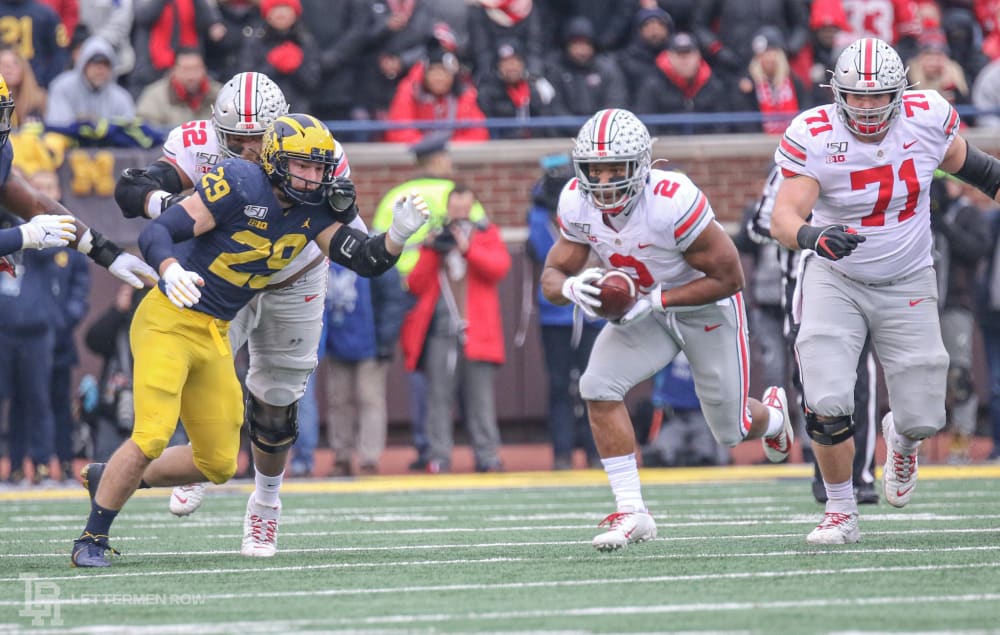 Ohio State running back J.K. Dobbins has a chip on his shoulder heading into the Fiesta Bowl. (Birm/Lettermen Row)

Dobbins certainly has a reason to gripe. He barely saw action in the second halves of games this season; the Buckeyes were beating opponents so badly that Dobbins wasn’t needed in the second half of most games. He still finished with more than 1,800 yards on the ground and 20 touchdowns. But those stats, despite the lack of second-half action, still couldn’t buy him an award beyond splitting all-c0nference honors.

The chip on Dobbins’ shoulder is massive, and the entire roster of Buckeyes has taken a similar approach.

But the holistic approach for the Fiesta Bowl isn’t changing at all. Ohio State has remained focused on what it can control. That’s how it has been preparing all season as favorites, when the Buckeyes have been thumping teams throughout their schedule. That isn’t going to change just because they’re underdogs for the first time since last season’s game against Michigan, a game they dominated.

“It’s really just about taking care of what I can take care of,” Okudah said. “For me, I really don’t worry about who’s across from me, I just study my film, approach every matchup the same and I know that if I have a good game plan every snap, I should do just fine.”

This Ohio State team knows how to play as an underdog. It knows how to channel motivating factors and disrespect.

It’s just rare when the Buckeyes get to enjoy a little disrespect.