Ohio State: What to make of early over/under win total for Buckeyes

The speculation, debate and conversations about Ohio State never end, and Lettermen Row is always ready to dive into the discussions. All week long, senior writer Austin Ward will field topics on Ryan Day and the Buckeyes submitted by readers and break down anything that’s on the minds of the Best Damn Fans in the Land. Have a question that needs to be tackled, like the one today about the earlyÂ projection for the Ohio State win total? Send it in right here — and check back daily for the answers.

Coming off back-to-back Big Ten championships, it’s no surprise that the reigning kings of the conference again have the highest win total in the early over/under lines. Even with Urban Meyer gone, the expectations for the Buckeyes haven’t changed a bit, and Ryan Day will also go into his first season with undoubtedly the most talented team in the league.

For the record, the number is 10 for Ohio State, and the under is listed as a slight favorite according to the betting lines at BetOnline. That puts them just ahead of rival Michigan (9.5 wins) and Penn State (8.5), and is another reminder that any path to the Big Ten crown goes through the Buckeyes. Considering the recent track record of the program, the roster Day inherited and the almost certain improvement on the defensive side of the ball, Ohio State would again appear to be a spark pick to hit the over.

So, why is that a slight underdog? 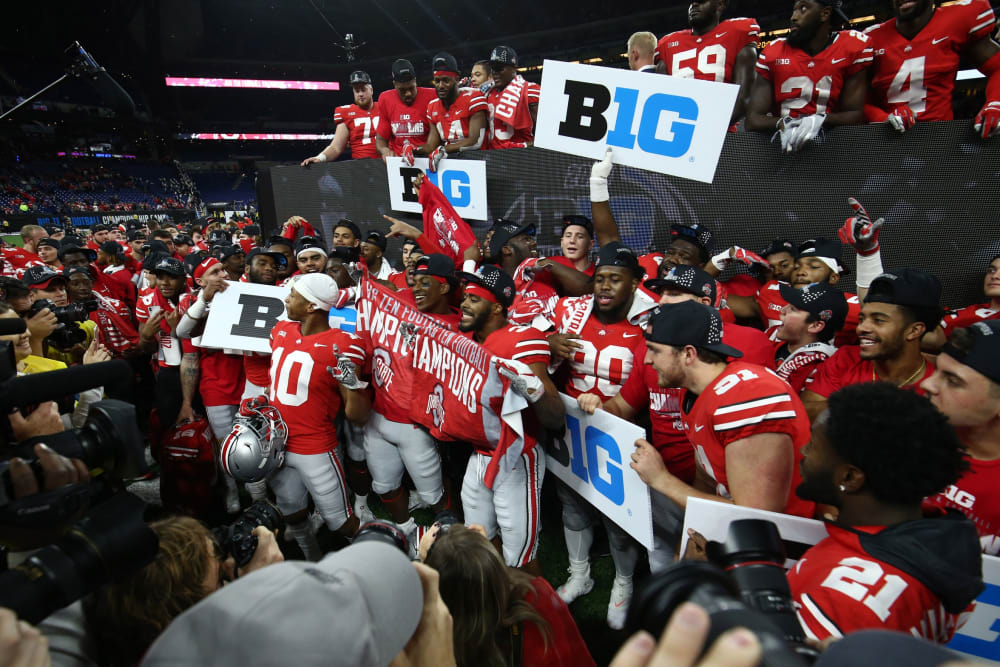 One reason is the schedule, which is challenging almost from start to brutal finish. The Buckeyes should absolutely expect a test in Week Two when Luke Fickell brings surging Cincinnati back to take on his alma mater. And the opening month will end with a road test at Nebraska against a team that gave Ohio State fits last year and should be improved in Scott Frost’s second campaign. Having Northwestern and Wisconsin round out the crossover opponents is about the toughest draw possible from the crossover opponents from the West Division. And then there’s the bizarre stacking of Penn State and Michigan during the final two weeks of the regular season that will really test the resolve of these Buckeyes.

But another key factor in that number right now? It’s still too early to know for sure exactly what Ohio State has at quarterback, even if the betting odds are also putting Justin Fields among the top contenders for the Heisman Trophy. The transfer from Georgia obviously arrived with huge expectations, but he still has to win the starting job officially first in a battle against Matthew Baldwin. He still has to learn a complicated playbook, still has to develop chemistry with a new set of receivers and still has to show he can handle the pressure that comes with not only leading Ohio State, but also living up to the new standard set by Dwayne Haskins.

There may also be a wait-and-see approach with how the defense will improve after the worst statistical season in school history. But even without a revamped coaching staff, Ohio State was due for a massive step forward thanks to the loaded depth chart and the return of veterans like Jordan Fuller, Malik Harrison and Damon Arnette who could have left early for the NFL.

That win total, then, makes sense to try to get action both ways. And it is, in fact, really early to making any definitive predictions after just two practices in spring ball. But the program is going into the first season under Ryan Day as the odds-on pick to win the Big Ten once again, and it isn’t usually the smartest idea to bet against the Buckeyes.