INDIANAPOLIS — Not even the nightmare year could stop the Ohio State dominance.

Certainly 2020 gave the Buckeyes its best shot with a fresh batch of weirdness and unexpected setbacks, and a feisty Northwestern squad also gave the reigning Big Ten champions a worthy challenge.

But eventually the supreme talent, relentless effort and winning mentality made the difference as Ohio State claimed a fourth-consecutive conference championship with a 22-10 win over the Wildcats on Saturday at Lucas Oil Stadium.

The Buckeyes were uncharacteristically out of whack on offense. The defense had to be duct-taped together at times after a rocky start. And obviously Ohio State was still missing a handful of key contributors in the midst of the pandemic that has produced so many hurdles to simply playing the sport this season.

None of it stopped Ohio State from putting its hands back on the title trophy that has essentially taken up permanent residence in the Woody Hayes Athletic Center. And with that championship secured, the next step is almost definitely going to be in the College Football Playoff.

The bottom line: Ohio State proved its championship mettle even in a game where it didn’t remotely play its best. The crown still belong to the Buckeyes.

That observation starts the post-championship breakdown as Lettermen Row dives into its Snap Judgments. 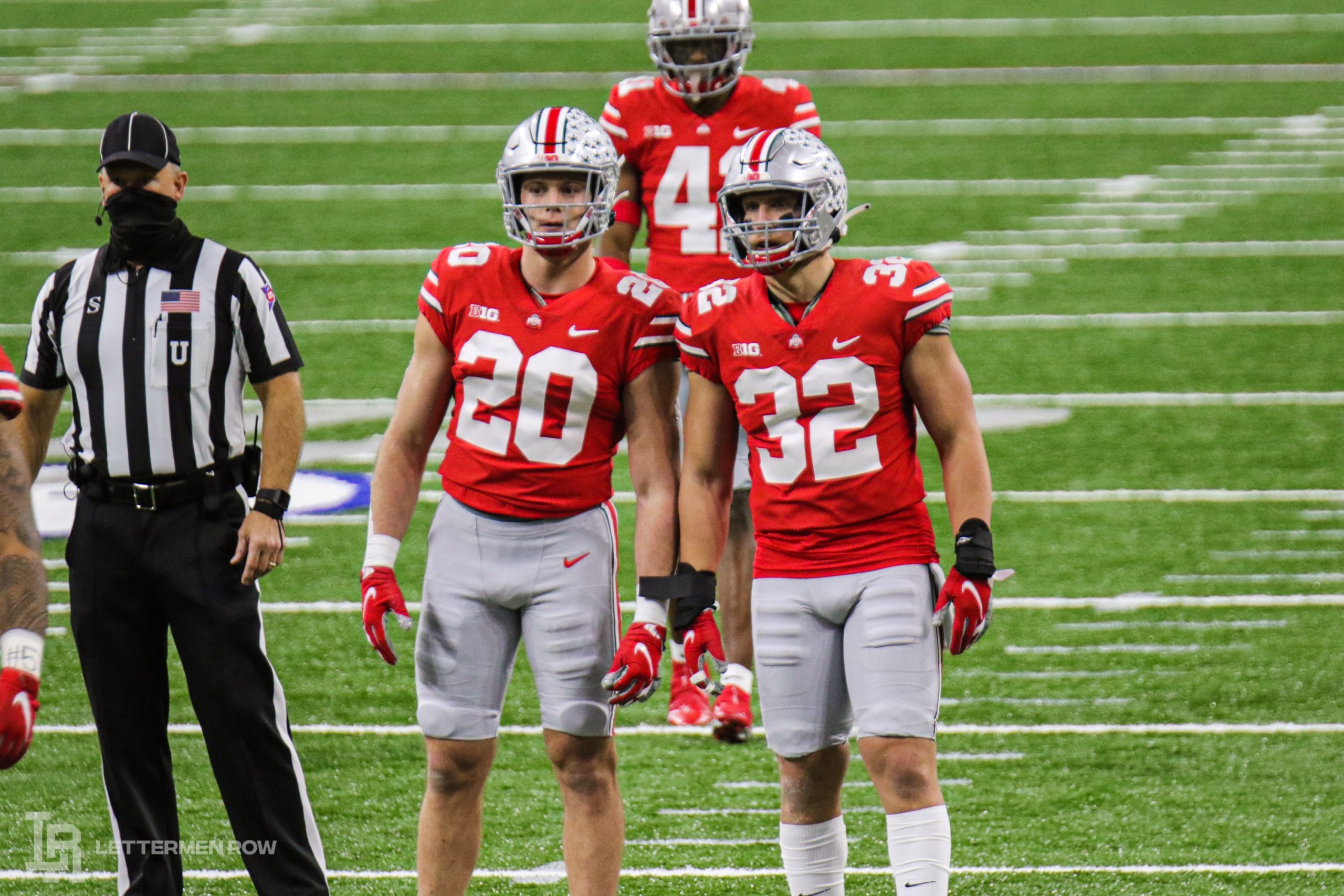 The Ohio State linebackers got the job done. (Birm/Lettermen Row)

After all the adversity Justin Hilliard has faced, it’s a tribute to his resilience that he was even still around to play in the Big Ten championship as a sixth-year senior. The fact that he’s now playing the finest football of his career is even more remarkable, and the Buckeyes might have been lost without the veteran at linebacker on Saturday. His third-quarter interception was quite simply a game-saver, and he was seemingly all over the place to scoop up a fumble or to come fill the box and shut down the Northwestern rushing attack. He was overshadowed by Trey Sermon’s rushing brilliance when it came down to the Big Ten MVP voting — but Hilliard’s performance will never be forgotten by the Buckeyes.

The absence of Chris Olave seemed to loom large for Ohio State, even though there was no reason for that to be the case. Julian Fleming has announcing his presence as a future star at wide receiver, Trey Sermon was chewing up huge chunks of yardage and the talent edge was undeniable for the Buckeyes. And yet Ohio State went into the locker room at halftime without having scored a touchdown, an almost unthinkable occurrence for an attack with so many weapons and a superstar quarterback.

Nobody is perfect, of course, and Ryan Day is just as entitled to make occasional mistakes as anybody else. From unnecessary trick plays to appearing to abandon the run in the first half, the Buckeyes coach certainly didn’t have his best stuff rolling early. Obviously losing a security blanket like Olave is a big deal, but it didn’t have to be that much of a factor against Northwestern.

Ohio State had one safety listed as unavailable going into pregame warmups, then two more were ruled out before kickoff — including starter Marcus Hooker. Of all the issues for the Buckeyes to deal with after a season of uncertainty in the secondary, not having what amounted to the top-three picks to play the primary role in the backend of the defense loomed largest. Josh Proctor is more than capable of filling that role, and he did so against the Wildcats — and made one of the most significant plays of the afternoon with his third-quarter interception. Still, his athleticism is generally preferred elsewhere, and that forced first-year defensive coordinator Kerry Coombs to get more creative. After an early touchdown drive, the Silver Bullets did just that and more than held up their end of the bargain. 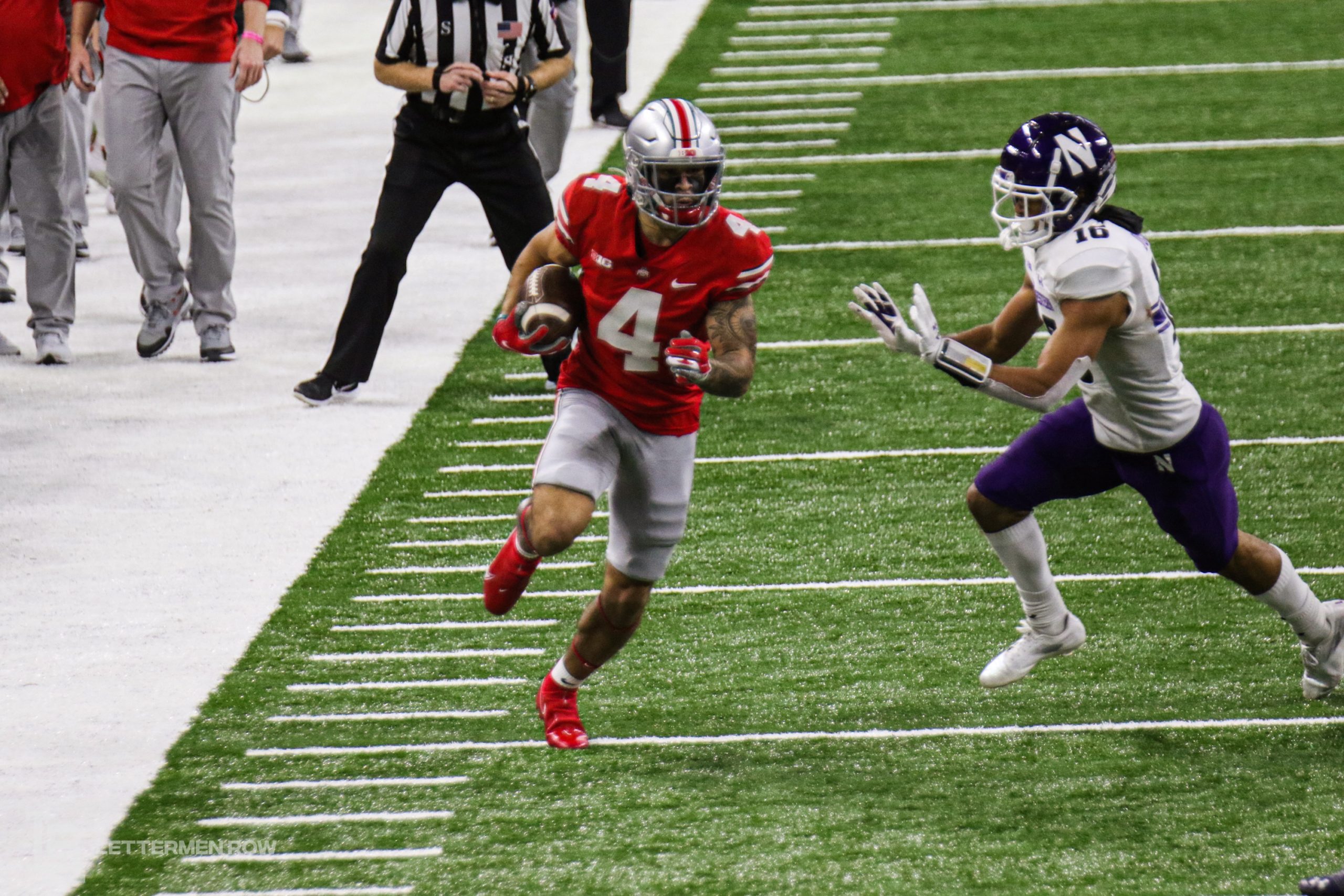 Aside from the dominance on the ground, the other reason the Buckeyes didn’t really have to panic about losing an elite target like Chris Olave is because the nation’s top-ranked wideout from the previous recruiting class is ready to blossom into a superstar. The freakish freshman isn’t yet a finished product, but he’s clearly going to be a handful for Big Ten cornerbacks for the next two seasons — and he could have arguably been used even more against Northwestern. The passing attack was clearly off kilter, but Fleming’s four catches for 53 yards were a glimpse at the future. Watch out: The Buckeyes have their next great receiver picking up steam.