Stay in touch or be left out because Ohio State recruiting is a 24-hour, seven-day-per-week obsession. What’s the latest news as the Buckeyes build for the future? Get that and more Sunday through Thursday on Lettermen Row. Sunday’s update reviews the Buckeyes key official visit weekend and reflects on the biggest news and notes from a huge one-day football camp on Saturday.

There are a lot of moving parts during an official visit weekend, some of that because visits start at different times so kids aren’t leaving at the same time. But as of Sunday afternoon, a majority of the top prospects who made their way to Columbus this weekend have departed campus and are either en route home or have already arrived at their destinations.

At the risk of sounding generic, the Buckeyes had a pretty good weekend. But to this point, the dividends are still waiting to be reaped.

We’ll start with the weekend’s highest-ranked visitor, Salpointe Catholic (Tucson, Ariz.) 5-star running back Bijan Robinson. First, there’s this idea that Robinson isn’tÂ wanting to leave the West Coast for college, and the fact that he’s told Ohio State repeatedly he wanted to visit Columbus and then followed through on that desire without incident is telling. There were some rumors on Friday night that Robinson wasn’t making the trip, but there was no validity to any of that talk and there was no concern from the Ohio State point-of-view that he wasn’t going to arrive.

Robinson is flying back to Tucson now and responded to Lettermen Row’s request for an update by letting us know he’d provide some feedback on his trip when he landed in Arizona. What he did say was that the trip was “great,” and multiple sources close to the Ohio State side confirmed that, underscoring the point that Robinson hasÂ always expressed real interest in the program and that this never felt like a guy taking trips just for fun.

Robinson visited the school with his mother and his grandparents, who certainly aren’t flying to Ohio for giggles. There is aÂ serious interest from the Robinson camp in the Buckeyes.

More on that later after a full conversation with Robinson.

Ohio State also hosted running back Blake Corum, the country’s 17th-ranked tailback. Corum is a lot higher on the Buckeyes big board than most people are acknowledging as he doesn’t speak much about his recruitment.

Been working my whole life for moments like this⭕️#buckeynation pic.twitter.com/rDHfsDtMuw

It’s an interesting tactic to bring in multiple players at the same position on the same weekend, but since Ohio State is clearly after two running backs in 2020, it’s easy enough to navigate that conversationally. The tea leaves have had Corum leaning in Michigan’s direction for some time now, but Tony Alford hasn’t been sitting idly by here. Ohio State is working hard to recruit the 5-foot-9, 180-pound Corum. He’ll visit the Wolverines next weekend and a decision could come soon after that.

Texas 4-star defensive lineman Vernon BroughtonÂ made his way to town and the Buckeyes rolled out the red carpet for him and his family. But any optimism about his recruitment isn’t likely to yield much fruit. Broughton’s likely destination is Texas, and that’s not changing. Ohio State definitely has given him plenty to consider with a friendly depth chart and Larry Johnson’s history of producing superstar defensive linemen. Broughton was hosted by Buckeyes freshman Zach Harrison.

“The visit was a chance to sit down with Coach Johnson,” Broughton told Lettermen Row. “That’s what it is, I mean, he’s the best at it.”

Broughton and his family also enjoyed getting to know Ryan Day.

“That was the first time I’ve gotten to know Coach Day,” he said. “My family loved. He’s really a good dude, he was like, a normal guy.”

Tx to the ⭕️… #Buckeyes 🌰 pic.twitter.com/JyPMhdlJGS

Colorado offensive lineman Reece Atteberry didn’t make his scheduled official visit this weekend as the BuckeyesÂ could be done recruiting the offensive line in 2020, though some speculation remains that they’d like to add one more prospect to the class with the hope of that being another tackle prospect, not an interior lineman.

Ty Hamilton sees a different side of Ohio State, no decision yet

Another of the weekend’s official visitors was Pickerington North defensive lineman Ty Hamilton. The young brother of Buckeyes senior Davon Hamilton, Ty is the state of Ohio’s 26th-ranked prospect. The 6-foot-3, 250-pound end has been to campus so many times that it feels like old hat most of the time, so he was pleasantly surprised by the opportunity to see and feel something different at Ohio State.

“I think what made it different was actually being around what could be my future teammates,” Hamilton told Lettermen Row. “Seeing it from their point of view and being with Coach Johnson, having him break down what my future could be like at Ohio State to the fullest extent.”

Hamilton visited Penn State officially a week ago and had a scheduled visit to Michigan next weekend, though he’s told Lettermen Row that will no longer take place. For those who assume he’s a lock to follow in his brother’s footsteps, he suggests that’s not necessarily true.

“This is a tough decision because this will determine where I will be for the next 3-5 years,” he said. “Where I go, that decision comes from me and my family, not because the people want it or expect it. Fans are going to be fans and they just want to see their team be the best, but as long as I know what I want, Iâ€™m cool.

A choice from Hamilton could come at any time, and though the decision will be a tough one, it sure feels like it will end up with him committing to the Buckeyes.

I am very proud and blessed to receive an offer from my dream school THE OHIO STATE UNIVERSITY ❤️🌰📍@OhioStateFB #GoBucks pic.twitter.com/J0oXO2xxyq

A 6-foot-1, 205-pound rising-junior, Johnson is the country’s 15th-ranked safety in the Class of 2021 and Ohio’s 12th-ranked prospect, but that’s a number that is sure to move in the future. Johnson worked privately with linebackers coach Al Washington for almost an hour on Saturday, showed real explosion in and out of breaks and looked like the ideal candidate for Ohio State’s Bullet position.

“This offer from Ohio State, honestly, it means a lot to me,” Johnson told Lettermen Row. “This is my dream school. Ever since I saw Troy Smith conquer [Michigan] it sparked the fuel inside of me.”

Johnson said he was surprised by the timing of the offer but was confident in his abilities heading into the camp. 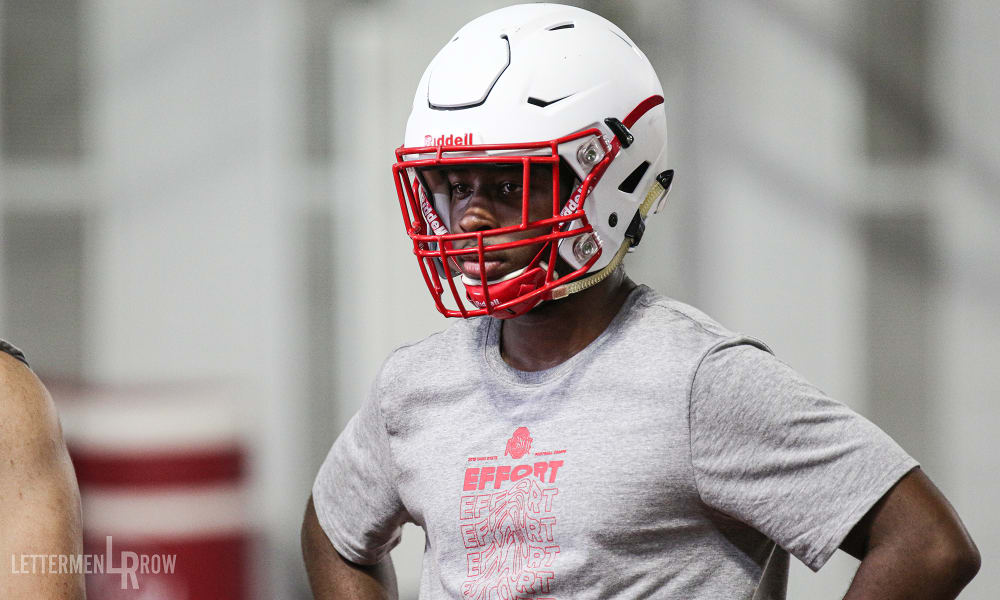 “I knew coming into the camp that there would be some great competition,” he said. “I just had to put my head down and go to work.Â I love Coach Washington’s way of teaching and how he mentored me. The way he worked me, it was like I was an incoming freshman. The drills, the technique, the speed. Everything was amazing.”

The Queen City standout told Lettermen Row he could be back in Columbus two more times in the upcoming week, but he doesn’t plan on making a commitment anytime soon.

“I might return to campus on Wednesday, but definitely Friday I’ll be there,” he said. “Wednesday I’m going to go over some film and see the things I need to work on. Friday theyâ€™re having a 2021 event, so I may possibly be there both times.”

There were a handful of new offers extended by Ohio State on Saturday following the almost 900-participant, one-day camp. Aside from the aforementioned Jaylen Johnson, these young players added a scholarship from the Buckeyes.

Here are some other key notes and news from Saturday’s one-day camp: