EAST LANSING, Mich. — Nobody knows for sure what style points are needed for Ohio State.

Is it winning without Ryan Day on the sideline? How about handling the loss of three offensive linemen while still lighting up the scoreboard? Unleashing a dominant defensive outing despite missing a captain at linebacker and one of the most valuable pieces of the secondary? Maybe it’s a Heisman Trophy candidate putting his all-world skills on display from start to finish?

If those all count on that scorecard, count Ohio State’s 52-12 demolition of Michigan State on Saturday afternoon as a resounding success. It’s hard to imagine what else the Buckeyes could have needed to do as they kept themselves on track to defend their Big Ten title and return to the College Football Playoff.

Simply getting back on the field was a major accomplishment for the Buckeyes after their cancellation last week and the challenge of getting a COVID outbreak under control with the program. But if they were going to chase down their goals, they had to be ready once they got back to action — and they sent a clear message about their championship credentials by taking apart Michigan State.

Bottom line: Ohio State doesn’t even need style points this season, but it grabbed some anyway on the trip to Michigan State.

That takeaway starts the Snap Judgments at Lettermen Row as Ohio State stayed unbeaten heading into the final week of the regular season. 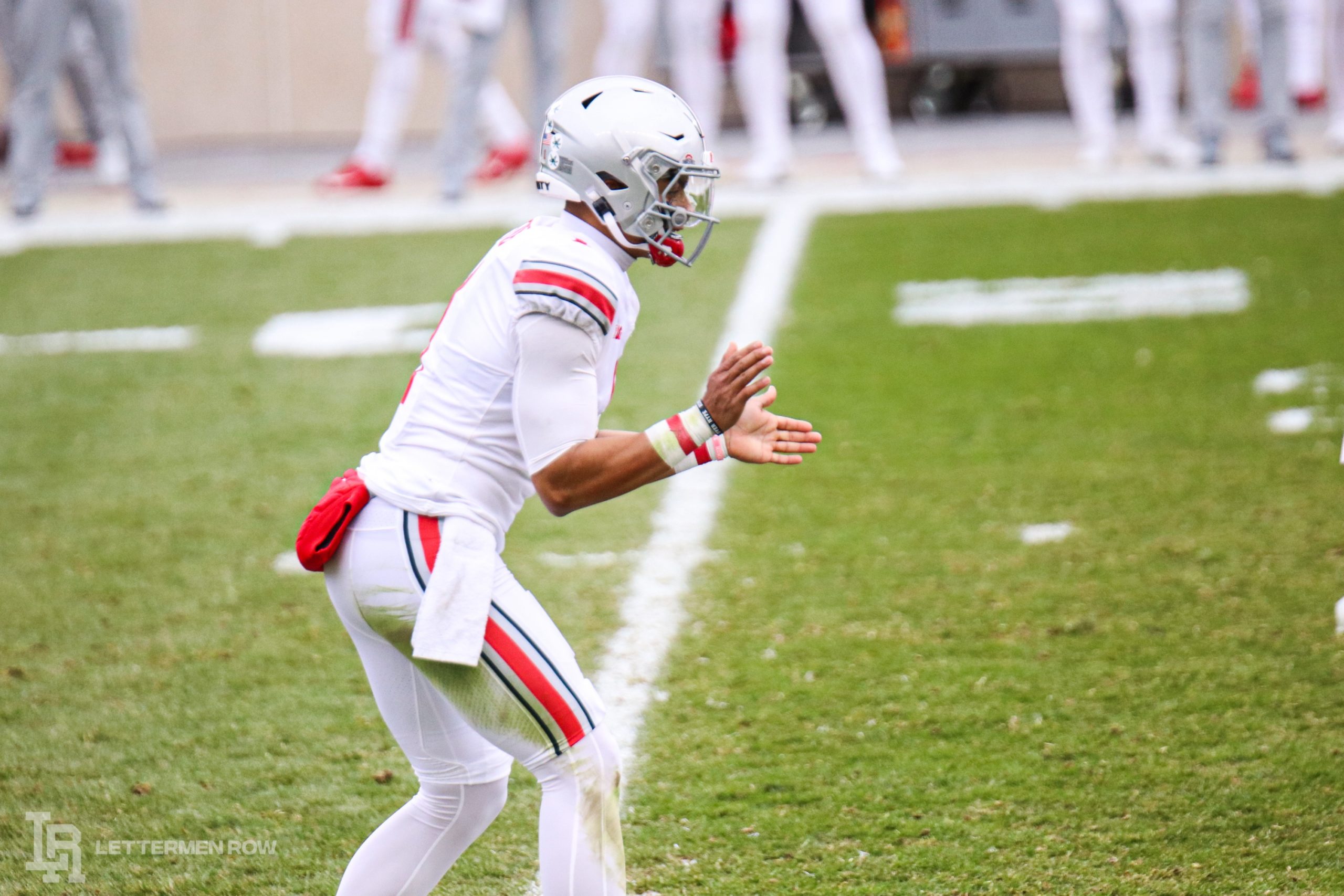 Justin Fields put himself right back in Heisman Trophy race

Don’t send in those ballots just yet, Heisman Trophy voters. Justin Fields isn’t done making his case, and he left little doubt that his three-interception outing two weeks ago was simply an aberration for one of the most gifted players in the country.

Fields was sharp with his decision-making, accurate with the football as usual and carried the Buckeyes with his legs when it was required in what could have become a disjointed performance behind a makeshift offensive line. Perhaps his most impressive feats came when he was just corralling errant snaps, putting his old skills from the baseball diamond to good use while Harry Miller worked out the kinks at center. The junior quarterback is simply a special talent, and as long as he’s healthy the Buckeyes are a national-title threat.

Certainly the level of competition was far different than a couple weeks ago, and Michigan State won’t ever be confused with an offensive powerhouse. But that doesn’t diminish the suffocating performance from the Buckeyes at all, particularly given the notable absences with Tuf Borland and Josh Proctor unavailable for the trip north.

Haskell Garrett again will steal the spotlight thanks to the pass he tipped to himself for an interception and touchdown in the second quarter. But he had plenty of company as the Silver Bullets were as aggressive, physical and energetic as they’ve been all season. Pete Werner continues to be criminally underrated nationally for his impact at linebacker, and he was again dynamic alongside Baron Browning. Ohio State didn’t get tested much in the secondary, so that might still be an open question. But the front-seven made sure that didn’t make any difference against the Spartans. 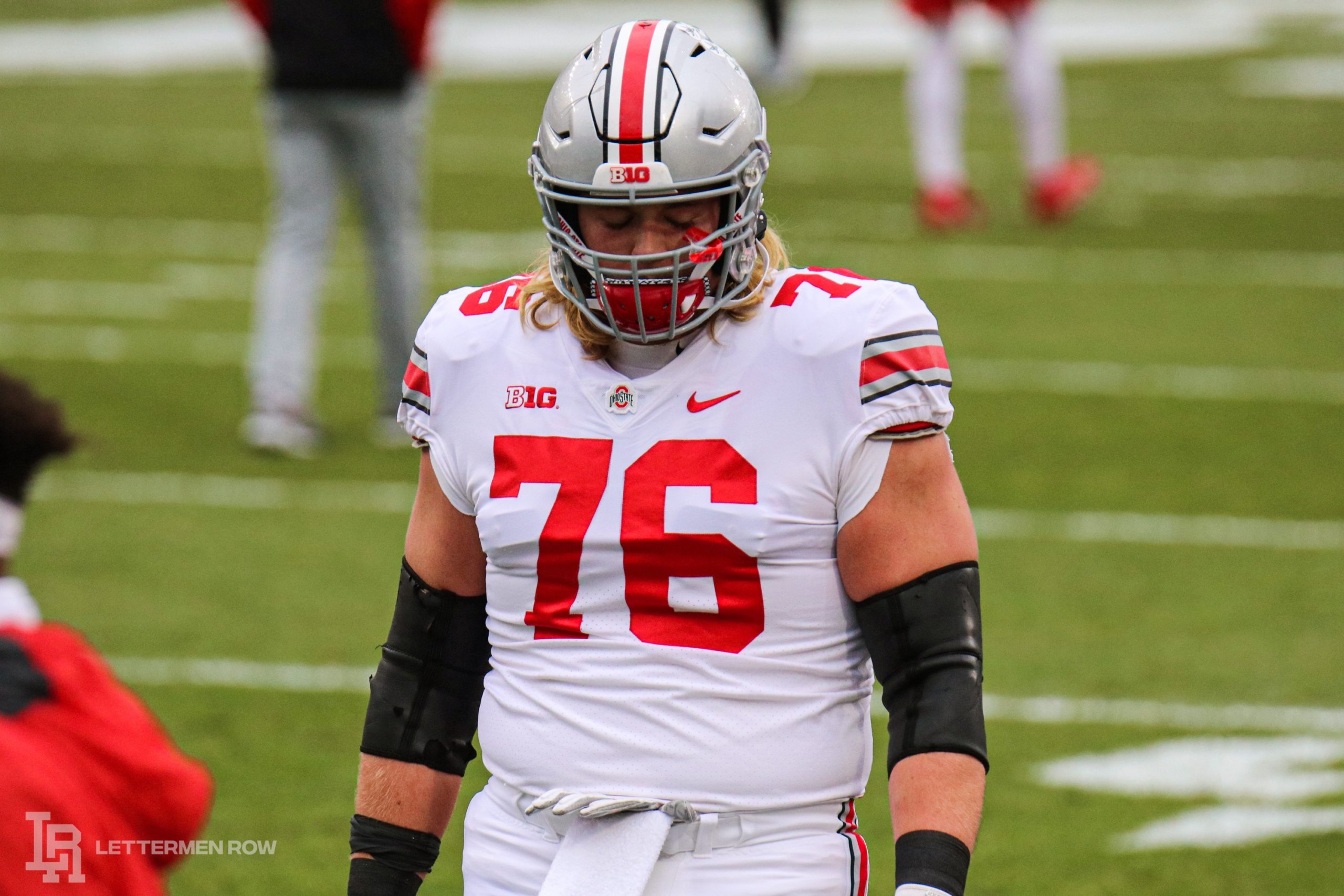 Ohio State offensive lineman Harry Miller had to fill in at center for the Buckeyes. (Birm/Lettermen Row)

The center of the future was needed in the present, and that was certainly a tall order for Harry Miller on relatively short notice since he’s been playing guard all season and is still relatively early in his development there. So, first and foremost, it’s important to keep in mind that nothing about the transition or filling in for arguably the best center in the country should be considering easy.

That doesn’t mean the snapping issues can be dismissed, because that was clearly a problem that at a minimum disrupted the offense and at worst could have opened the door for a huge upset. Fields kept that from happening with his quick hands and feet, but assuming Myers is out again next week, Miller will have to take a big step forward to help out his quarterback.

Ohio State has plenty of depth in reserve

The Buckeyes obviously aren’t the only team dealing with COVID issues. It’s a challenge that every program in the country has to manage — but there are probably only one or two that could hope to do it as well as Ohio State thanks to the elite recruiting and development that go on in the program.

That doesn’t mean that it should ever be taken for granted what the Buckeyes did in blowing out a conference opponent on the road with so many key contributors missing. Without a ton of previous experience, Dawand Jones and Max Wray stepped up in a huge way at tackle, Dallas Gant helped plug a hole at linebacker and Ronnie Hickman started flashing his potential in the secondary. If the Big Ten doesn’t adjust its COVID protocols to match the new CDC recommendations, the Buckeyes are likely going to be just as short-handed again next week. And based on the way a bunch of new faces handled their opportunity against the Spartans, that shouldn’t be much of a problem.