But a championship contender never truly goes on pause, and the Buckeyes probably won’t really get the breather they deserve once they land back in Columbus on Tuesday afternoon after the lopsided loss in the title game.

The players obviously won’t be going straight back into offseason workouts, so that’s at least a little bit of time to relax available there. But given the margin of defeat Alabama rang up in the 52-24 decision at Hard Rock Stadium, the high-achieving Buckeyes aren’t likely to want to take too long before they get back to work. And with the potential ramifications of Urban Meyer appearing set to take over in Jacksonville and likely to pursue some Ohio State staffers to join him, plus some recruiting battles and NFL Draft decisions that will shape the roster, Ryan Day isn’t likely going to be spending any extra time at the beach.

“We need a break,” Ohio State coach Ryan Day said. “We need to get away. The kids, guys are missing their families, and we all just need a break.Â We’ve already started to put together the schedule for the spring, but we all need to get away for a while.

“This has been a long, long road. Guys miss their families, and they deserve time to be with them.Â We’ll unwind for a little while, have an opportunity to reflect on what the season has been, and then get back into it. But you’re right, you can’t just go back into work here. You need some time to rest and reflect.”

Even without playing a full schedule, the Buckeyes went through an unprecedented grind just to play eight times and get to the final game with a shot to claim the national crown. And they will certainly need time to recover physically and mentally after everything they went through dating back to the cancellation of spring camp in March, the quarantines in the summer, the lack of a normal training camp, an unpredictable schedule — and the annoying daily COVID tests.

But there will obviously be a balancing act for the Buckeyes to manage if they plan on returning to the sport’s biggest stage next year. So, on the heels of the loss in South Florida, Lettermen Row is looking at the lessons learned in the loss to Alabama and what is coming next for the four-time defending Big Ten champs. 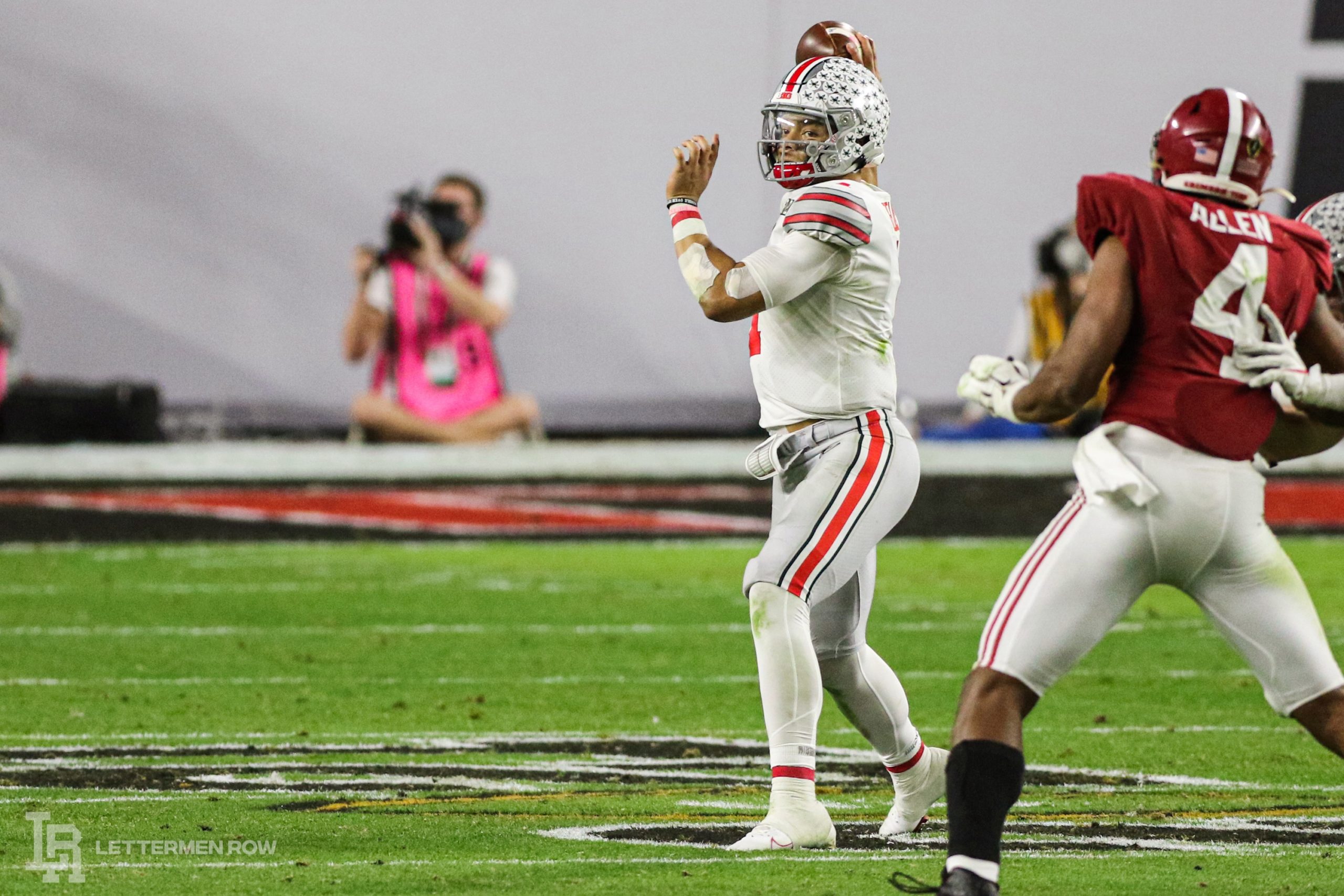 Replacing Justin Fields will be tall task for Ohio State

The hints have always been there, and Justin Fields dropped a couple more even without coming out and confirming that he’s going to enter the NFL Draft as he talked about all the guys he’s going to miss after the season. The junior’s stock really can’t get much higher even if he could obviously improve his game with another year of development under Ryan Day, especially if it’s a normal one without all the disruptions Ohio State faced. So, Fields can’t be blamed at all for moving on — which opens up a fascinating competition to replace perhaps the best quarterback in program history.

Freshmen C.J. Stroud and Jack Miller didn’t get the amount of reps they would have anticipated thanks to the abbreviated schedule, and they’ll be joined by early enrollee Kyle McCord when spring camp opens. All three of those passers have elite potential, but the lack of experience will be a concern for a program with championship talent loaded up in every other unit. It can’t be ruled out that Ohio State would look for a veteran in the transfer market just to add to the competition and potentially provide a safety net, but replacing somebody as special as Fields is a tough task.

The pressure from the Rushmen wasn’t quite to the level the program expects or what it needed against the star-studded Alabama offense. And while it’s easy to point to the absence of Tommy Togiai and Tyreke Smith as the issue on Monday night, the way the Buckeyes have consistently rotated suggested there should have been guys ready to step into the void — no matter how good those two linemen have been. It’s also not fair to suggest the Next Man Up approach is always going to work flawlessly and without any drop-offs in production, and clearly there was compared to the dominance in the Sugar Bowl.

So, what does the title-game outing mean moving forward? That likely depends on what Togiai and Haskell Garrett decide about their futures on the interior and if Smith elects to stick around for another year. If Ohio State gets all three of those guys back, it has the makings of a truly dominant, veteran unit that can power the Silver Bullets on the way back to the College Football Playoff. On the flip side, the Buckeyes could face a rare offseason of questions about Larry Johnson’s defensive line if there are defections in addition to the loss of senior captain Jonathon Cooper. 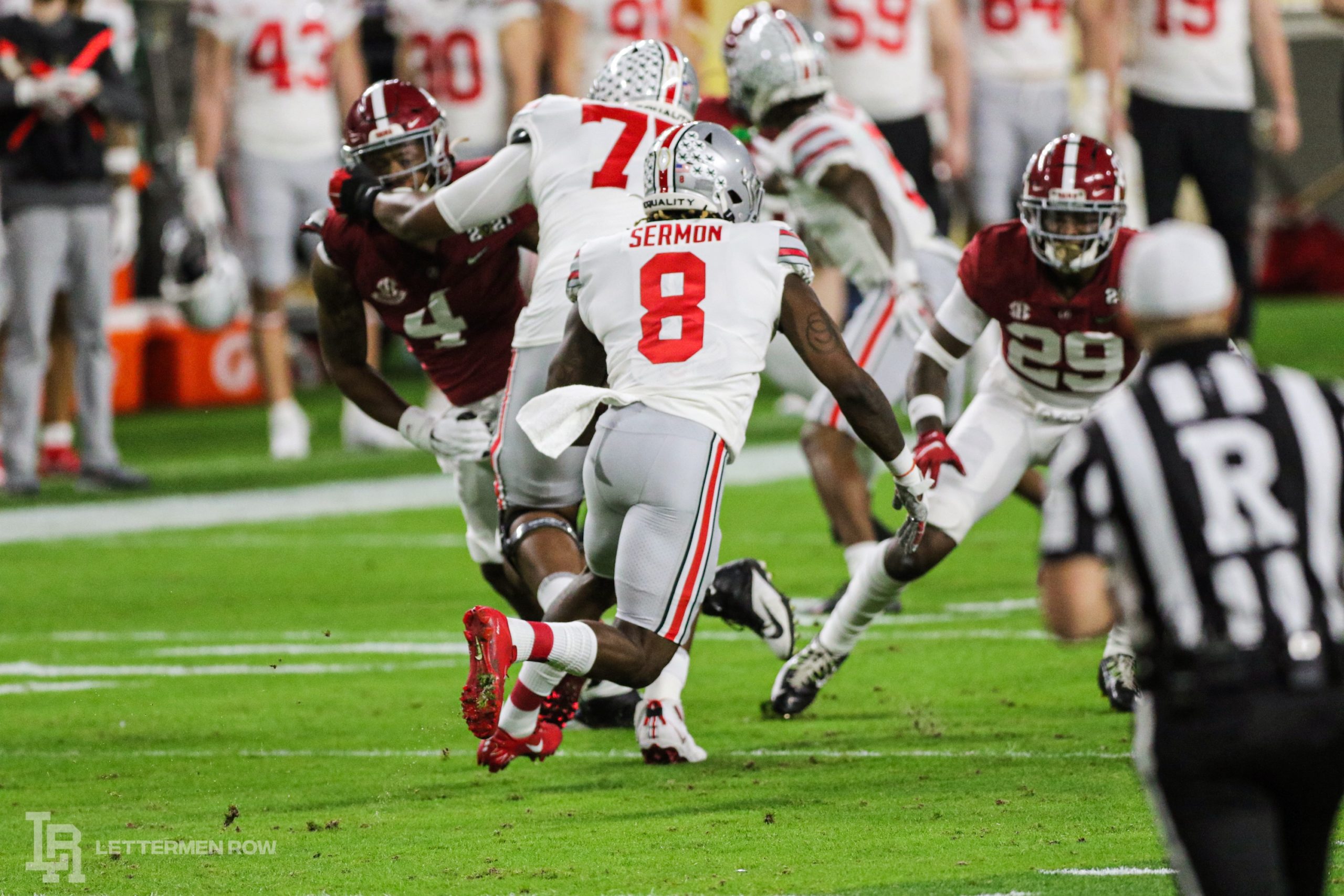 Ohio State running back Trey Sermon got hurt on the first drive of the title game. (Birm/Lettermen Row)

The Buckeyes needed somebody to emerge as the leader in the backfield before they could shift away from a split workload, and Trey Sermon did just that late in the season as he went on an epic, record-setting run. But his injury on the opening drive against Alabama clearly impacted what Ohio State could do offensively, even if it was able to weather the storm for most of the first half thanks to a couple scores from Master Teague.

But the limitations with his straight-ahead style compared with the vision and cutback ability of Sermon eventually became more obvious as the game went on with Teague averaging just 4.3 yards per carry — a number that dropped to 2.6 on 14 attempts if his long of 29 is removed from the equation. Ohio State likely would have continued to use talented freshman Miyan Williams if he was available, and the insertion of Marcus Crowley into the lineup after not playing a game in more than a year made clear the staff knew it needed a different spark. Those two will go into spring vying for the starting role, and they’ll also be pushed by highly-touted newcomers TreVeyon Henderson and Evan Pryor. Ohio State running backs coach Tony Alford has proven he can push the right buttons with his tailbacks, and he’s got a fascinating situation ahead of him.

Buckeyes have major work to do in secondary

Ohio State was so dominant against the rush that it could afford to give up some yardage through the air. The Buckeyes also had justifiable excuses they could point to after losing three NFL defensive backs from last season, not getting a spring camp to work with new defensive coordinator Kerry Coombs and missing key chances to develop depth when the schedule was shortened multiple times. But that won’t make it any easier to swallow a third outing giving up at least 400 yards passing in the last five games, a jaw-dropping amount for a unit that considers itself the Best in America.

Assuming Shaun Wade is heading to the NFL for good this time, the Buckeyes will have at least that spot to fill at cornerback. Josh Proctor is expected to return at safety, which can be a significant boost as he clearly became more comfortable in that role as the season progressed. Sevyn Banks will weigh his options, but he’s likely going to be encouraged to return for another year with the Buckeyes. From there, Ohio State is going to need a healthy Cameron Brown, steps forward from Ryan Watts and Lejond Cavazos — and perhaps a closer look from Coombs at the kind of scheme that fits his talent the best.