COLUMBUS — Ignoring the rankings has honestly never been any easier for Ohio State.

These Buckeyes are so dominant, so consistent, so incredibly focused from week to week, it’s effectively rendered the made-for-television sideshow on Tuesday nights completely irrelevant for them.

Ohio State wasn’t interested the first time it was ranked No. 1. The Buckeyes never blinked or pointed to the polls as motivation when they dropped a spot without even losing. And they clearly aren’t concerned about potential matchups, where they might play in the semifinal or whether they have enough margin for error to lose in the Big Ten title game and still get into the College Football Playoff.

It sounds simple, but it’s obviously true that winning takes care of everything. And the methodical string of blowouts has sucked almost all of the drama out of the process for the top-ranked Buckeyes while removing a potential distraction inside the Woody Hayes Athletic Center, because there’s been no reason to spend even a second worrying about what the selection committee is up to each week.

“I mean, all I know is we have to go win this game for a lot of reasons,” Ohio State coach Ryan Day said. “The Big Ten championship game is one of our goals year in and year out. So that’s just the focus. 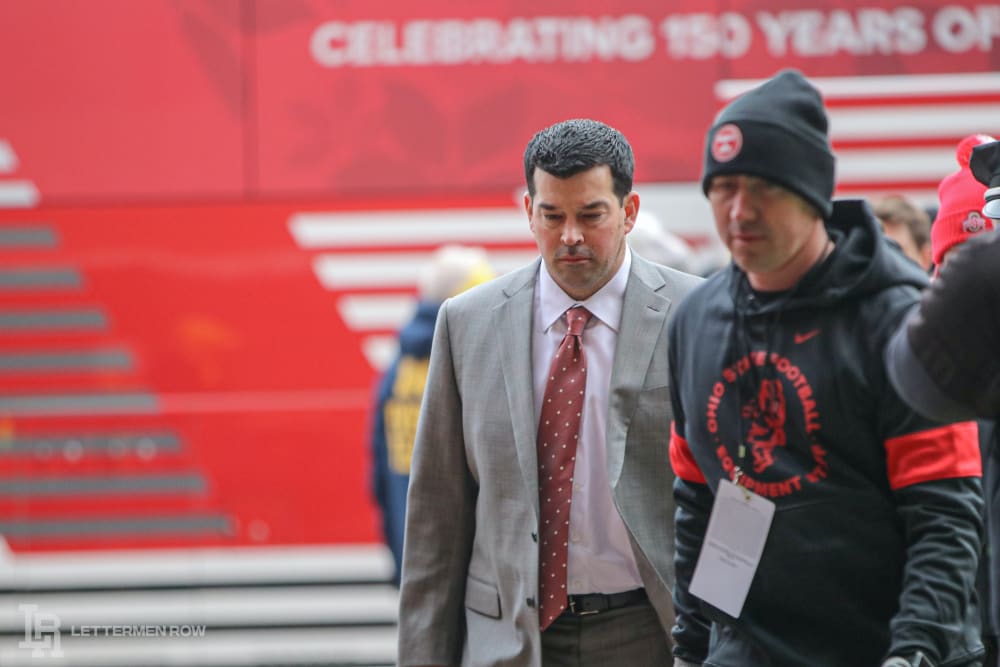 “Certainly for me to speculate on all those things at this point right now doesn’t really matter. I know we have got a great team. We just have to win this weekend. Everything will take care of itself if we do that, focus on that. The other speculation or talk, what-if scenarios for us, for me, doesn’t do us any good right now. Just focus on that finish line.”

The Buckeyes are almost there, and it feels reasonably safe to assume that once they get done in Indianapolis on Saturday night there will be invitation to compete for the national title waiting back at home on Sunday.

Nothing is guaranteed, of course. If Ohio State were to suffer a blowout loss to the Badgers, the remarkable regular season might be overshadowed by the last entry on the resumÃ©. Maybe LSU will put together an impressive performance against Georgia that forces the committee to shuffle the top spot again, ignoring the brutal three-week closing stretch for the Buckeyes against teams the voters all had slotted No. 13 or better last week. And who knows what surprises might pop up on championship weekend that could impact where the Buckeyes are going and who they might face — especially since the committee has already proven how wildly unpredictable and inconsistent it can be from year to year and week to week.

That certainly hasn’t been the case for the Buckeyes this season, which means the safest bet is that it will continue to block out all the exterior noise and deliver another solid outing with a third-consecutive Big Ten crown on the line.

(If the Buckeyes do win again, it’s increasingly looking like Atlanta would be the destination. In the spirit of transparency that the committee typically lacks, Lettermen Row has previously pointed to the Fiesta Bowl as the spot for Ohio State given the familiarity with the venue. But it appears proximity to Columbus would actually win out unless something funky happens in the SEC.)

So, Ohio State has actually proven to be pretty boring when it comes to these weekly status reports from the College Football Playoff voters. There’s been no need for rooting guides outside the conference, meaningful arguments over strength of schedule or soap-box pleas from Ryan Day for the committee to take a closer look at his team.

The Buckeyes have simply gone about their business all season. And they can still safely ignore the rankings until they get the one that counts on Sunday and start preparing for what’s next.